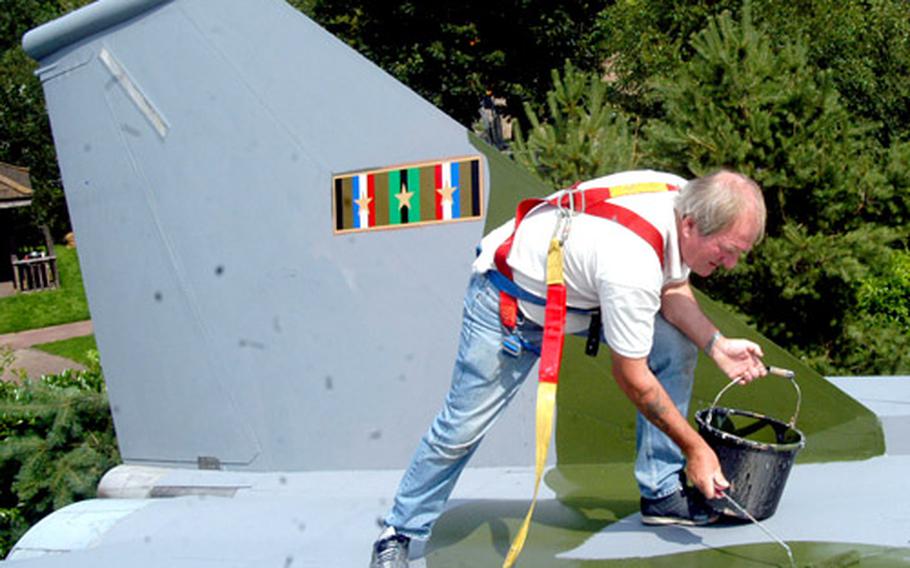 Ken Gibbs of Protective Maintenance Systems in England on Wednesday paints the F-111 that is part of RAF Lakenheath’s static display of aircraft. The base was named the best-looking USAFE base. (Ron Jensen / S&S)

RAF Lakenheath took the top prize in the command-sponsored competition after it was visited Friday by the evaluation team, led by Brig. Gen. Vern &#8220;Rusty&#8221; Findley, USAFE plans and programs director.

Ramstein Air Base, Germany, was the second place winner and receives $50,000.

The program gives the base flexibility on how to use the money.

The competition, which will be held annually, is part of Combat Proud, one of 14 combat and special interest programs initiated last fall by Gen. Robert H. &#8220;Doc&#8221; Foglesong, USAFE commander. It is designed to improve base appearance and develop community pride.

A team visited and evaluated seven major installations in the command before choosing RAF Lakenheath based on factors such as general appearance, building exteriors and base self-help projects.

Matthews said the base responded when Foglesong announced the programs, breaking the base into sectors and putting squadrons in charge of them, much like the Adopt-A-Highway program in America.

He said the base has always looked good, but the effort was to make it look even better.

Lt. Col. D.J. Junio, 48th Civil Engineer Squadron commander, said the base picked up the tempo a bit while preparing for the inspection.

Capt. Kristen Bakotic, the base appearance project officer and member of the 48th CES, said the effort included the entire base population.

The operations for the base are high, with deployments, exercises and inspections coming fast and furious.

People were reminded not to leave trash on the ground around dumpsters and to pick up litter. Thousands of sets of eyes were on the lookout for anything that needed painted, cleaned or otherwise spruced up.

Junio said the attitude fostered by the competition probably would last.