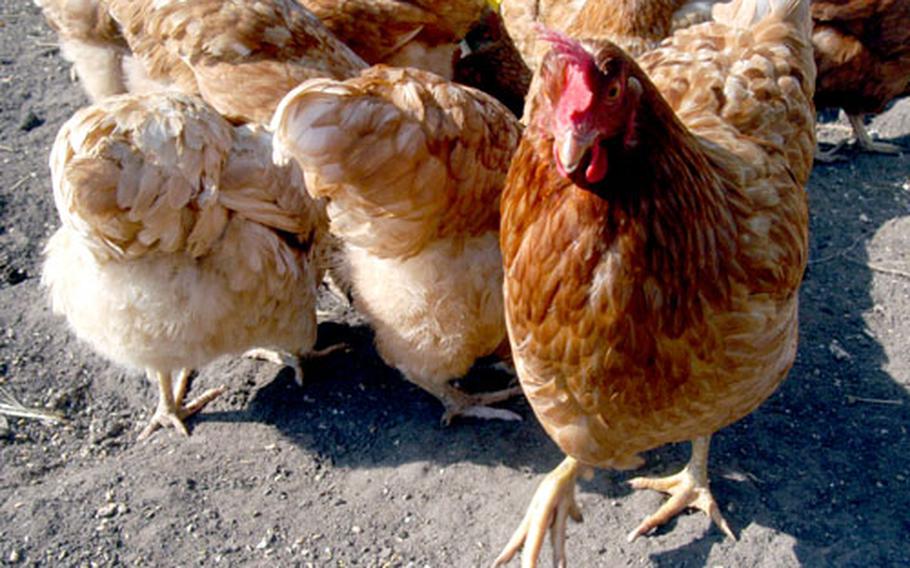 Chickens on a farm outside of RAF Mildenhall that is not within the restricted zone. The hospital at RAF Lakenheath is currently developing an emergency response plan in preparation to a pandemic influenza outbreak. (Sean Kimmons / S&S)

Chickens on a farm outside of RAF Mildenhall that is not within the restricted zone. The hospital at RAF Lakenheath is currently developing an emergency response plan in preparation to a pandemic influenza outbreak. (Sean Kimmons / S&S) 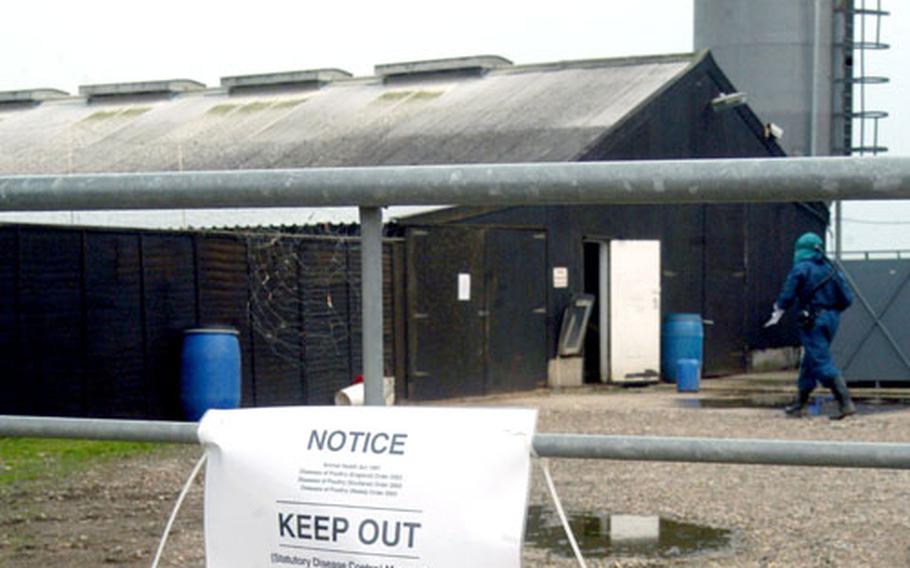 Earlier this month, cases of a low pathogenic form of avian influenza — or bird flu — were confirmed in some British poultry farms, including this one near Dereham, about 35 miles northeast of RAF Lakenheath. (Sean Kimmons / S&S)

The hospital at Lakenheath is developing an emergency plan in case it spreads to people &#8212; not necessarily as a result of the recent confirmations in poultry, said Capt. Johnnie Foster, a public health officer at the hospital.

Chickens at three poultry farms tested positive for the H7N3 virus, which is less dangerous than the deadly H5N1 virus that has killed at least 115 worldwide.

There has only been one reported human case stemming from the H7N3 virus.

Still, 1-kilometer-wide restricted zones &#8212; .62 miles &#8212; have been imposed around the infected sites near Dereham to control the traffic of poultry, other captive birds and mammals.

The chickens that tested positive have been culled and disposed of and the sites cleaned and disinfected, according to the British Department for Environment, Food and Rural Affairs.

U.S. Air Forces in Europe came up with a draft of an influenza response plan last year.

By the end of June, every installation in USAFE will have an emergency plan, he said.

&#8220;The reason that USAFE is so quick to step up to the plate to prepare for this is because this stuff is happening in our back yard,&#8221; he said.

Foster said the plan for RAF Lakenheath will combine the efforts of other units, not just the medical group on base, to help infected people at U.S. bases throughout England.

In a worst-case scenario, about 35 percent of the 15,000 people on the base could be affected by an influenza pandemic influenza, Foster said.

The hospital has a 19-bed capacity, but, in a pinch, the base&#8217;s backup medical facilities, the gymnasium or even a tent city could be used, too, he said.

In the United Kingdom, there have been no medically linked human-to-human cases of avian influenza, and no cases of the H5N1 virus other than a few migratory birds.

Foster said some have expressed concerns about dead birds in the area. People often ask &#8220;what do I do if I find a dead bird,&#8221; he said.

The DEFRA Web site and other credible sites can answer additional questions regarding avian influenza. Furthermore, the U.S. Army Center for Health Promotion and Preventive Medicine has pamphlets on pandemic influenza available throughout the base&#8217;s medical facilities.

Some people at RAF Lakenheath and RAF Mildenhall didn&#8217;t seem concerned about the influenza.

Niles and Perry said they are confident the hospital can handle an outbreak.

Avian influenza is a disease of birds. People can become infected in rare instances. There are many strains of avian influenza viruses, which vary in their ability to cause disease.

In rare cases, some high pathogenic avian influenza strains have led to severe disease and deaths in people where infection has resulted from close contact with infected birds. At least 115 people have died, mostly in Asia, from the H5N1 strain of avian influenza.

There is no evidence that avian influenza can be spread from person to person, but it could potentially exchange genetic material with human influenza and mutate into a new virus capable of doing so. This is what makes avian influenza a potential threat to public safety.

Symptoms of a pandemic influenza range from flu-like symptoms (fever, cough, sore throat and muscle aches) to eye infections, pneumonia, and severe respiratory diseases. Symptoms may depend on which virus causes the infection.

Compiled from information from British Department for Environment, Food and Rural Affairs, and the U.S. Army Center for Health Promotion and Preventive Medicine

A CDC pandemic influenza preparation guide can be found at: www.pandemicflu.gov/plan/ pdf/guide.pdf