RAF Lakenheath construction must work around base's many historic finds 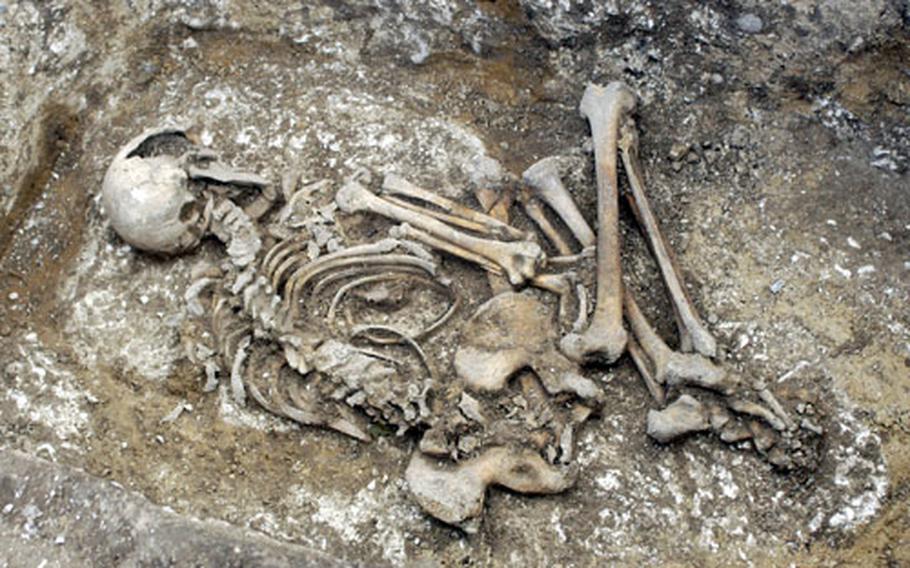 The bones of a 4,000-year-old Bronze Age woman rest in the bottom of a burial pit at a construction site at RAF Lakenheath. Five sets of remains, including three complete skeletons, were found at the site, which will eventually hold new base housing. (Jason Chudy / S&S)

The bones of a 4,000-year-old Bronze Age woman rest in the bottom of a burial pit at a construction site at RAF Lakenheath. Five sets of remains, including three complete skeletons, were found at the site, which will eventually hold new base housing. (Jason Chudy / S&S) 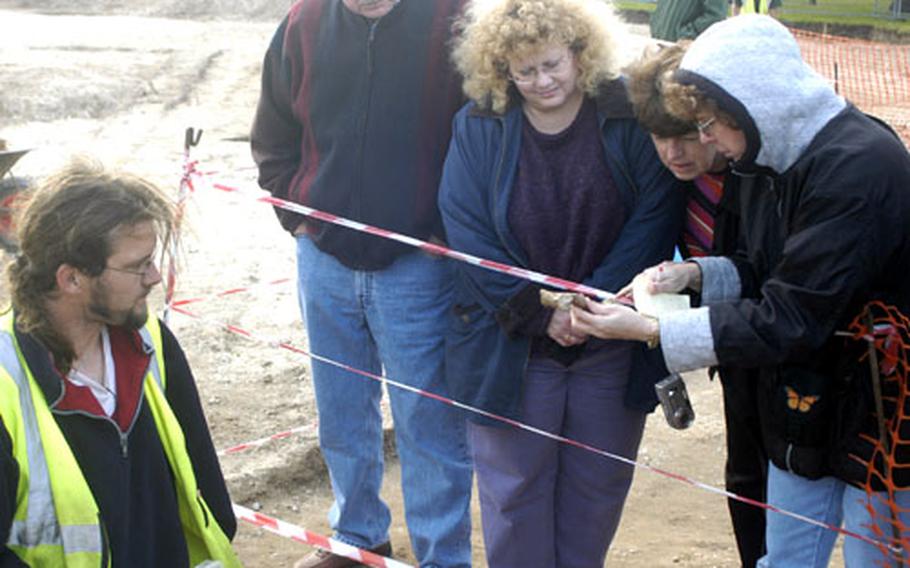 Teachers from RAF Lakenheath schools look at the leg bone of the woman found at the construction site near the base’s Gate 2. The bones were being removed by Suffolk Archaeological Service researcher John Craven, left. (Jason Chudy / S&S) 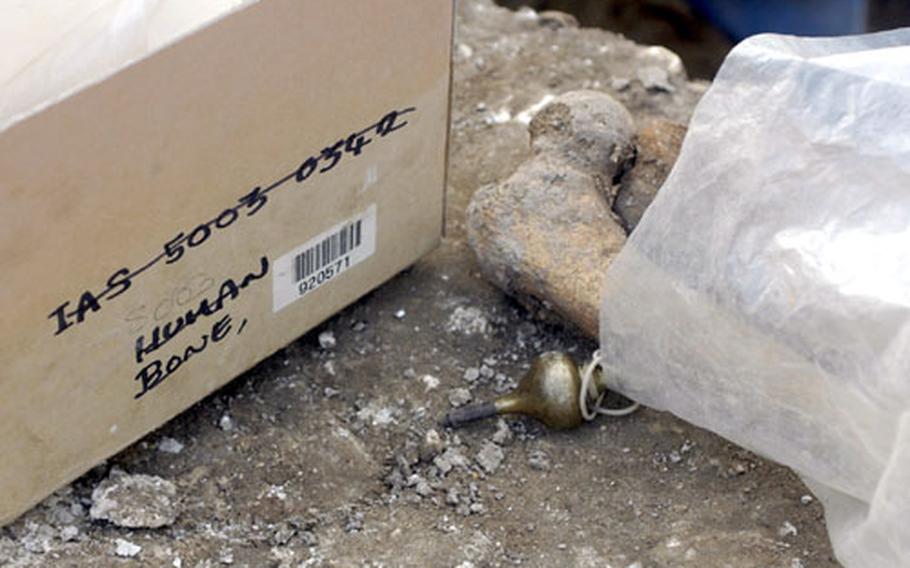 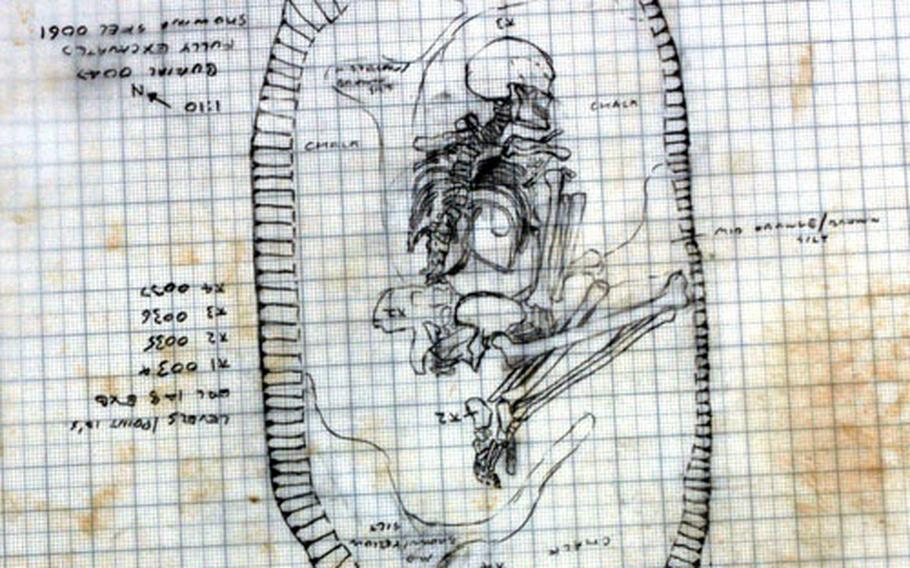 A pencil drawing shows the position of a Bronze Age skeleton found on a construction site at RAF Lakenheath recently. (Jason Chudy / S&S)

As the U.S. Air Force continues building its future at RAF Lakenheath, it sometimes helps reveal the region&#8217;s storied past.

For below the acres of turf turned over recently to make way for new base housing lie the remains of some of Britain&#8217;s earliest residents.

&#8220;Almost every single bone has survived, even the smallest toe bone,&#8221; John Craven, Suffolk County Archaeological Service researcher, said of a perfectly preserved skeleton found last month in a shallow pit near the base entrance.

Craven carefully sketched the position of the early Bronze Age woman&#8217;s remains, interred some 4,000 years ago in a burial mound 100 feet in diameter.

Lakenheath, built at the beginning of World War II and the largest U.S. military facility in England, is now host to about 16,500 airmen, civilians and family members. But the archaeological finds make today&#8217;s population just a blip on the area&#8217;s history.

The English fens, or groundwater-fed bogs, that now make for prime military real estate once were key farming and grazing areas for prehistoric residents. Archaeologists have found more than 200 gravesites and many other artifacts so far, and base officials believe there are more.

Archaeological project officer Jo Caruth said the base is important to Britain&#8217;s history because many of these historic sites were untouched during a post-World War II farming boom.

&#8220;Lakenheath is very well preserved, whereas outside the base this would have been destroyed,&#8221; Caruth said.

The burial sites are so common that some incoming residents have been told to call housing if they ever discover bones while digging in their yards.

So it&#8217;s no surprise to some residents that these historic remains were uncovered in the middle of the base.

For example, less than a mile from the current site, a Saxon burial ground was discovered with more than 250 graves. The site, near the base library, included one Saxon leader who was buried with his horse.

Because such archaeological finds are fairly common, all digging projects must be cleared in advance, said Malcolm Buxton of the base environmental office. If the site hadn&#8217;t been developed or inspected in the past, Suffolk archaeologists monitor any construction in case historic objects are found.

&#8220;We have a much better preservation rate than here than anywhere else,&#8221; said Caruth, adding that not all construction projects yield buried treasures.

But when something significant is found, such as with this Bronze Age burial site, construction takes a back seat to conservation. Base officials move construction to other areas while archaeologists excavate and remove anything important. So far, no projects have seen major delays due to the finds, base officials said.

Eventually, Craven removed the Bronze Age woman&#8217;s skeleton from the burial pit and moved it to the archaeological service&#8217;s office in nearby Bury St. Edmunds.

Four other sets of remains also were removed from the same pit, including the skeletons of a baby and young girl, and bone fragments of two other Bronze Age Britons. Another former Lakenheath resident, whose cremated Iron Age remains were discovered only a few hundred yards away, also is preserved at the office.

Within a few weeks construction will continue on the site, which eventually will hold more housing for the sprawling base.

He paused, then added that there may be a silver lining to the latest construction project.

A history of finds

For nearly 50 years, RAF Lakenheath&#8217;s ground has been yielding insights into early Britain&#8217;s history. Some of the major finds include:

1957: A Saxon cemetery with 33 graves was found near the base hospital.

1987: Remains of two Roman bodies were found near the Auto Hobby Shop.

1992: Objects dating as far back as prehistoric times were found near the base sewage treatment works, including one Roman skeleton and ditches and fences, possibly a sign that livestock were kept on the site.

1992: Three Saxon bodies and other artifacts were found at the maintenance workshop building. Artifacts include bronze coins from the 3rd and 4th centuries, iron and bronze jewelry and an ornamental cosmetics grinder, used to make body paint.

1995: Skeletal remains of a prehistoric boy or young woman were unearthed near the British Ministry of Defense police building during installation of heating pipes. The remains were about 18 inches below the ground&#8217;s surface.

1996-7: Skeleton of a Saxon woman and Roman pottery shards were found near a billeting office as heating pipes were installed.

1998: Saxon cemetery was found on a new dorm site. More than 250 graves were found, including a Saxon warrior with his sword, shield, spear and horse. The skeleton of the warrior&#8217;s horse still had its bridle in place, the first such burial ever found by researchers. The remains were taken to the British Museum in London for further study.

1999: The remains of two Saxon round houses were found during the upgrade of the officer&#8217;s club parking lot. Pottery shards, a hair brush made from an animal bone, and fish scales also were found.

1999: Sixty Saxon graves were found during construction of the Skills Development Center, as well as another buried horse and various period items. The site was believed to be part of the cemetery found in 1957.