RAF Fairford ready to help out as Mildenhall undergoes makeover 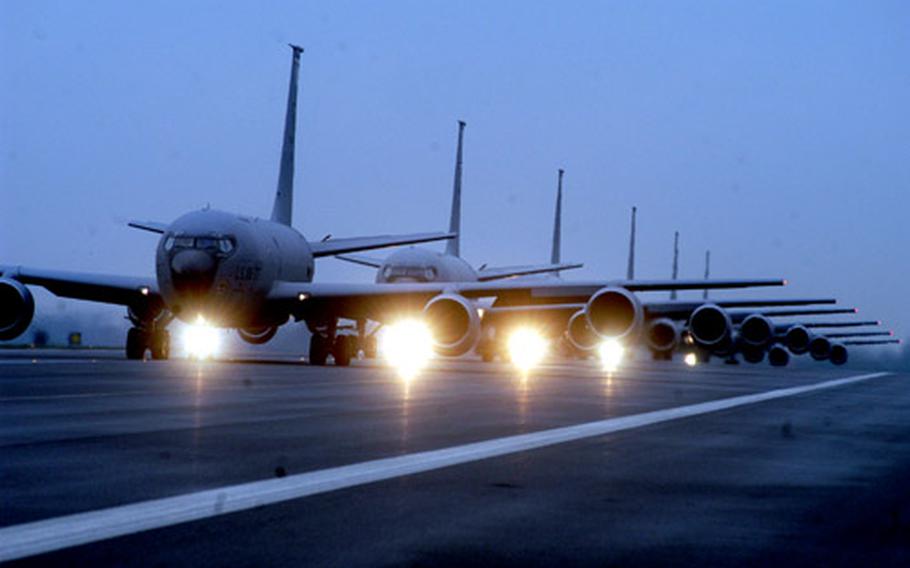 The KC-135 Stratotankers of the 100th Air Refueling Wing, like these on the runway at RAF Mildenhall, England, will soon be flying from RAF Fairford while the runway undergoes a complete renovation. The deployment begins next week and is expected to last until September. (Ron Jensen / S&S)

RAF MILDENHALL, England &#8212; The 100th Air Refueling Wing begins deploying this week to RAF Fairford, about 160 miles to the west, while the Mildenhall runway undergoes a $15 million makeover.

More than 600 airmen and about 14 of the wing&#8217;s 15 KC-135 Stratotankers will move to the base in England&#8217;s Cotswolds region, the home of the 424th Air Base Squadron, during the construction period that should be complete by the end of August.

&#8220;We are not reducing at all our operational capability or level of tasking we can support,&#8221; said Col. Richard Devereaux, commander of the wing that supplies air-to-air refueling for the European theater. &#8220;We will begin our operations there about the 1st of March.&#8221;

He said the deployment should be invisible to U.S. Air Forces in Europe.

Some people are moving this week, but the first aircraft is set to fly next week, with a surge of aircraft following from Feb. 23-25.

Maj. Edwin Skinner, who has been working on the deployment plan for more than a year, said one challenge was finding bed space for 641 airmen at RAF Fairford.

&#8220;We&#8217;re putting everybody on base,&#8221; said Skinner, a pilot. The visitors will even take over some available multiple family housing, as well as some open bay barracks.

All meals will be provided on base. Skinner said the total cost of the deployment will be about $5 million.

A bus will make a daily round trip between the two bases from Monday to Thursday and several buses will run on Friday, Saturday and Sunday. For reasons of accountability and safety, Skinner said, the deployed troops will not take their private cars with them.

&#8220;Spouses are welcome to go down there, but they have to stay off base and provide their own transportation,&#8221; said Skinner.

Meanwhile, construction on the runway will begin almost as soon as the final aircraft takes off, said Cassie Davis, the deputy base civil engineer.

The contractor, Fitzpatrick/TARMAC, a joint British effort, first has to break up 58,000 tons of concrete, which will be taken off base and recycled.

An on-base concrete plant will be built to manufacture 80,000 tons of concrete for the new runway.

Davis said security forces will be searching up to 300 vehicles per day when the effort really gets rolling, as electricians and others come to work on the project.

The runway was built in the 1930s as Great Britain prepared for war with Germany. Although it has been resurfaced, it has never undergone a renovation of this nature.

NATO is picking up $13 million of the cost, with the Air Force chipping in the rest.

The project not only uproots the 100th ARW. The 352nd Special Operations Group, which also makes its home at RAF Mildenhall, will move its nine C-130s to RAF Lakenheath, five miles away. Skinner said an area of that base is being prepared for the temporary visitors. The group&#8217;s MH-53 PaveLow helicopters will remain at RAF Mildenhall and continue to fly.

Skinner said he has requested augmentees to fill gaps as the RAF Mildenhall personnel suddenly will have three bases to support.

Aircraft that fly through RAF Mildenhall carrying passengers will land at RAF Lakenheath, but they will be processed as usual at the terminal on RAF Mildenhall.

RAF Fairford is a contingency base and has aircraft on its ramps only during major operations, such as Operation Iraqi Freedom when B-52s flew missions from there. The normal base active-duty population is about 200 airmen who train to prepare the base to accept aircraft and visitors.