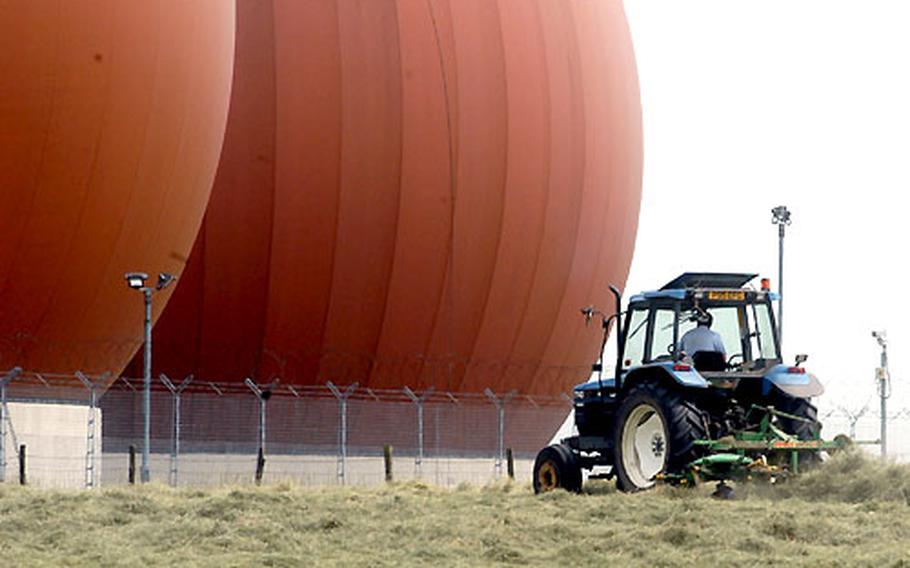 A farmer tends a field beneath the towers at RAF Croughton, England. The communications base has plans to improve and preserve the base ecology. (Ron Jensen / S&S)

Farmers tend most of the 692 acres that fall inside the base&#8217;s perimeter fence. The base, in fact, makes only a timid footprint on the land.

The result is a natural environment that has been barely disturbed for decades. In fact, a community of badgers, a protected species in the United Kingdom, has lived for 100 years beneath a hedge on the base.

Miller said the base is home to plants that have all but disappeared in the overpopulated, overdeveloped areas outside the base. The farmers on base are gentle stewards of the land, rarely using chemicals on the crops they harvest.

RAF Croughton, then, is a confined sample of the natural environment of the Cotswolds as it was 50 or 60 years ago.

Recognizing that, the base and civilian organizations have developed a 10-year plan that will preserve and enhance that environment, even if it means rescuing from extinction plants considered to be weeds by gardeners and farmers.

The Environmental Conservation Group includes Air Force, U.K. military and civilian environmental groups, as well as farmers and interested local residents. The group will oversee tree- and hedge-planting and management of a brook in a way that will invite water voles and water-loving plants to flourish.

The idea is to preserve what remains and invite the return of what used to be.

Cliff Christie, from the Northamptonshire Wildlife Trust, said 90 percent of the limestone in the county is within base boundaries.

&#8220;The limestone produces a wonderful diversity of specialist flora and fauna, which, in turn, supports a huge range of invertebrates lost from many other parts of Britain,&#8221; he said. &#8220;Because the ecological management of the base has remained stable and largely unchanged for the last 100 years, this large area of grassland has become very important.&#8221;

Bev Kelly, community relations adviser for the base, said, &#8220;The plan to start with is to reinstate the trees and shrubs in the center of the base, where it&#8217;s kind of bare.&#8221;

Also, where sheep now graze on much of the base, hedgerows will be planted.

Miller said these have traditionally provided wildlife a sheltered corridor across the countryside.

Kelly said the hedges will be planted in sync with those on neighboring farms so the base will more resemble the surrounding countryside.

Christie said, &#8220;This is a rare opportunity for us to retain our environmental heritage, to improve the ecological diversity and give something back to the countryside.&#8221;