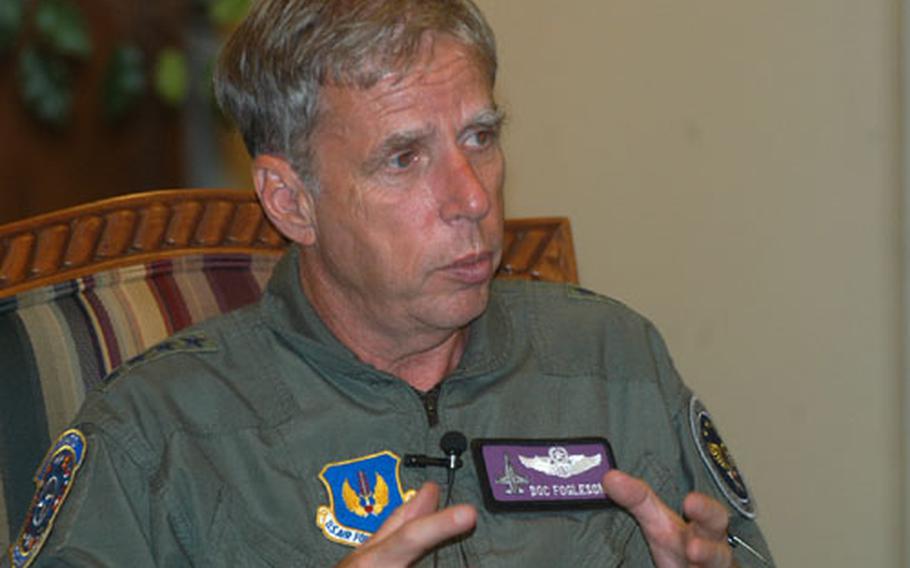 Gen. Robert H. "Doc" Foglesong, commander of the U.S. Air Forces in Europe, says the realignment of the military overseas may yet reach his command. (Courtesy of USAF)

RAF LAKENHEATH, England &#8212; Local governments in eastern England are waiting for details on the troop realignment that may &#8212; or may not &#8212; affect U.S. Air Force bases in Europe.

The county is home to RAF Mildenhall, which is where the 100th Air Refueling Wing is based, and RAF Lakenheath, home of the 48th Fighter Wing. Together, they have about 10,000 active-duty servicemembers.

A spokesman for U.S. Air Forces in Europe indicated in a news report this week that the impact on the command might be slight, which prompted the USAFE commander to add Thursday evening, &#8220;That doesn&#8217;t mean there won&#8217;t be changes.&#8221;

Gen. Robert H. &#8220;Doc&#8221; Foglesong was at RAF Lakenheath to attend an awards ceremony for the Excalibur bombing competition held at the base.

Foglesong said the process should be given time to work. He said USAFE has provided European Command with its suggestions. EUCOM will take the entire package to the civilian leadership in the Pentagon, which then will go to the president.

&#8220;We need to just be a little patient and let [the Office of the Secretary of Defense] go in with some recommendations,&#8221; he said. He did not want to speculate on possible changes.

The issue has boiled in the local press since before President Bush made his announcement Monday that he would realign the military footprint in Europe and Asia. Stories have speculated for months about the future of the bases.

&#8220;I think any reduction in troops in Suffolk would have a major effect on the area,&#8221; Gerald Taylor-Balls told the East Anglian Daily Times this week. He is a parish councilor in Mildenhall.

The paper also reported denials by the Royal Air Force that it was trying to convince the Pentagon not to withdraw the F-15 jets at RAF Lakenheath. A spokesman for the Ministry of Defence told the newspaper &#8220;it is far too early&#8221; to talk about the impact of an American withdrawal.

Foglesong said allies would be consulted and kept informed as the decisions are made regarding the U.S. military presence on this side of the Atlantic Ocean.

Local speculation about the future of the bases includes the planned expansion of London Stansted airport 40 miles to the south. A new runway, due to be built by 2011, has met strident opposition and some have wondered if a flight line abandoned by the United States might be a substitute.

But a group leading the fight against the expansion dismissed that possibility Friday morning.

&#8220;While there might be a readily available runway, it might not be suitable for commercial air traffic,&#8221; said Carol Barbone, spokeswoman for Stop Stansted Expansion. &#8220;We would not see this as a suitable solution.&#8221;

Foglesong said the U.S. Air Force presence in Europe is important for a variety of reasons. It provides fast response to humanitarian problems in this part of the world, as well as ready access to combat operations.

Plus, he said, the training with allies is valuable.

But, he said, the best thing to do is wait for the answers that will come when the time is right.