Radome under way for communications device at Croughton 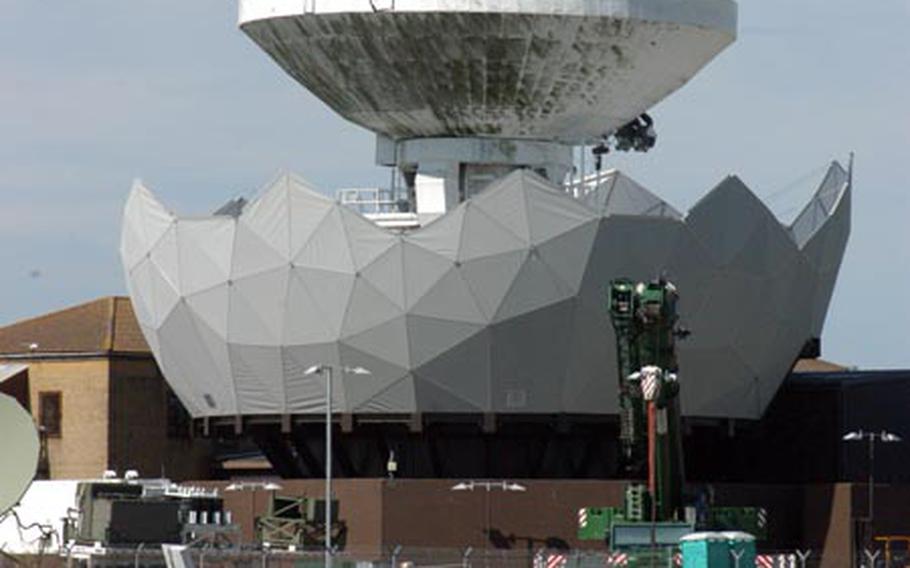 A $3.2 million radome is being built around Croughton&#39;s main 68-foot antenna in order to better protect it from the British elements while increasing the satellite dish&#39;s capabilities. It looks like a half-completed Death Star. (Geoff Z / S&S)

RAF CROUGHTON - There&#8217;s something slowly rising in the fields of Northamptonshire, particularly at RAF Croughton.

It&#8217;s easily spotted on the A43 en route to the base. It looks futuristic and just plain cool, even among the grazing sheep, almost like an earthbound Death Star.

But all "Star Wars" fantasies aside, it&#8217;s actually a radome being built onto Croughton&#8217;s largest communications antenna, one that is a pivotal piece of European and downrange communication networks.

The $3.2 million radome eventually will reach about 90 feet, protecting the 68-foot antenna, according to Tech. Sgt. Joseph Finney, one of the noncommissioned officers on site.

The project has been in the works for the past couple of years, and is an essential upgrade to protect such an important piece of equipment, Finney said, particularly from the wind and rain that besiege the antenna almost daily.

Costly maintenance to paint and keep the antenna functional will be lessened once the radome is complete in January, he said. Right now, high Northamptonshire winds sometimes force operators to point the giant satellite dish straight up to lessen the chance of damage.

While providing critical links for all types of missions in Iraq, the Croughton crews also handle about a quarter of all U.S. European Command data flow, Finney said.

The antenna isn&#8217;t the only thing being upgraded right now in Croughton&#8217;s comms. New frequency converters are being installed to handle greater amounts of data, while freeing up space in the SatCom facility.

The going hasn&#8217;t always been easy. The radome is comprised of hundreds of panels that must be pieced together in just the right order, Finney said. The fact that the dome follows more of a swirl pattern than a perfect circle is also a challenge.

"Everything has to line up perfectly with all these panels of different shapes and sizes," he said. "This is a very unique dome."