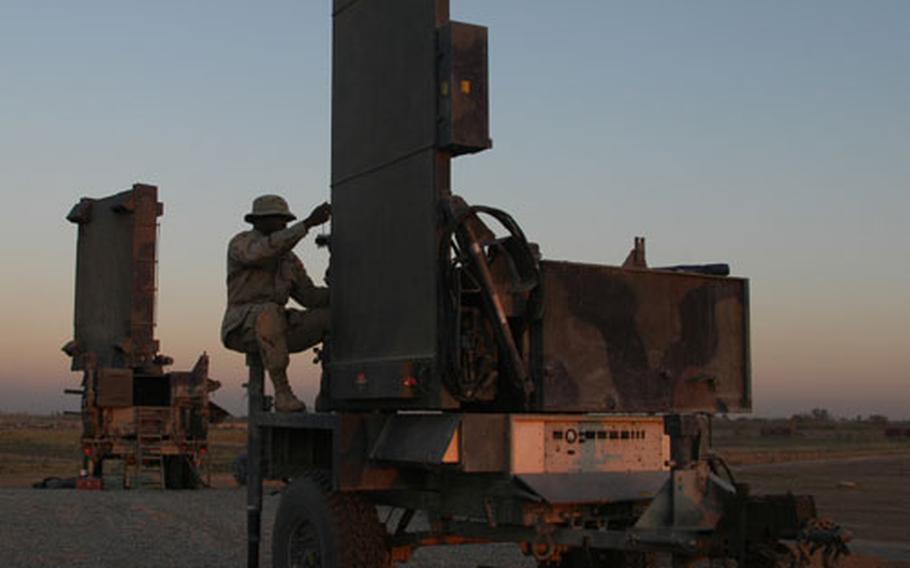 Spc. Nathaniel Rumph, a radar repairman with the 1st Armored Division, pulls maintenance on a portion of the Firefinder radar system at Baghdad International Airport in Iraq. (Franklin Fisher / S&S)

BAGHDAD, Iraq &#8212; On a cool Wednesday night in Baghdad, with the stars bright overhead, Pfc. Ernie Ritacca sits in his mobile radar van, the door open, waiting for signs of &#8220;The Mad Mortarman.&#8221;

Ritacca, 19, of Bullhead, Ariz., is with the 1st Armored Division&#8217;s Battery D, 1st Battalion, 94th Field Artillery Regiment. His van and a few other vehicles are tucked behind an earthen embankment near the flightline of Baghdad International Airport.

&#8220;The Mad Mortarman&#8221; is the nickname some in his unit use for the faceless Iraqi insurgents who have been keeping a steady routine of hit-and-run attacks on the U.S.-led coalition here.

U.S. brass grew so fed up with the attacks that they moved to discourage them by launching Operation Iron Hammer on Nov. 12. They try to learn where the attackers are, then hit them on the spot with artillery, airstrikes, ground troops or some combination of means.

Ritacca operates a radar called the Firefinder, which can do something that might well astonish veterans of Vietnam or earlier wars: It can detect the firing of an enemy mortar, rocket or artillery round, pinpoint its map location, predict where it will land, and even offer a guess as to what type of weapon is involved, all within mere seconds.

&#8220;Less than five minutes are needed before you hit the bad guys,&#8221; from the time Firefinder detects a launch, &#8220;and that has happened here already,&#8221; said Chief Warrant Officer 3 Frederick Theobald, 37, of Fairmont, Minn., a division counterfire officer with Battery D.

For those reasons, said artillery officers within Ritacca&#8217;s unit, the Firefinder has played a valued role in the Iraq conflict, in the Persian Gulf War, and, over the past week, in Iron Hammer.

&#8220;We provide the acquisitions for the common mortar fight, which is a big part of Iron Hammer,&#8221; Theobald said.

&#8220;Particularly in this environment &#8230; the mortars are firing, the radars can home in on them and that&#8217;s important to the people who are actually out there on the streets &#8230; doing the patrolling, doing the checkpoints. These are the people that will be targeted,&#8221; said Battery D&#8217;s commander, Capt. Michael Wood, 37, of Pascagoula, Miss.

The Firefinder sends out a continual signal that creates an electronic &#8220;search fence&#8221; in the air. If, for example, a mortar were fired, its round would have to pass through that fence and would thus be caught in the Firefinder&#8217;s web.

The Firefinder would track the upward arc of the round&#8217;s trajectory and run through its set of high-speed calculations.

And on the dark scope to Ritacca&#8217;s right, a block of lime-green text would appear, with information including target number, the time the Firefinder picked it up, and other details.

The operator hits a button and the information goes straight to the division&#8217;s leadership, who then decides what, if any, countermeasures to take.

On Wednesday morning, for example, at about half past midnight, one of the radar sections picked up an 82 mm mortar launch, and within minutes the division was ready for orders to shell the launch location with 105 mm howitzers, said Chief Warrant Officer 3 Manny Vasquez, 33, of New York City, a division counterfire officer working in the division artillery&#8217;s tactical operations center.

Though the commander opted not to fire in that case, that doesn&#8217;t mean commanders won&#8217;t in other instances, artillery officers said.

Ritacca works a Firefinder variant that is &#8220;optimized&#8221; for detecting mortar fire. In another van a few yards away was Spc. Nathaniel Rumph, 23, of Rochester, N.Y., operating a Firefinder optimized for artillery and rockets.

Neither had heard of Iron Hammer. But both were heartened after being told what it involves and of the role they&#8217;re playing within the confines of their vans.