Raceway on the Venice canals 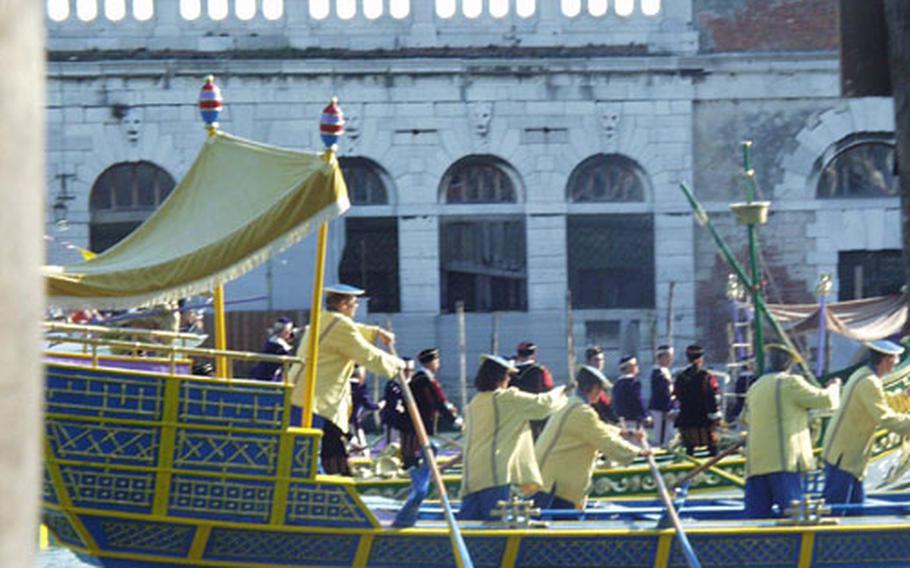 A gondola featuring participants dressed in period costumes makes its way up the Grand Canal toward the Santa Lucia train station on Sunday during the Regata Storica in Venice, Italy. The annual event brings tens of thousands of participants and tourists into the Italian city each year. (Kent Harris / S&S)

A gondola featuring participants dressed in period costumes makes its way up the Grand Canal toward the Santa Lucia train station on Sunday during the Regata Storica in Venice, Italy. The annual event brings tens of thousands of participants and tourists into the Italian city each year. (Kent Harris / S&S) 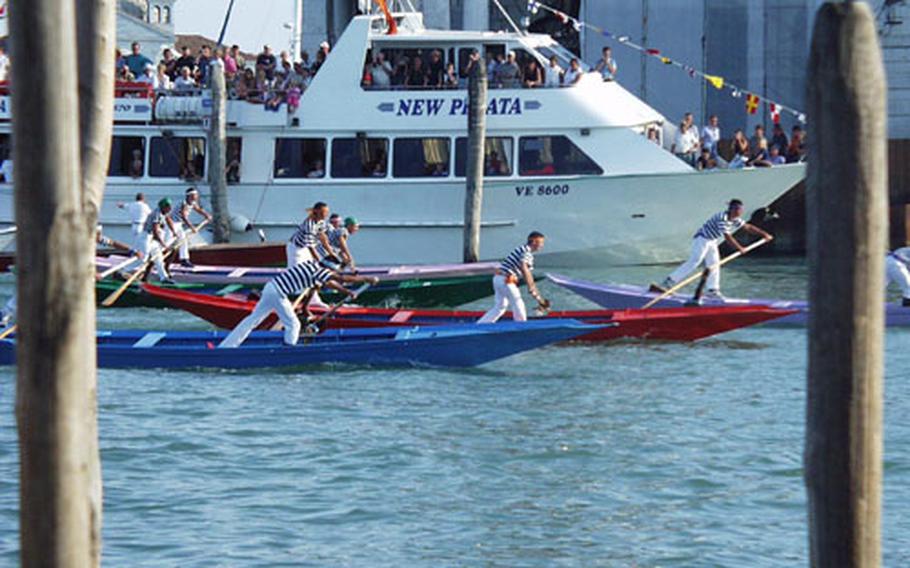 The field is packed as it enters the narrow part of the Grand Canal during the first race of the Regata Storica in Venice, Italy, on Sunday. Following a parade-like exhibition by participants, some dressed in colorful costumes, there were four races held for gondolas in different categories. (Kent Harris / S&S) Dozens of gondolas representing nearby cities or Venice area organizations gather Sunday in the ceremonial portion of the Regata Storica in the grand canal. The Historic Regata celebrates the arrival of the Queen of Cyprus into Venice hundreds of years ago and features several competitions. (Kent Harris / S&S)

VENICE, Italy &#8212; When thinking of this famous city on the Adriatic Sea, one thing quickly comes to mind: gondolas.

Sunday, &#8220;few&#8221; became &#8220;many&#8221; as tens of thousands of Italians and tourists converged on Venice for the annual Regata Storica and packed scores of gondolas of various sizes, colors and designs while they floated up and down the Grand Canal.

Thousands of locals, including Americans stationed at bases in Aviano and Vicenza, arrived by car and train for the Regata Storica &#8212; &#8220;historic regatta&#8221; in English.

Dozens of others came at least some of the way by water, riding in gondolas representing nearby cities in the historic procession. Many of the boats were elaborately designed and decorated.

Just as during Carnivale, some people took the event more seriously than others.

&#8220;They definitely go full out and make a big deal of the regatta,&#8221; said Melissa Devine of Rhode Island.

She and her friends had seen a regatta along the Amalfi coast south of Naples a few years ago.

It wasn&#8217;t exactly a soccer crowd. But thousands of people lined the banks of the Grand Canal, watching the decorated gondolas go by before the competition started. Many others booked passage on boats, water taxis and tourist gondolas to catch a glimpse of the action out on the water.

The event didn&#8217;t really end until it started to get dark. That&#8217;s when the final of the four races finished, leaving only the normal contingent of water craft ferrying people on the famed canals.