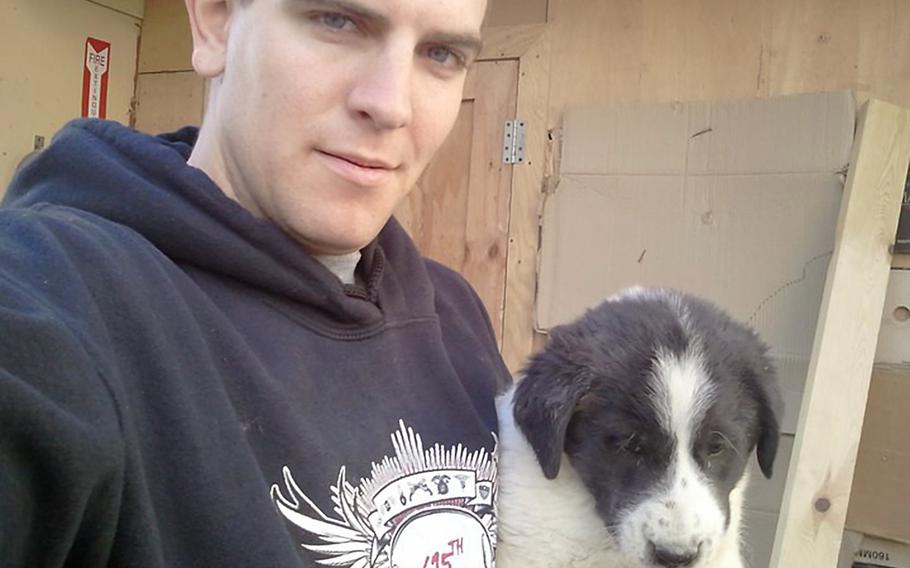 Spc. Kevin Shumaker holds a puppy on Combat Outpost Base Chamkani, Afghanistan. Shumaker, 24, died of rabies in August 2011, seven months after being bitten by a dog while breaking up a dog fight on the base. His death was the first confirmed military rabies death in 40 years, and an investigation revealed a series of mistakes and omissions in treating him. (COURTESY ELAINE TAYLOR)

Spc. Kevin Shumaker holds a puppy on Combat Outpost Base Chamkani, Afghanistan. Shumaker, 24, died of rabies in August 2011, seven months after being bitten by a dog while breaking up a dog fight on the base. His death was the first confirmed military rabies death in 40 years, and an investigation revealed a series of mistakes and omissions in treating him. (COURTESY ELAINE TAYLOR) 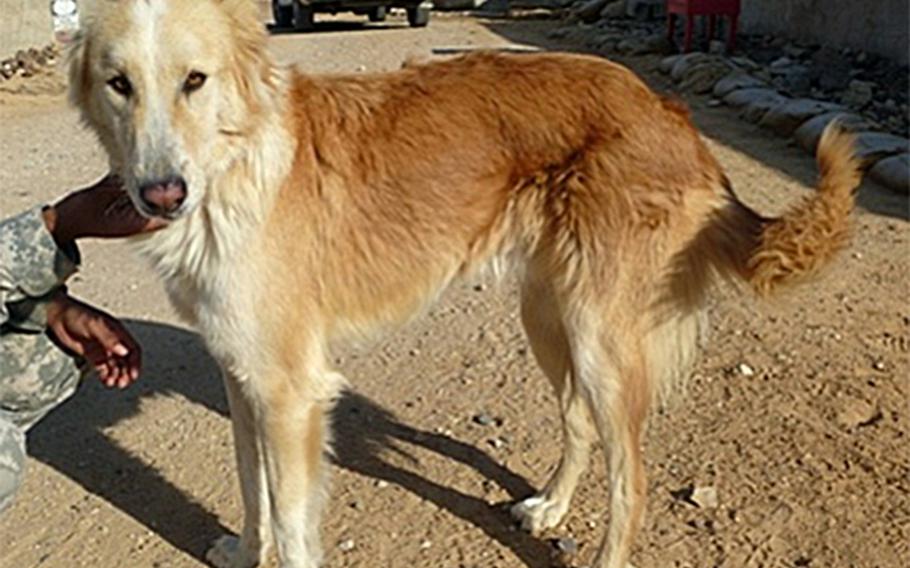 Bernie, one of 14 ''mascot'' dogs vaccinated against rabies on bases in the Sinai Peninsula to which Germany-based troops deployed in 2016, pictured here, was approved for soldiers to play with. But a study found that many other dogs on the bases had not been vaccinated and posed a risk. (Courtesy U.S. Army Medical Department Activity-Bavaria )

Reports of possible exposures to rabies, the deadly virus that killed a soldier seven years ago, more than doubled in southern Germany-based troops in 2016 primarily because of deployments to Egypt and Eastern Europe, according to a new report.

The study published this month in the military Medical Surveillance Monthly Report found 108 possible exposures to rabies in troops assigned to Bavarian garrisons, up from 51 the year before.

None of the people in the study became ill and whether any animals involved were actually rabid was unknown in many cases. In other cases, the animals were proven rabies-free.

But for 63 people, the risk of infection with the virus — invariably fatal once symptoms emerge — was considered to be sufficient for treatment.

“Because it’s preventable and it’s such a terrible disease, we treat if we don’t know,” said Maj. Luke Mease, a doctor of preventive medicine at the U.S. Army Medical Department Activity-Bavaria and the report’s lead author.

Rabies is transmitted through the exchange of blood or saliva from an infected mammal, including cats, dogs, bats and humans. It attacks the nervous system and brain, ending in paralysis, convulsions and a painful death.

It kills more than 50,000 people a year, mostly in Asia and Africa.

Mease and veterinarians initiated the study after noticing increasing reports of animal bites filed in 2016 on a standard Army form.

In addition to the 50 or so annual reports of dog bites from German or U.S. pets collected since 2011, which carry little risk, there were 37 reports from units that had deployed to the U.S. element of the United Nations peacekeeping force in the Sinai Peninsula, along with a dozen more from Eastern Europe.

The reports concerned Mease. It was a Grafenwoehr-based soldier whose 2011 rabies death — the first confirmed in the military in 40 years — revealed a series of tragic mistakes and omissions.

Spc. Kevin Shumaker, a cook with the 615th Military Police Company, had mentioned the bite to a veterinarian in Afghanistan three months after he was bitten. He had reported it on his post-deployment form. But no one followed up, an Army investigation found. It also found inconsistent or incorrect protocols on how and when to treat possible rabies exposure and faulty medical reporting and recordkeeping.

Shumaker died in a hospital in a Syracuse, N.Y., in August 2011, two weeks after his first symptoms appeared while he was on the plane from Germany to his new assignment at Ft. Drum, N.Y.

“It really shook a lot of us in the preventive medicine community,” said Mease, who arrived at the MEDDAC in 2015. “Systems were put in place to prevent that sort of thing from happening again.”

But the new study also found lapses. Some troops who should have received the preventive treatment did not.

On the Egypt bases, approved and vaccinated “mascot” dogs were mixed on base with a larger population of unvaccinated dogs that people assumed were vaccinated.

“Only through retrospective discussion with veterinary staff in Egypt was it discovered that most animals on base were unprotected from rabies,” the report said.

Veterinarians got photos of the 14 Egyptian mascot dogs and used them in a sort of photo line-up asking formerly Egypt-deployed troops who’d been bitten whether any of those dogs had been the perpetrators. If so, there was little or no risk of rabies.

But if a dog with an unknown vaccination status was involved, or a fox or a bat, prophylaxis and follow-up efforts were initiated.

Exposures from foxes in forested German training areas also increased in 2016 over previous years, the study found. Germany is considered rabies-free for terrestrial mammals after decades of orally vaccinating foxes.

But the exposures were deemed appropriate for treatment “because of close proximity of the training areas to the border of the Czech Republic where rabies is present in bats,” according to the report.

Treatment involves a dose of human rabies immune globulin followed by several injections of vaccine spaced weeks apart. It is always effective in preventing the disease, experts say, if administered before symptoms appear, usually between two weeks and three months after exposure.

But shorter, more frequent deployments to a broad range of places makes the potential for rabies exposure more variable and difficult to predict, Mease said.

“As years pass since the last rabies case and as the nature of deployments changes, the U.S. military faces the risk of again underappreciating the threat from this highly lethal virus,” Mease said.