Rabbits near Aviano runway rounded up by volunteers, Italians 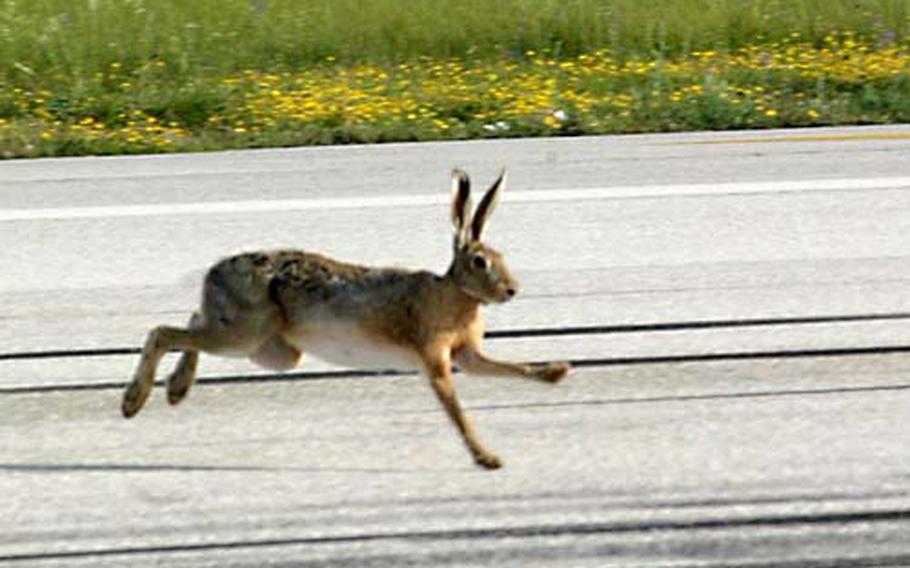 A rabbit breaks free from its cover and dashes across the Aviano Air Base runway in an attempt to elude volunteers who were trying to drive the furry creatures into a series of nets. (Kent Harris / S&S)

A rabbit breaks free from its cover and dashes across the Aviano Air Base runway in an attempt to elude volunteers who were trying to drive the furry creatures into a series of nets. (Kent Harris / S&S) 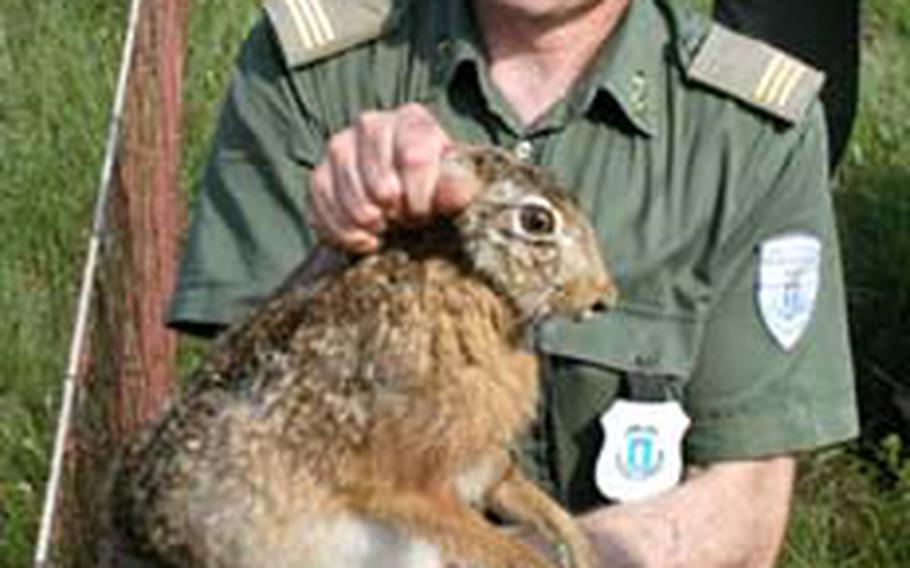 Dario Cester, an Italian park ranger, shows a few American volunteers one of the rabbits they helped capture at Aviano Air Base. The Italian forestali will find new homes for the rabbits in the area. (Kent Harris / S&S) 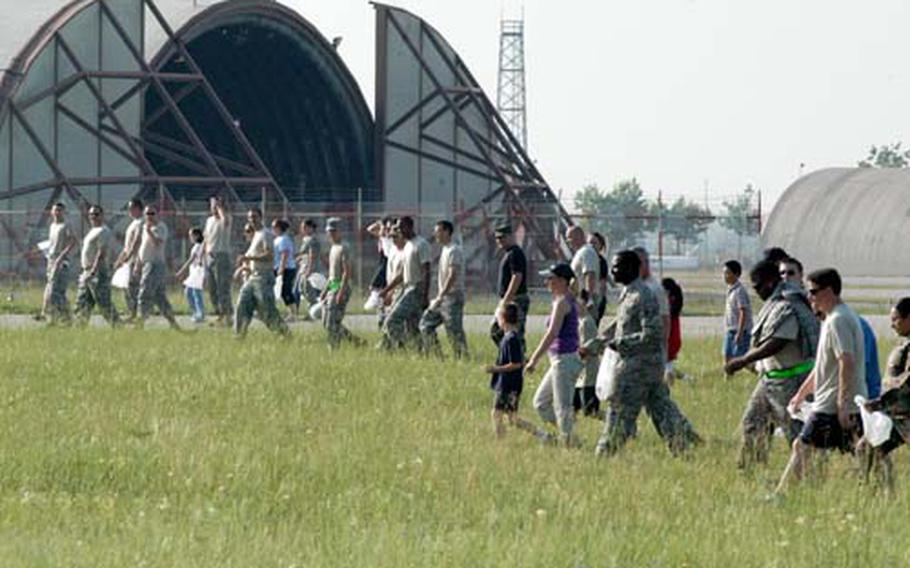 More than 100 people volunteered to participate in a rabbit roundup at Aviano Air Base last Tuesday. The line of people forced rabbits to break from their cover and about a dozen were captured as they ran into nets strung up by Italian rangers. (Kent Harris / S&S) 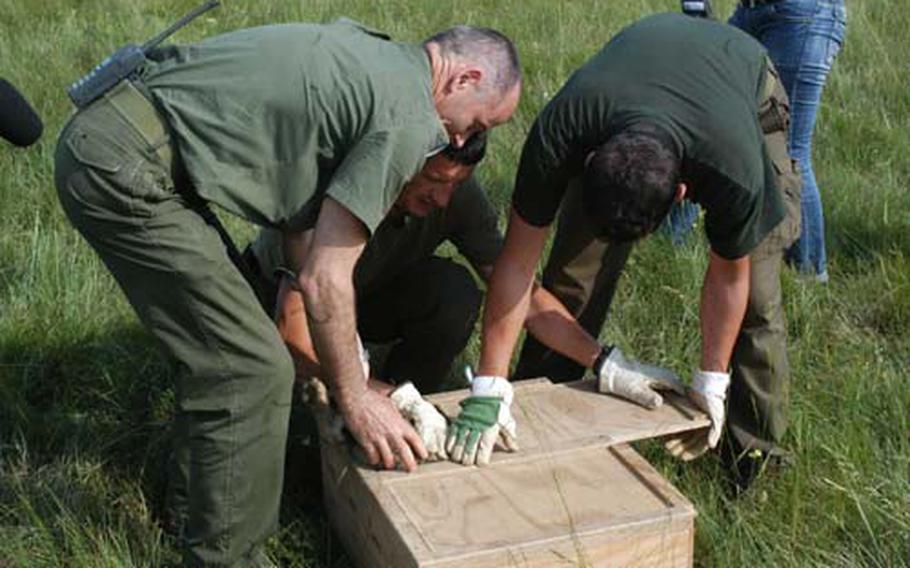 Italian park rangers place a rabbit into a wooden holding box near the end of the rabbit roundup. (Kent Harris / S&S) 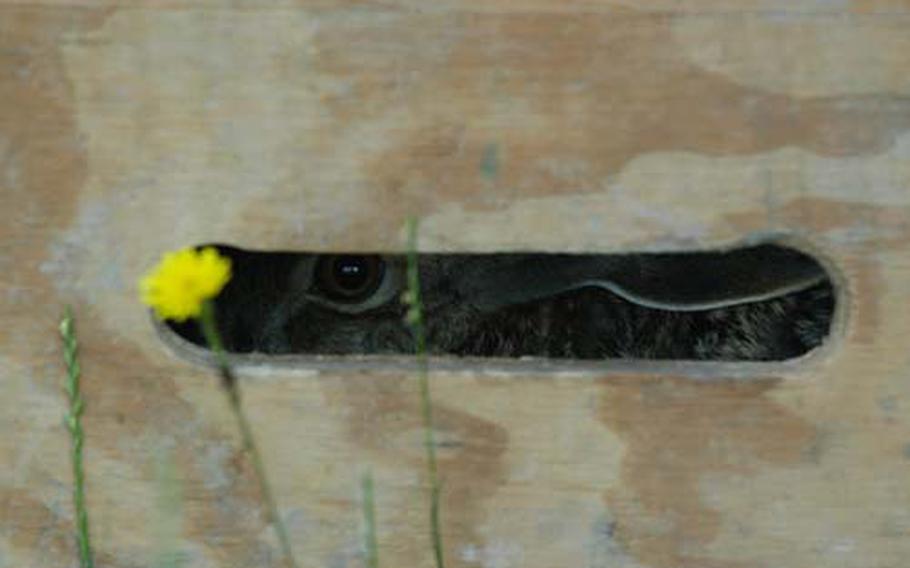 A rabbit captured during Aviano Air Base’s roundup last Tuesday peers out of its wooden cage. About a dozen rabbits were captured on base and will be released in suitable areas in the surrounding countryside. (Kent Harris / S&S)

How many Americans and Italians does it take to capture a rabbit?

The math turned out to be about a 10-to-1 human-to-rabbit ratio last week as the base held its annual roundup.

The little furry guys can move.

More than 100 volunteers showed up to help Italian park rangers capture as many rabbits as they could. Volunteers formed a line across the south end of the runway and started walking north &#8212; not trying to be sneaky.

"Make some noise," Maj. Jeff Montgomery said through the megaphone he was carrying. The more noise, the more likely the rabbits would bolt from their cover and eventually wind up in nets.

In some ways, rabbits are safer on the base, because they&#8217;re not hunted. But there are the occasional times when a rabbit and jet plane meet on the runway. And the rabbit never wins.

So Montgomery, chief of flight safety on the base, said that rounding up the animals is the most humane answer.

Some of the rabbits were obviously veterans of past roundups, though. They knew to look for the gaps in the line or sprint toward the edges of the field where the volunteers were spread out. A few brazen ones went right at the line of volunteers and slipped on past.

Still, about a dozen rabbits were rounded up. The Italian park rangers, or forestali, carefully removed them from the specially designed nets and placed them into wooden boxes for holding. They were scheduled to release them in suitable areas outside the base.

Last Tuesday didn&#8217;t present ideal conditions for the humans or the rabbits. It was about 90 degrees Fahrenheit by the time the roundup was over. The high temperatures apparently had many rabbits hiding in cooler spots off the runway. And the humans were quickly sweating despite what would have otherwise been a leisurely walk.

The event was originally scheduled in April this year but was rained out.