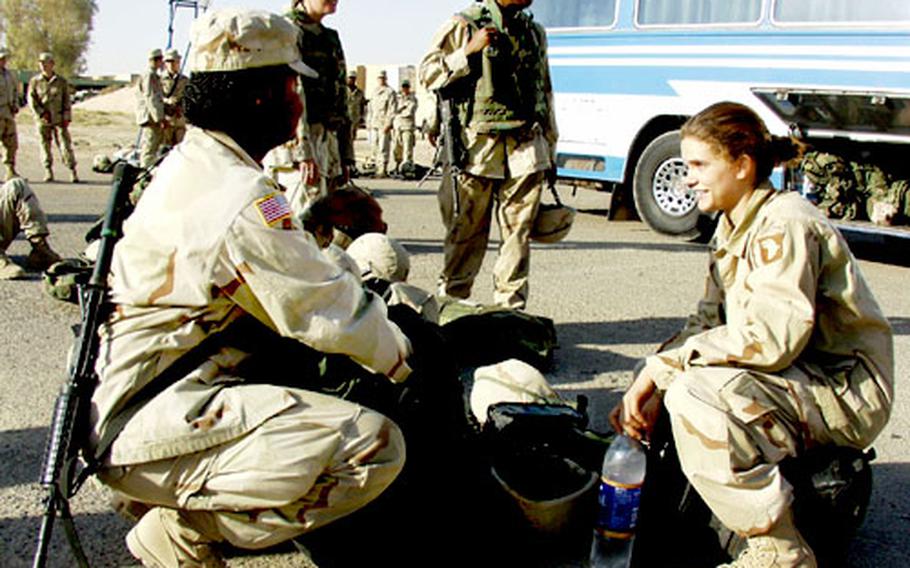 At Qayyarah West Airfield in Iraq, Spc. Jessica Middleton, from Charleston, N.C., left, and Pfc. Cristal Schorn, from Schaumberg, Ill., both with the 1st Brigade of the 101st Airborne Division, prepare Monday to board the bus for northern Iraq. (Lisa Burgess / S&S)

At Qayyarah West Airfield in Iraq, Spc. Jessica Middleton, from Charleston, N.C., left, and Pfc. Cristal Schorn, from Schaumberg, Ill., both with the 1st Brigade of the 101st Airborne Division, prepare Monday to board the bus for northern Iraq. (Lisa Burgess / S&S) 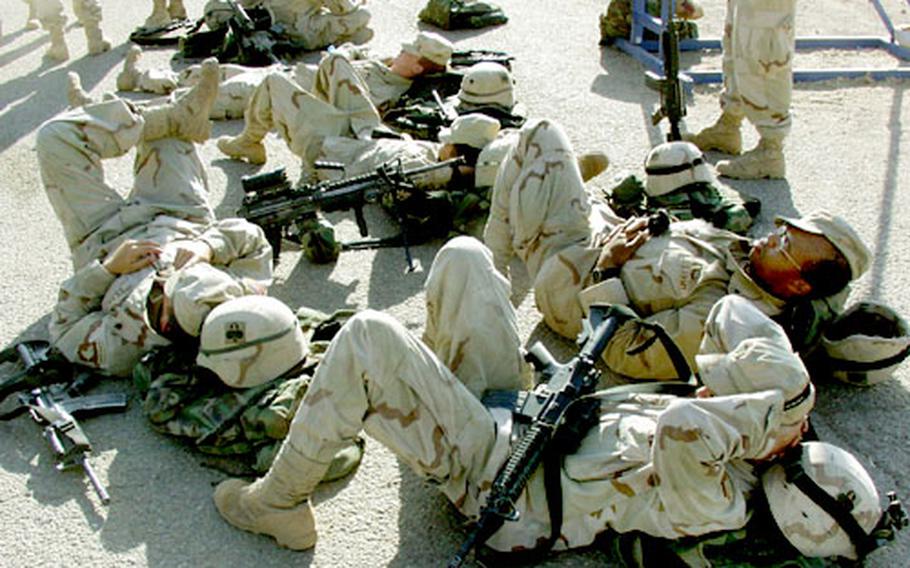 Soldiers with the 1st Brigade of the 101st Airborne Division prepare to board the Big Blue Bus to Freedom Monday at Qayyaray West Airfield in Iraq. (Lisa Burgess / S&S) 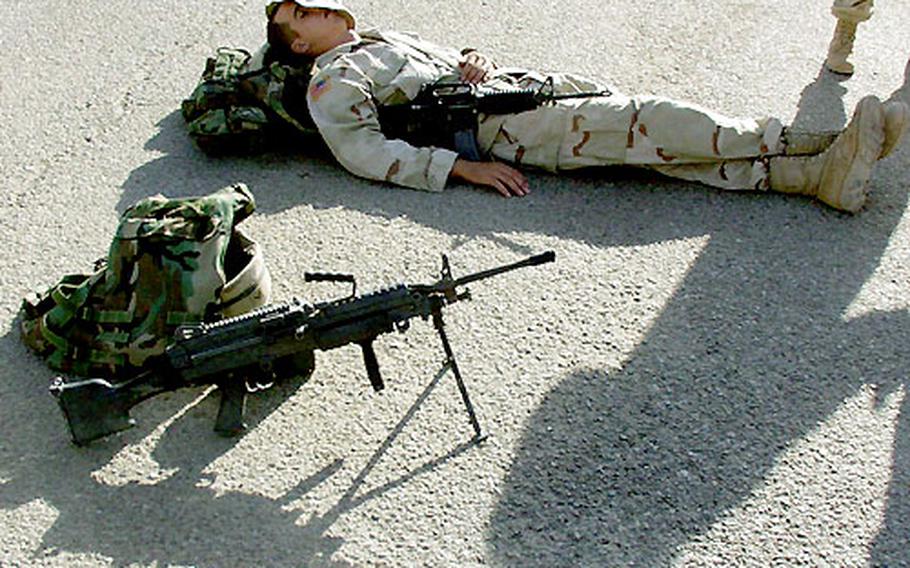 A soldier with the 1st Brigade of the 101st Airborne Division gets a head start on the rest part of his R&R trip while waiting to board the bus. (Lisa Burgess / S&S)

BAGHDAD, Iraq &#8212; To bystanders, the blue- and-white bus that pulled into the dusty headquarters of the &#8220;Bastogne Bulldogs&#8221; early Monday morning looked like any other old bus.

But to the small crowd of 101st Airborne (Air Assault) soldiers gathered at Qayyarah West Airfield, a former military air base about 30 miles south of Mosul, it was far from any old bus.

Schorn, who has been in Iraq since her unit arrived May 4, is one of three cooks for 317 people.

That means of everything Schorn is looking forward to on her R&R, &#8220;having two and a half days with no work and eating different foods&#8221; are her anticipated highlights.

Asked what she hopes to eat, Schorn rolled her eyes.

Schorn is one of the lucky few soldiers beginning to reap the benefits of a new effort by U.S. military commanders to send soldiers on rest-and-relaxation trips.

Division leaders can develop their own R&R plans, including deciding where to send troops, how many and how often. U.S. Central Command also has a program in Qatar.

The programs in Iraq are largely in their infancy.

At the 2nd Brigade of the 3rd Infantry Division in Fallujah, for example, 150 soldiers out of about 4,500 had gone on R&R in Qatar since coming to Iraq, brigade spokesman Capt. James Brownlee said last week.

The division&#8217;s plan, which began in early July, is a cornerstone of a quality-of-life initiative developed by division commander Maj. Gen. David Petraeus, said Col. Ben Hodges, commander of the 101st&#8217;s 1st Brigade, known as the &#8220;Bastogne Brigade.&#8221;

At the 101st, about 70 soldiers at a time pay either $6 to stay at an apartment or $70 for a five-star hotel, which covers two half-days, one full day and two nights in Dahuk, a city in northern Iraq.

Although Dahuk &#8220;is a millions times safer&#8221; than the 101st&#8217;s area of responsibility in Iraq, the division has instituted security measures, including limiting the places soldiers can wander, keeping them in groups, and using local Kurdish troops to assist with force protection, Hodges said.

&#8220;We know people are aware there are U.S. troops there, and we take appropriate measures to ensure their safety,&#8221; Hodges said.

Like many of his fellow unit members, Hill has not had a day off since arriving in Iraq.

Beyond that, though, Hill&#8217;s company has been working in 120-degree heat at what has to be one on the list of the most misery-inducing jobs out here: struggling to put out a major sulfur fire at a plant outside of Mosul.

The fire stays with him, even when he returns to his Spartan, un-air-conditioned quarters.

As a member of one of the 1st Brigade&#8217;s companies assigned to the city of Mosul, gunner Pfc. Joseph Frederick said the trip &#8220;really recharges you. It made me a lot more motivated to do the mission.&#8221;

Later, Frederick went swimming, played tennis with a Kurdish security guard, &#8220;which was pretty cool,&#8221; played pool and ate heartily from the buffets set out each day for the troops.

As Frederick recounted his trip, a crowd of soldiers quickly materialized, listening with expressions ranging from wistful to hungry at the descriptions of clean, soft sheets, French fries and hot showers.

Although Oliver and Hunt are luckier than some of their fellow soldiers &#8212; delicate test equipment requires that their working quarters be air-conditioned &#8212; both men said they have been working seven days a week without a break.

Oliver, from Dover, Del., said he was eager to go shopping for movies and CDs.