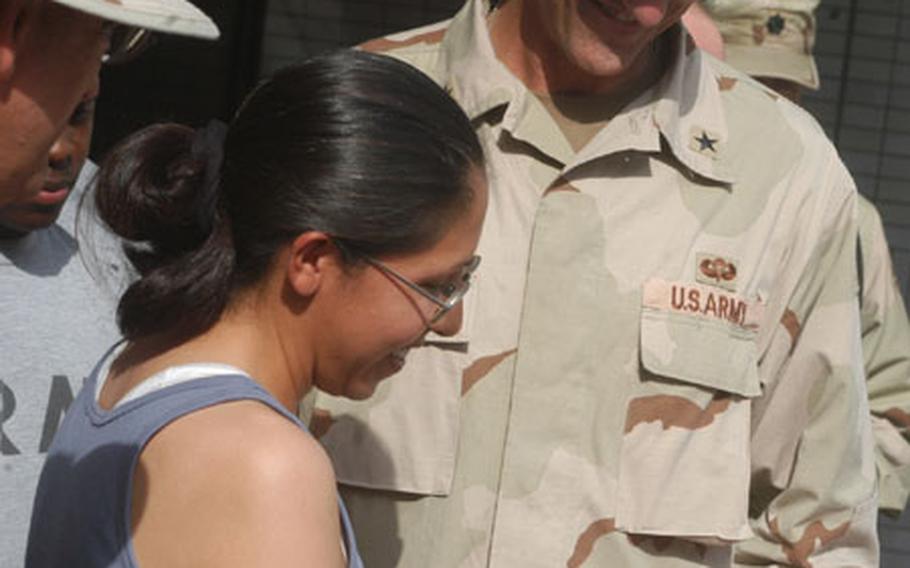 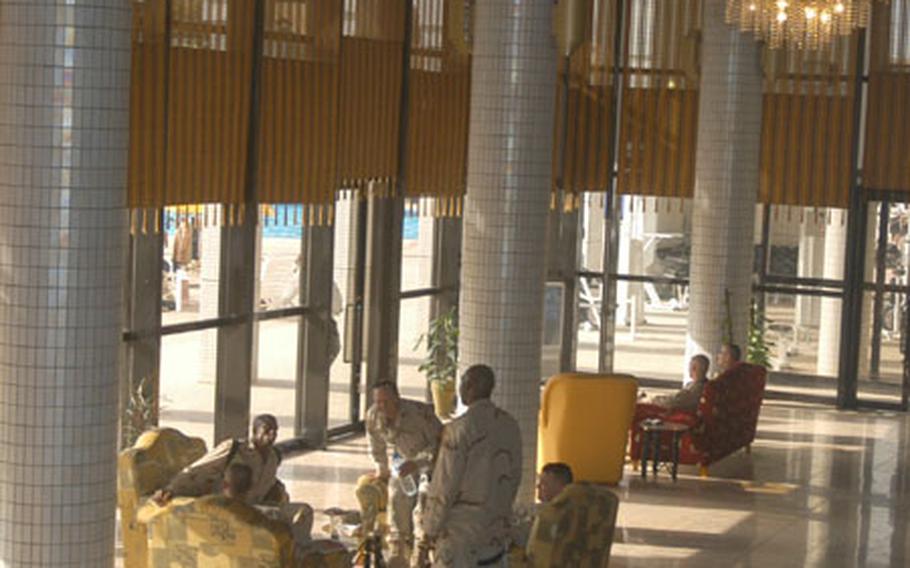 Troops relax Saturday beneath chandeliers and on comfortable chairs at Freedom Rest. The former officers club for the Republican Guard will allow 1,000 soldiers each month to get three days and two nights of relaxation. (Ron Jensen / S&S)

BAGHDAD, Iraq &#8212; If Saddam Hussein could have seen the goings-on Saturday at one of his Republican Guard officers clubs, he&#8217;d roll over in his grave.

Or cave. Or wherever.

U.S. soldiers jumped from the 10-meter diving platform, landing in the clear water of the pool. They stood in line for hamburgers and hot dogs. They listened to the 1st AD Rock Band play hard-driving rock &#8217;n&#8217; roll.

Some just sat in shorts and T-shirts, big smiles on their faces.

It would have brought tears to the old dictator&#8217;s eyes.

The 1st Armored Division Task Force opened Freedom Rest, a rest and recuperation facility in the heart of Baghdad and within the walls of one of Saddam&#8217;s former palaces.

The division expects to allow more than 1,000 soldiers a month to take three days and two nights at the center, which boasts a small post exchange, pool tables, a weight room, large-screen TVs showing AFN programming and an outdoor movie theater.

Brig. Gen. Mark Hertling, assistant division commander for support, said during remarks at the ribbon-cutting ceremony that he had doubts about the facility becoming a reality 45 days earlier.

He credited the vision of the division&#8217;s commander, Brig. Gen. Martin Dempsey, and the hard work of the 203rd Engineer Battalion, a National Guard unit from Missouri. In fact, he pinned the Army Commendation Medal on the uniforms of a few of the engineers, a reward for the effort.

After the brief ceremony, Lt. Col. Dennis Slagter, the division&#8217;s personnel officer, said the division will get only about 35 percent of its 30,000 soldiers in Iraq through the current R&R program for visits back to their homes. So this facility provides another option to give troops a break.

Slagter said the facility will soon be able to hold 150 soldiers. Units, including National Guard and Army Reserve, will be given places in Freedom Rest based on their size within the task force.

For the engineers who did much of the work, the day was satisfying.

The place had not been maintained well. Plus, it had appeared on the U.S. Air Force&#8217;s target list during Operation Iraqi Freedom.

The engineers had no schematic diagrams of the facility, so plumbers and electricians were working blind, he said. Getting parts was also a problem.

Sgt. 1st Class John Ites, also of Company C, said the pressure was on the battalion to get the facility up and running as soon as possible. A couple dozen soldiers and more than 100 Iraqi workers hired by a local contractor worked every day for weeks so Saturday&#8217;s ceremony and its accompanying cacophony could take place.

One of those people was Pfc. John Davis, of Company B, 127th Aviation Support Battalion. He said one benefit is that staying at Freedom Rest doesn&#8217;t put a soldier at the end of the list for the other R&R program, the journey home.

The division&#8217;s hope is that for a couple of days at least, the weary soldiers can put their jobs behind them, forgetting the monotony of the guard post or the challenge of driving through dangerous areas.

As far as Davis, a mechanic, was concerned, that mission was accomplished on the trip from his base to the center.