R&R crew's chaplain tends to warriors bogged down with stress 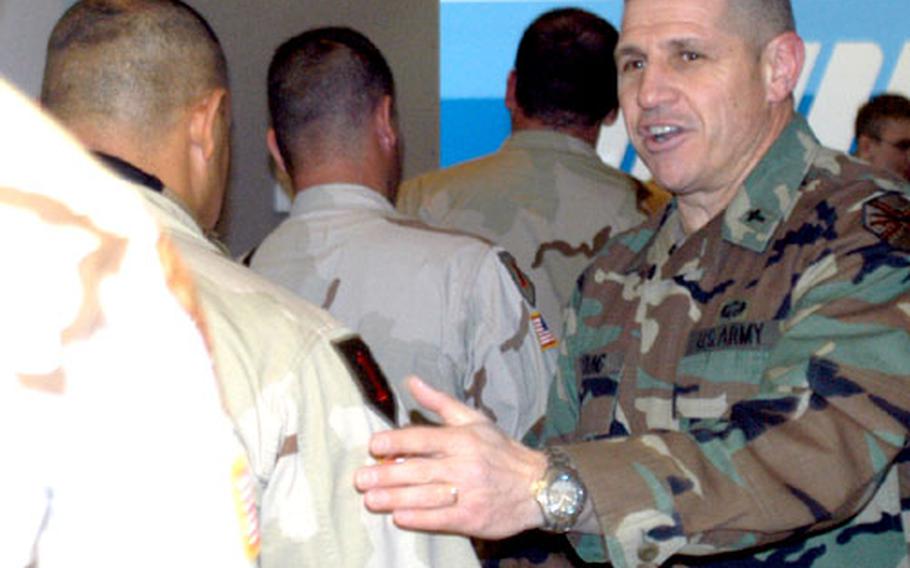 Army Chaplain (Maj.) Sid Young, who is with the Nevada National Guard and deployed to Rhein-Main Air Base, Germany, greets troops coming back from a rest and recouperation trip to the States. Before he stopped counting in November, Young had greeted more than 250,000 troops and civilians at the base. Young is looking into getting a permanent position within the U.S. Army Europe so he can do what he loves. (Jessica Inigo / S&S)

RHEIN-MAIN AIR BASE, Germany &#8212; Sometimes all a combat-jaded troop needs is a warm smile and a hearty handshake to feel human again.

Army Chaplain (Maj.) Sid Young, with his welcoming grin and perceptive gaze, makes it his job to tend to war fighters who are bogged down with emotional stress.

Young acts as the heart and soul of transient troops going through Rhein-Main Air Base, catching the emotion in their eyes and lending an ear when it counts.

He hears every affliction, from pain left after the death of a battle buddy to difficulties of family separation, but sometimes it&#8217;s what he doesn&#8217;t say that makes the biggest impression on traveling troops.

&#8220;He&#8217;s just what troops need to get back in the swing of things &#8212; get that mind-set. I think he provides confidence in people and motivates them just by being there. He&#8217;s the best chaplain I&#8217;ve seen. He amazed me,&#8221; said Sgt. Paul Stokes, a military policeman with Company G, 759th MP Battalion, who was traveling back Wednesday morning from rest and recuperation leave to Camp Provider, Iraq.

Stokes and the rest of the MP battalion heading back to the desert first met Young when they came into Rhein-Main to begin their leave.

Young, who has picked up nicknames such as &#8220;Smiley&#8221; and &#8220;Happy Chappy,&#8221; briefed the troops with his team of all-Army R&R specialists, providing counseling, medical, mental health and spiritual services.

The chaplain, who was activated with the Nevada National Guard over two years ago, has spoken to just about every troop or civilian who flew through Rhein-Main for R&R, initial deployment and homecoming flights since he deployed to the air base in May 2003.

Young worked as a psychiatric counselor in his own private practice at home in Utah and as a teacher at the Southern Utah University church education system before being activated. He said he could tell the difference between a troop&#8217;s game face and actual pain. That is when he steps in and takes steps toward making the troops healthy in heart and mind.

The team works almost anytime of the day or night, meeting, greeting, helping and handling troops. The hours vary with flights, but usually the R&R crew counts on working between midnight to 6 a.m. and then again from 9:30 a.m. until sometime in the early afternoon when its mission ends.

Once troops are in the terminal, the R&R crew tries to get as much one-on-one interaction as it can. Sometimes the chaplain is stopped and asked to do a quick prayer, other times the R&R group spots someone in need of guidance, but team members always make themselves available any time of the day or night.

Many times before the flights take off back to the desert, Young climbs aboard and sends the troops off with a final prayer and blessing.

Now, Young is looking forward to being there for troops as they come in over the holidays, though he will be missing his own family Christmas in Utah for the second year in a row.

In fact, this year the whole family &#8212; his wife, Kris, their six children, four grandchildren and the three more on the way &#8212; will be at his home in Cedar City, Utah.

&#8220;I would just have to reiterate how important it is to make sure each and every soldier is taken care of and that I&#8217;m there for them for whatever they might need,&#8221; he said.

Young, who has been asked to extend again as the R&R chaplain, is looking into getting a permanent position within the U.S. Army Europe so he can do what he loves while having his family in Germany with him.

The troops burdened with war worries said they wouldn&#8217;t have it any other way.