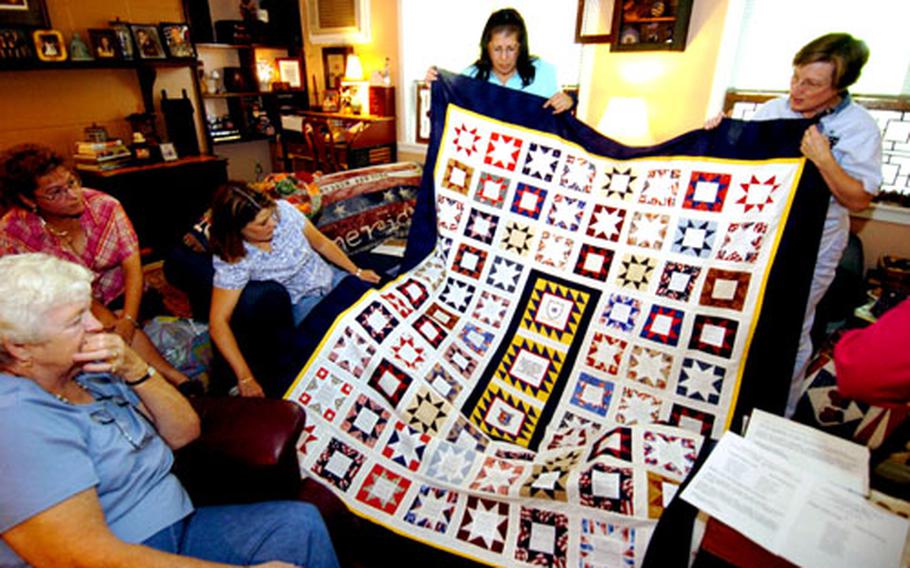 Members of the Yongsan Quilters Guild hold up the finished front of a quilt made in memory of the soldiers from the 2nd Brigade Combat Team who died in Iraq. (Chris Stoltz / S&S)

YONGSAN GARRISON, South Korea &#8212; For the past year, a group of women who like to quilt have been working on a project to remind others, and themselves, that every name matters.

They had to wait a full year until the number of casualties among the 2nd Brigade Combat Team members in Iraq stopped at 68. Now they are piecing together a quilt in honor of those soldiers who once were stationed in South Korea as part of the 2nd Infantry Division.

&#8220;We wanted to do something to remember the soldiers,&#8221; said Kathy Hansen, a member of the Yongsan Quilters Guild.

The idea started with Chong-He Patton, whose husband, Col. Gary Patton, is the commander of the brigade. When he deployed to Iraq at the end of last summer, his wife wanted a project to recognize the sacrifice other families were making, her friends said last week.

The design was simple. Using their own leftover fabric, they put a white square in the center of red, white and blue triangles, making a star.

Piecing it together proved harder.

The quilt squares have been pieced together but the women still need to attach the filling and the backing. Then the group will take it to Dongdaemun, a shopping district in Seoul, to have it quilted.

Later this fall, they plan to send it to Fort Carson, Colo., where the brigade permanently moved after its Iraq deployment ended. They hope it will be displayed in the base&#8217;s museum.

Now the group is focusing on contributing quilts to every soldier wounded in Iraq or Afghanistan. A group called Quilts for Soldiers is asking quilters worldwide to make blankets for each servicemember hurt in operations Iraqi Freedom or Enduring Freedom.

As of Wednesday, more than 15,000 have been wounded. According to the group&#8217;s Web site, www.quiltsforsoldiers.com, more than 2,400 quilts have been given out.