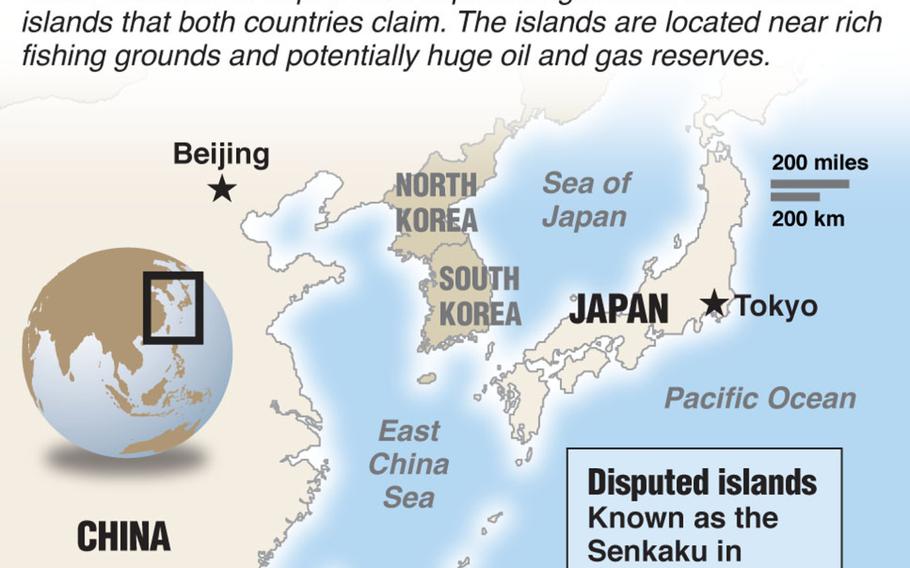 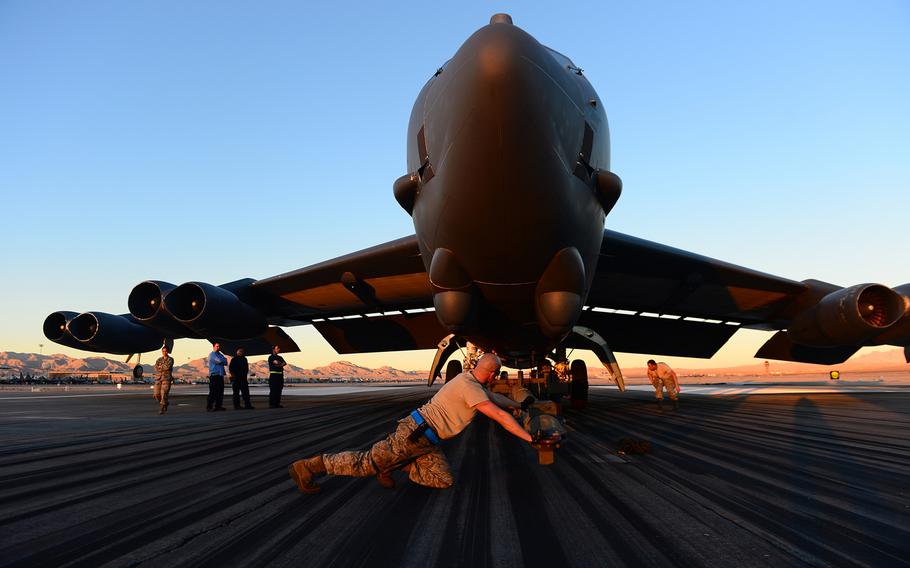 Senior Airman John Myer fixes a tire on a B-52H Stratofortress at Nellis Air Force Base, Nev. in January. On Tuesday, the United States sent two B-52s on a previously planned mission into China's newly created East China Sea Air Defense Identification Zone. The U.S. and Japan have both said they will not recognize the zone, which includes airspace over the Japan-administered Senkaku islands. (Vernon Young Jr./Courtesy of the U.S. Air Force)

YOKOSUKA NAVAL BASE, Japan — An unarmed B-52 bomber mission Tuesday into China’s three-day-old Air Defense Identification Zone may well have been planned far in advance, but there was nothing routine about it.

The two-bomber flight sent a message to China: You will not drive a wedge between close allies Japan and the U.S. over the sovereignty of the Senkaku islands, regional analysts said Wednesday. The dramatic response by the United States served as a deterrent to China’s designs on Japanese-administered Senkaku, claimed by China as the Diaoyutai islands, they said.

China claims the islands — and their resource-rich waters — by right of historical discovery. Senkaku was claimed by Japan in 1895 and restored to its possession by the United States in 1972, along with Okinawa.

“The United States has a long tradition of upholding international law in the seas and air,” said Carlyle Thayer, an American author and professor emeritus at Australia’s University of New South Wales. “It doesn’t allow a creeping change of the status quo in international law by individual countries.”

For now, it appears the United States’ unequivocal rejection of the air defense zone has been strategically successful. It gave Japanese Prime Minister Shinzo Abe cover to talk tough about defense of Senkaku and freedom of the skies in a televised parliamentary session.

“We demand China revoke any measures that could infringe upon the freedom of flight in international airspace,” Abe said Monday.

South Korea, a key U.S. ally, which has been warming to China under its new presidential administration, also chastised Beijing. Australia called in China’s ambassador for an explanation of the move.

It was China’s move Wednesday.

“China has the capability to exercise effective control over the relevant airspace,” the brief statement said.

The statement said nothing about demands for flight plans, active transponders or any of the rules that, if broken, China said Sunday might justify “emergency defensive measures.”

From the Chinese point of view, the United States is being hypocritical. The U.S. set up its own air defense identification zone in 1950, following the outbreak of the Korean War.

The zone stretches for hundreds of miles on the Atlantic and Pacific coasts, as well as along the Canadian and Alaskan borders, and along the Gulf of Mexico coast.

However, there are two key differences. First, China wants to apply its zone to any non-commercial traffic in a wide swath of the East China Sea, no matter where the planes are headed.

The United States “does not apply its ADIZ procedures to foreign aircraft not intending to enter U.S. national airspace,” Secretary of State John Kerry said in a statement Saturday.

Second, the U.S. zone doesn’t include land claimed or administered by another country, as the new Chinese zone does with Senkaku.

Chinese officials told reporters earlier this week that the air defense zone isn’t aimed at one particular country, but most analysts see it squarely aimed at Japan and its ownership of Senkaku.

Both Japan and China call the uninhabited islands an “inherent part” of their countries, though their interests lie less in the vegetation-covered rocks than in the projected energy reserves surrounding their nearshore waters.

“I just see this as the latest attempt to get Japan back into talks … to gain an admission that there is a dispute,” Thayer said.

China hopes it can use Senkaku to create a wedge between the U.S. and Japan, said Thayer — the thinking being that the U.S. will back down to avoid a war over a pile of rocks.

Instead, China’s actions are probably strengthening the U.S.-Japan alliance and may ultimately support the U.S. rebalance strategy toward Asia, according to the Center for Strategic and International Studies, a bipartisan think tank.

“Support for Japanese views may grow in Southeast Asia as states bordering the South China Sea worry about a similar Chinese move to place a South China Sea ADIZ over their disputed islands,” CSIS stated in a report released Tuesday.

A Chinese air defense zone in the South China Sea would be extremely difficult to enforce, Thayer said, because there are so many multinational military exercises there. But it is not out of the realm of possibility.

China claims most of the islands and reefs in the South China Sea, some of which it guards with coast guard cutters. Six other nations also claim some of those territories.

Several of those countries’ leaders would love to make demands of China the way Japanese Prime Minister Abe did, but wouldn’t risk it.

“Japan can sort of make those comments because they have the military capability to do so, and they have assurance of the United States coming to their aid in case those incidents happen,” said Lauro Baja, the Philippines’ former ambassador to the United Nations.

At the same time, Southeast Asia is growing more dependent on China’s economic might. The U.S. is also keen to maintain economic relations with Beijing, and well aware of its fear of the United States “encircling China” with bases and troop rotations in allied nations.

In its 2013 Defense White Paper, China noted that it has entered a “period of strategic opportunity,” but that the U.S. rebalance toward Asia is the source of “unprecedented stress” on that opportunity.

“Against that backdrop, [Chinese Premier Xi Jinping’s] frequent admonitions to the People’s Liberation Army to be prepared to ‘fight and win wars’ take on added significance,” the CSIS report noted.