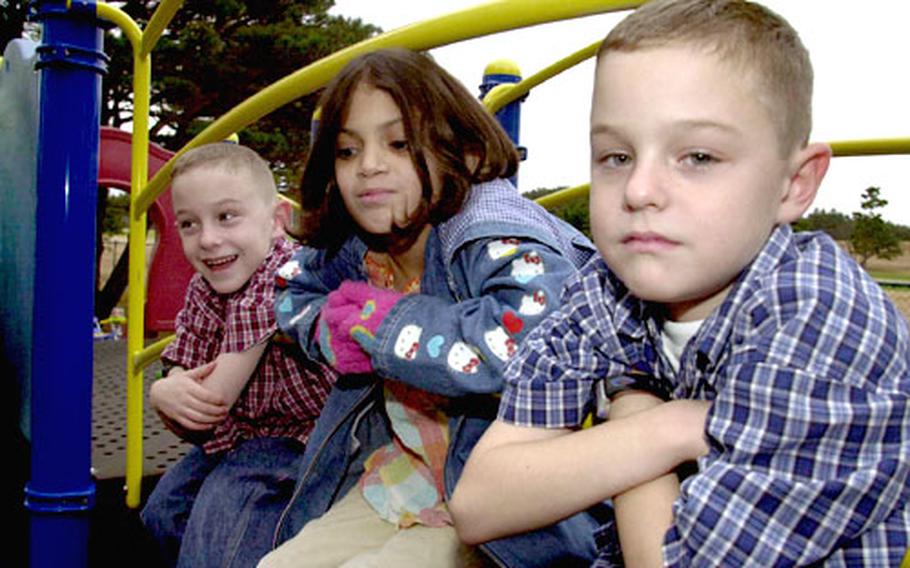 MISAWA AIR BASE, Japan &#8212; Air Force Capt. Maurice Cullen would rather not think about what almost happened.

His 8-year-old daughter, Nicky, was dangling from her bicycle helmet, which was wedged in some playground equipment at Starfire Court playground.

Not able to free herself and unable to breathe, her life was in the hands of 7-year-old twins, Matthew and Mark Jordan, who were playing nearby.

Mark initially thought Nicky was playing. But she wasn&#8217;t moving, and when he approached, he saw she was drooling.

The back of Nicky&#8217;s helmet was stuck between the rails of a bridge connecting two pieces of playground equipment. The helmet strap was cutting off her air; her feet were dangling.

Matthew climbed atop the bridge to dislodge the helmet.

Back at the Jordan house &#8212; down the street from the playground &#8212; Mark summoned his mother, Jodi Jordan.

Nicky was lying motionless on the ground, her breathing labored, Jodi said, adding she thought the girl had a seizure.

Other children had also run home to tell their parents.

When another adult arrived, Jodi went home to call 911 and returned with blankets to keep Nicky warm.

In the meantime, Maj. Kevin Stephens, an emergency room doctor who lives in the neighborhood, arrived and administered care to Nicky before an ambulance arrived.

Of her boys, she said:

Nicky spent the night in the base hospital, but has since made a full recovery. The twins have forged a unique friendship with their neighbor.