Quick reflexes will be needed to snap up Wii, PS3 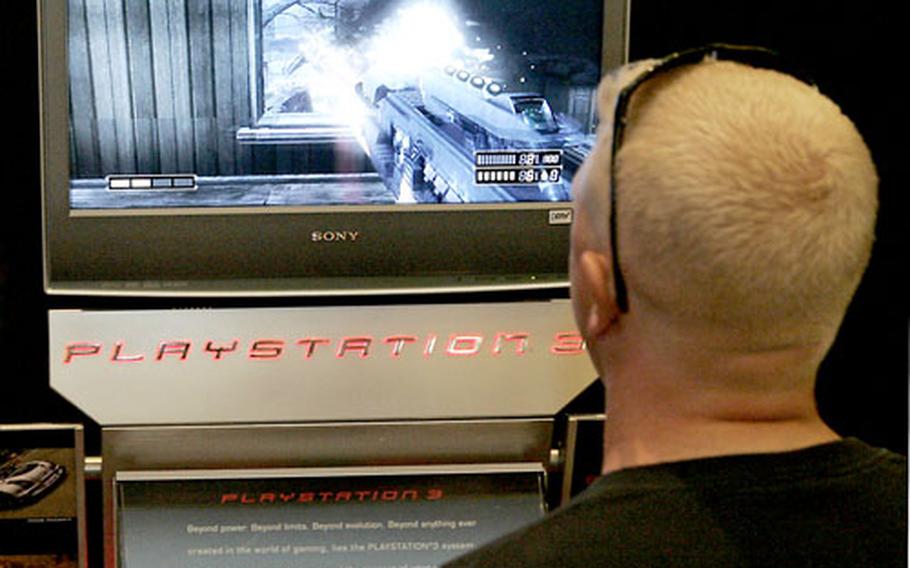 Joseph Lee, a Marine stationed at Kaneohe Marine Base, Hawaii, plays a video game on Sony’s new, yet unreleased, Playstation 3 at the Sony Expo held at the Ala Moana Hotel on Friday in Honolulu. (Marco Garcia / AP)

The good news is that games for two new video game consoles coming out later this month are available online for preorder. The bad news is that the consoles themselves aren&#8217;t.

Both the Nintendo Wii and Sony Playstation 3 will launch in less than two weeks&#8217; time, and supplies of both are anemic. Army and Air Force Exchange Service PowerZone stores in Europe can expect to see anywhere from six to 36 of the $249 Wii consoles appear and disappear from their shelves, sometime soon after the U.S. release date of Nov. 19.

&#8220;I think there was supposed to be 2,664 worldwide for AAFES,&#8221; said Teresa Gaskins, a retail program specialist for AAFES Europe. She added that she didn&#8217;t know if the Wii consoles would arrive in Europe by the console&#8217;s U.S. launch date because they could be slowed by customs.

Those eager to get their hands on one of the coveted consoles had better be ready to zip to a PowerZone at a moment&#8217;s notice when they do arrive. PowerZone stores contacted by Stars and Stripes indicated they didn&#8217;t intend to allow customers to sign up on waiting lists to purchase the consoles before Christmas.

A Naval Exchange official is still expecting the game consoles to arrive soon.

&#8220;As in the past, the rollout of new launches overseas has mirrored those in the continental United States within a day or so,&#8221; said Kristine M. Sturkie, a NEX command spokeswoman. &#8220;Delivery of merchandise overseas takes a bit longer due to transit times and unexpected delays.&#8221;

But, an employee at the Navy Exchange in Naples, Italy, said there has been no word yet on when the new machines might be arriving. However, for popular electronic merchandise, the Naples exchange typically sets up a customer logbook &#8212; sort of first-come-first-served &#8212; where customers are notified when their desired item arrives, the employee said.

While the consoles may be hard to come by, supplies of games for the systems are more robust. Dozens of game titles are available for preorder at AAFES&#8217; online store and at other online retailers for about $60 apiece.

The uncertainty in supplies of the PS3 console, meanwhile, appears to rest with Sony, which is shipping far fewer units than originally anticipated. Sony announced in September that it would ship 400,000 PS3 consoles to North America for its Nov. 17 launch, and 6 million worldwide by the end of March 2007. Some analysts in Japan have said as few as 4.13 million PS3s will ship by the end of March.

But Senior Airman Nick Jensen of RAF Mildenhall&#8217;s 100th Security Forces Squadron said he is a &#8220;dedicated&#8221; Playstation enthusiast who will definitely pick up a PS3.

It might be awhile though, he said, due to the high price.

Stars and Stripes reporters Geoff Ziezulewicz in Lakenheath, England, and Sandra Jontz in Naples, Italy, contributed to this story.