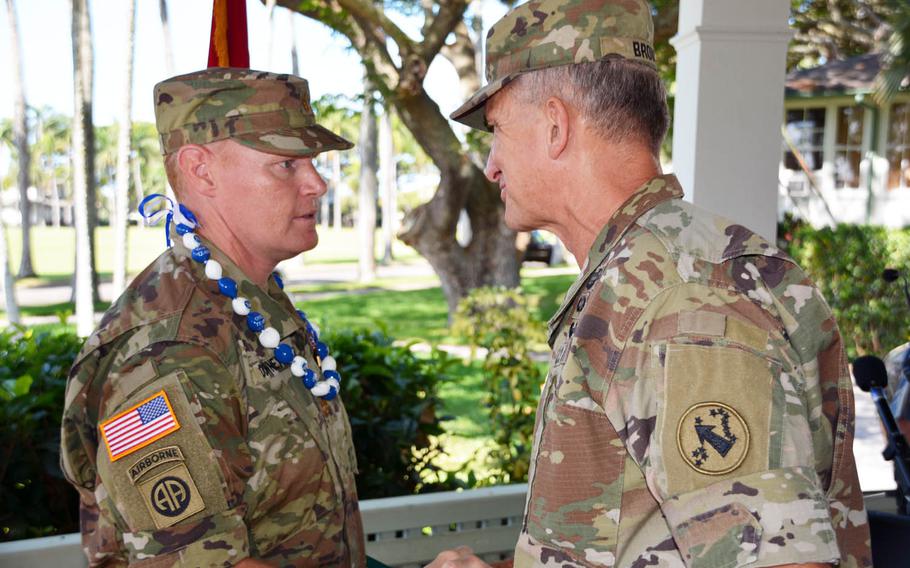 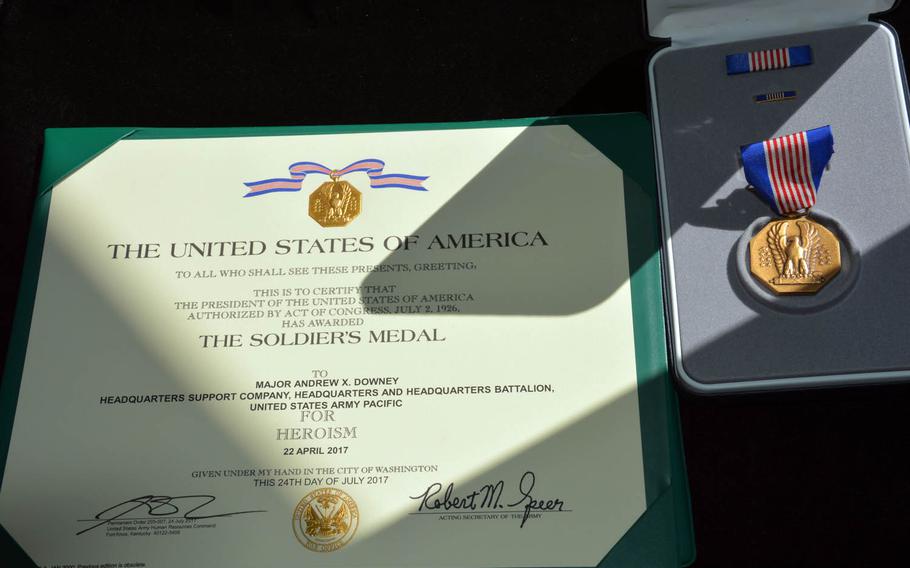 Buy Photo
The Soldier's Medal and citation awarded to Maj. Andrew Downey at Tuesday, Aug. 29, 2017, at Fort Shafter, Hawaii, for rescuing a family of three from drowning off the shore of Kauai in April. (Wyatt Olson/Stars and Stripes)

FORT SHAFTER, Hawaii — Maj. Andrew Downey at first saw only a woman’s hand jutting out of the surging whitewater tide on a stormy day last April off the north shore of Kauai. As she bobbed up, he saw the backpack that was dragging her under.

Within a few minutes he had pulled the woman, her husband and their 11-month-old child out of the swirling maelstrom called the Queen’s Bath.

On Tuesday, Downey was presented the Soldier’s Medal, the service’s highest honor for an act of valor in a non-combat situation.

“What a great day when you can recognize a soldier for doing a heroic act,” said Gen. Robert Brown, commander of U.S. Army Pacific, as he presented the medal at a short ceremony at Fort Shafter. “It’s a pretty darn good day.”

Addressing the group of soldiers who had gathered, Downey said, “I have to say that I think a lot of people would do the same thing, and first responders do it every day without any thought of their own personal safety. I’m happy everyone came away unscathed.”

Such rescue attempts are indeed perilous. In July 2015, two soldiers with Hawaii’s 25th Infantry Division were standing on rocks along the shore of Halona Beach Cove on Oahu. A sudden wave pulled one of them in, and as the other soldier attempted to pull him back up, another wave dragged him out. Both drowned.

Downey, who works in Space Operations, had been vacationing on Kauai with his wife, Rifka, and four children.

They were standing near Queen’s Bath, a tide pool on the Hawaiian island’s north shore. During the winter months, the surf is often dangerously high in this area, even more so during stormy weather.

The more confident swimmers leap off a cliff into Queen’s Bath during calm days. But April 22 was not one of those days.

“That day everything was shut down,” Downey said. “There was a heavy rain storm and bigger waves were coming in. A few waves — heavy waves — rolled in and crashed over the rocks. There was a lot of whitewash coming in.”

It was Rifka who first realized someone standing near that cliff’s edge had been dragged in by a rogue wave.

“I saw the baby in the water first, just being caught up in the whitewash,” Rifka said, standing beside her husband after the medal ceremony. “I started yelling for him to go get them. He saw the woman. I started praying.”

“There’s not much time to think,” Downey said of the seconds the catastrophe unfolded. “It’s more of a reaction to the situation. You have to make a quick assessment of what’s going on. A quick decision makes a difference when somebody’s going under.”

“Without regard to his own safety, Downey immediately jumped 20 feet into the ocean, navigated through the whitewater to the woman, hooked his arm around her, and took her safely to shore,” the award citation reads.

He returned to the father, who was holding onto the baby.

“He did a great job holding onto that child,” Downey said. “He did a phenomenal job staying afloat.” But when the father told Downey he “really couldn’t swim,” the soldier took the baby ashore himself. He then returned for the father, who was by then clinging to a jutting rock.

The names of the rescued family members, who were vacationing from Wisconsin, were not made public.

The Downeys have been stationed in Hawaii for four years, so they have developed a healthy respect for the capricious clout of Hawaiian waves.

“It’s understandable if you’re not from the islands,” Downey said of the naiveté of some tourists. “Sometimes they’re not aware of the power of these waves, and it’s easy to get swept up.”