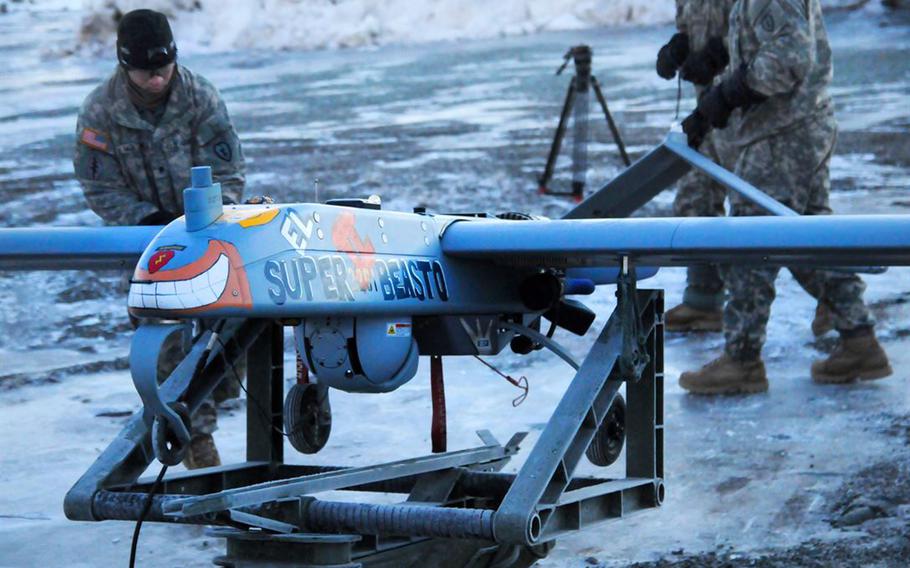 Paratroopers prepare an RQ7 Shadow unmanned aircraft system for launch on Forward Operating Base Sparta on Joint Base Elmendorf-Richardson, Alaska, Jan. 30, 2014. A Shadow RQ-7Bv2 unmanned aircraft went missing for 10 days after it was launched from southern Arizona on Jan. 31. (Department of Defense)

Paratroopers prepare an RQ7 Shadow unmanned aircraft system for launch on Forward Operating Base Sparta on Joint Base Elmendorf-Richardson, Alaska, Jan. 30, 2014. A Shadow RQ-7Bv2 unmanned aircraft went missing for 10 days after it was launched from southern Arizona on Jan. 31. (Department of Defense) 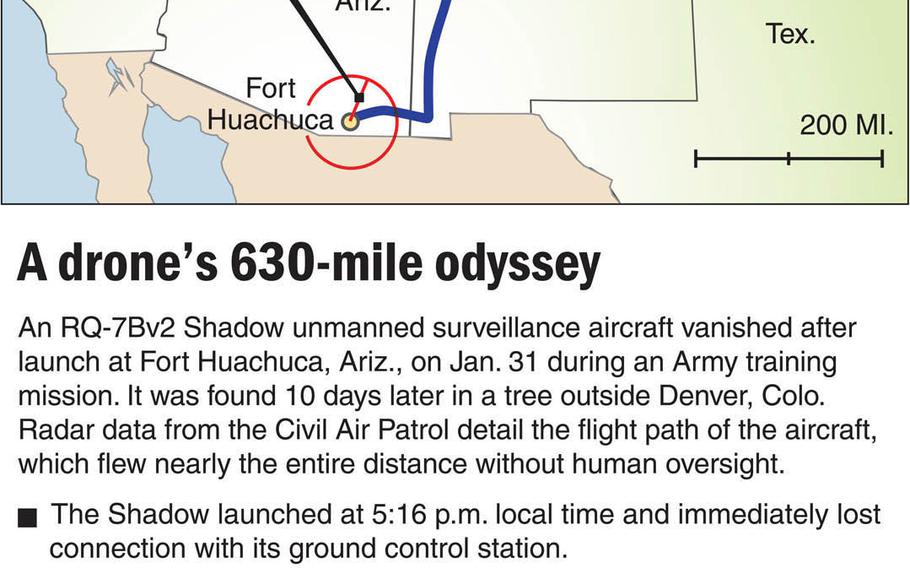 SAN ANTONIO — Mystery shrouds the rogue flight of an Army unmanned surveillance aircraft that was launched from southern Arizona on Jan. 31, flew hundreds of miles independent from human control and was found Feb. 9, broken apart in a tree outside Denver.

The incident has raised questions: Why did the Shadow RQ-7Bv2 unmanned aircraft fly so far outside its 77-mile range, and how did the Army lose its aircraft for 10 days?

The Shadow was part of a training mission conducted at Fort Huachuca in Arizona by soldiers from the 2nd Stryker Brigade of the 7th Infantry Division at Joint Base Lewis-McChord in Washington, according to Lt. Col. Fredrick Williams, a division spokesman.

The aircraft quickly lost its connection with its ground crew after it was slung from its pneumatic catapult, said Tanja Linton, a Fort Huachuca spokeswoman. Linton confirmed Monday that the aircraft essentially flew the entire 630-mile journey outside of the Army’s control.

Army officials have declined for weeks to release specifics about the incident, pending the results of an investigation. The Associated Press reported the aircraft, used to conduct aerial reconnaissance and surveillance for brigade operations, was missing a wing when it was found.

An initial search of the area in Arizona failed to find the aircraft, and the Army concluded it likely disintegrated nearby, Linton said in a news release a week before the aircraft was found.

Soldiers from Fort Carson in Colorado secured the aircraft and will send it back to Joint Base Lewis-McChord by rail, Williams said.

It remains unclear how the flight of the $1.5 million aircraft with a range of about 77 miles reached a point eight times that distance.

The Shadow, a 450-pound aircraft with a 20-foot wingspan, is flown mostly autonomously, with a preset bearing, altitude and wind speed, said Paul Stevenson, an Army aviation spokesman. The settings can be manually adjusted by an operator at a ground control station. The flight operator is paired with a payload operator, who controls the surveillance camera in real time.

The aircraft operates by using a line-of-sight radio communication link with a ground control station within that range, according to specifications from Textron Systems, the Shadow’s manufacturer. Other unmanned drones are capable of remote piloting that uses satellite uplinks from across the world.

Stevenson declined to release the distance endurance of the Shadow, though it is capable of flying for nine hours, he said. The 77-mile range is the limit of the ground control station’s link with the aircraft. It can fly farther than 77 miles in a circular pattern over an objective, for instance.

It is possible the Shadow could reach the 630-mile distance with the fuel it has on-board, said Paul Scharre, a former unmanned system policy official at the Pentagon and director of the Future of Warfare Initiative at the Center for a New American Security, a Washington think tank. The National Weather Service recorded strong winds from the southwest into Colorado on Jan. 31, which also could have aided the Shadow on its long flight.

Most unmanned aircraft systems like the Shadow are programmed to respond in different ways when a link is lost, Scharre said.

Unmanned aircraft can loiter in the sky awaiting a link to reestablish, he said. The Shadow’s software can send the aircraft back to its launch point if the link is severed, but this Shadow not returning raises the possibility that its emergency programming failed.

“It’s reasonable to think it just kept flying on the heading in whichever direction it was pointed last,” Scharre said.

Losing a link is not unusual and it’s accounted for in the design of the aircraft, though the rogue flight and crash highlights broader concerns about unmanned aircraft, he said.

“Without a person on board, even with a good link, you’re not going to have the same level of cognitive awareness,” Scharre said. “And if you lose signal link, you may have a limited ability to re-assert control over the aircraft. This would not happen with a person unless they went crazy or defected. That’s pretty rare.”

If the emergency return programming failed, he said, it also points to the limitations of autonomous technology to adapt to changing conditions.

“When programming is pushed outside its parameters, things can fall apart really fast,” Scharre said.

The aircraft flew east from Fort Huachuca in southern Arizona and banked sharply at 90 degrees after crossing into New Mexico. It flew north over the Gila National Forest and through sparsely populated areas and Native American reservations, according to a radar-tracking map.

The Civil Air Patrol radar system lost the Shadow’s signal near the southern Colorado border as it went into mountains, about five hours and 10 minutes into its flight, said Lt. Col. John Henderson, vice commander of the Civil Air Patrol’s National Radar Analysis Team, which tracks and analyzes aircraft locations in the event of crashes, including this Shadow.

Henderson said it must have maintained at least a 12,000-foot altitude to clear the mountain ranges. The Shadow was about 400 miles into its flight at that point, Henderson said, flying near Navajo City, N.M.

It is 232 miles from Navajo City to Evergreen, a town west of Denver, where the Shadow was found in a tree by a hiker, The Associated Press reported. The estimated flying distance: 632 miles, essentially the entire distance without Army command and control.

Textron Systems, which manufactures the Shadow for the Army, declined several times to discuss capabilities of the aircraft, citing the ongoing investigation.

Morgan Stritzinger, a Textron spokeswoman, also declined to confirm any discussions between the company and the Army about safety and legal considerations of a wayward aircraft shuttling across a vast expanse of the American West before dropping at least 12,000 feet out of the sky near the country’s 19th most populated city.

Other mishaps involving Shadows have occurred in recent years. In 2014, a Shadow aircraft crashed in Pennsylvania and was struck by a car. In 2011, a C-130 cargo plane collided with a Shadow in the air over Afghanistan.

The Shadow, which is also fielded by the Marine Corps, has an extensive operational history in Afghanistan and Iraq. The aircraft is used to conduct surveillance in ongoing operations against the Islamic State group in Iraq, according to Army releases.

The aircraft is slated to replace the reconnaissance mission of the Army’s OH-58 Kiowa Warrior helicopters as part of a restructuring plan started in 2014. All 10 divisional aviation brigades across the Army will field the Shadow aircraft alongside AH-64 Apaches by 2019, according to Army planning documents.

The Shadow’s pairing with Apache crews will expand surveillance and scouting abilities by patching in direct video feeds of distant objectives and enemy positions, the Army has said.

As the use of unmanned aircraft rises, it’s important to re-examine beliefs and misconceptions about technology, Scharre said. Most people understand glitches and software failures occur just by using cell phones and computers, for instance, but often do not apply the same understanding to unmanned aircraft, he said.

No technology can quite match the reasoning of a human, Scharre said.

“Imagine a soldier on Fort Huachuca getting lost doing land navigation," he said. “He’s not going to keep going and wander into Colorado.”