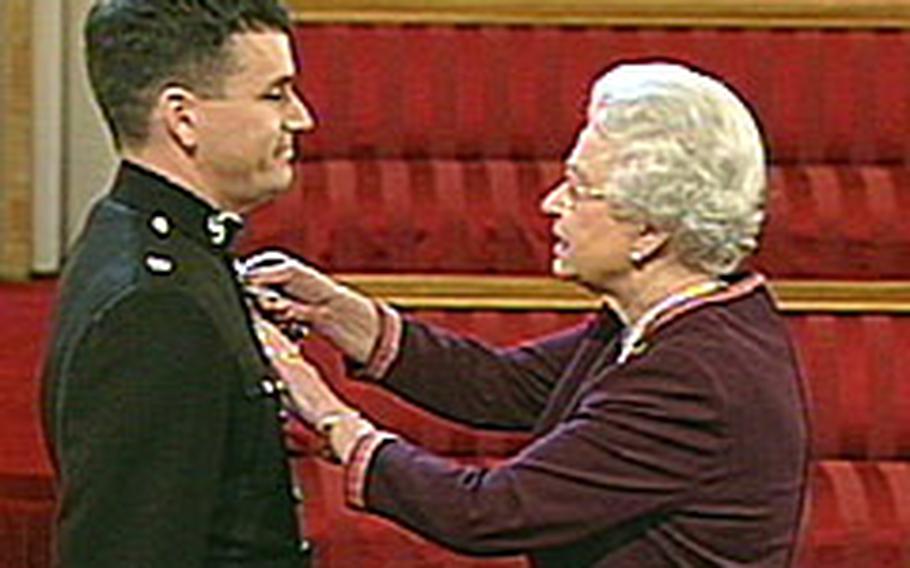 A U.S. Marine helicopter pilot who helped save a British marine&#8217;s life in Iraq was awarded the British Distinguished Flying Cross on Wednesday, the first time an American has received the honor since World War II.

In a Buckingham Palace ceremony in London, Queen Elizabeth II pinned the medal on U.S. Marine Maj. William D. Chesarek Jr. He has served as the weapons and tactics instructor with the British 847 Naval Air Squadron since 2005 as part of an exchange program between the two countries.

His actions during a deployment last year to the British area of operations in Iraq, centered in the southern city of Basra, were cited in receiving the prestigious award, roughly the equivalent of the American Silver Star.

The mission started late on the night of June 10, 2006, as Chesarek and his crew were preparing to support about 100 British marines from the 20 Armoured Brigade as they looked for an insurgent weapons cache in the city of Amarah.

He was piloting a Lynx AH47 helicopter, which usually supported each battle group of a few hundred British troops.

As the ground force prepared to leave Amarah after wrapping up the weapons search, one vehicle became disabled. And insurgents took advantage.

While Chesarek and his men in the air tried to find the sources of insurgent attacks &#8212; he estimated it was the work of five to 10 groups of three to five men &#8212; civilians started emerging, making it more difficult for the helicopter to single out and fire back at the insurgents.

&#8220;Obviously that has a huge impact on everything the guys on the ground are doing, as far as trying to avoid anything with noncombatants, and trying to effectively engage insurgents,&#8221; Chesarek said.

As the summer sun got higher in the sky, attacks on the marooned ground forces increased, and one British marine was shot in the head. Chesarek and his crew landed and evacuated the casualty.

Chesarek also drew enemy fire away from the ground troops and called in other air support that helped disperse the insurgents.

As the chopper pulled away from the scene, a rocket-propelled grenade barely missed its tail.

Though he had supported U.S. Marines on similar missions, those close calls never stop feeling too close for comfort, he said.

&#8220;I had been through some scenarios which age you significantly,&#8221; he said. &#8220;You&#8217;re that much more prepared for it when it happens again, and you&#8217;re grateful when it misses you. I remember looking behind me in the face of my door gunner and laughing briefly at the expression on his face just after that barely missed.&#8221;

Chesarek, of Newport, R.I., is the first American to receive the medal since World War II, according to David Stevens, a British Ministry of Defence representative.

Chesarek, who is an AH-1W Super Cobra helicopter pilot for the U.S. Marines, was modest about the honor.