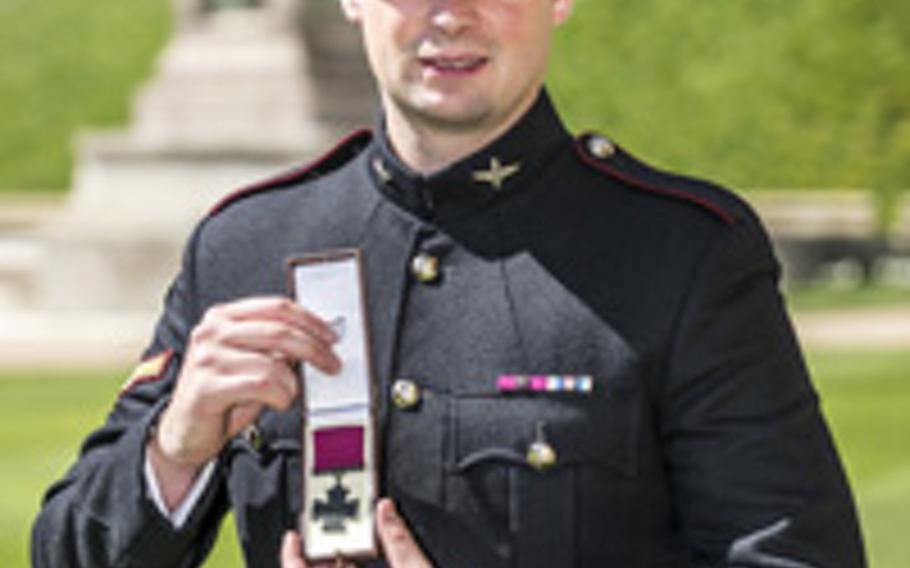 A British paratroop who helped save the life of a U.S. Marine officer in Afghanistan has received Britain’s highest award for valor.

Lance Cpl. Joshua Leakey of the 1st Battalion, Parachute Regiment, received the Victoria Cross from Queen Elizabeth II on Tuesday during a ceremony at Windsor Castle.

The 27-year-old received the medal for “battlefield gallantry” after a routine patrol of British and U.S. forces was ambushed in Helmand province on Aug. 22, 2013. Insurgents attacked the patrol with machine guns and rocket-propelled grenades, wounding a U.S. captain and pinning down the patrol’s command team.

A British army news release credited Leakey with “single-handedly” turning the tide of the battle. He provided medical care to the captain, then helped a friendly machine gun position return fire before running down the hill to pick up a second machine gun and carry it up the slope to return fire.

Leakey also led the extraction of the wounded.

“I don’t get to give this one out very often,” the queen said during the ceremony.

“You don’t really think what could happen to yourself, you think ‘how is what I’m doing now going to improve the situation?’” Leakey said. “It’s part of the very nature of being in the army, and especially the Parachute Regiment, that we have to adapt to situations you don’t expect to happen.”