Quality of life was poor for GIs at Abu Ghraib 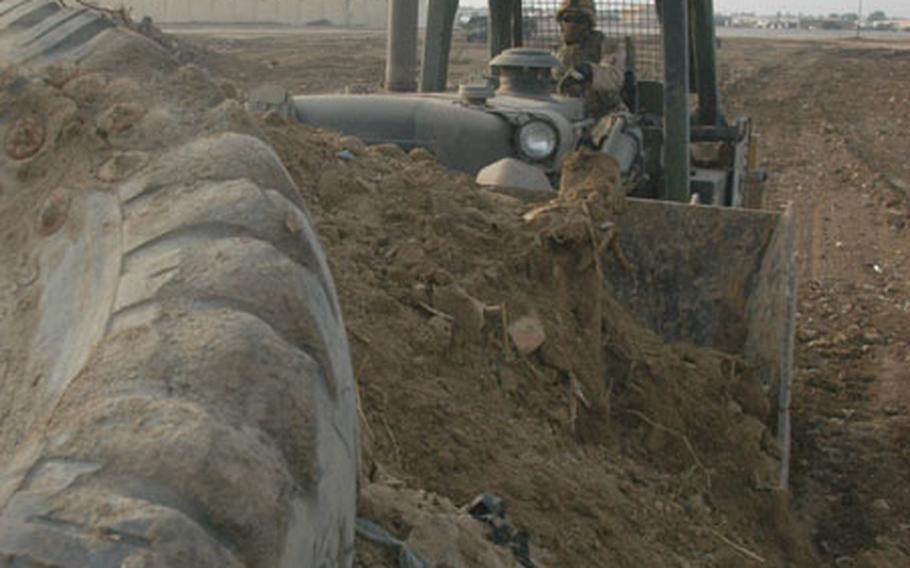 A gag-inducing stench of rotting trash filled the air in January as Pfc. Marcus Bradley, 25, of Providence, R.I., drove his bulldozer into a large mound of dirt and debris at Abu Ghraib prison in Iraq. (Rick Scavetta / S&S)

For U.S. troops, staying in camps at Abu Ghraib prison last year was like living in a trash dump &#8212; because prior to their arrival that&#8217;s what it was.

An Army health and sanitation report published in December details substandard conditions for troops at Abu Ghraib &#8212; a problem Army engineers spent months trying to fix. And according to a recent Army investigation into alleged abuses at the prison, poor living conditions may have contributed to problems there.

Abu Ghraib prison, known to troops as Baghdad Central Confinement Facility, lies along the highway to Fallujah about 15 miles west of Baghdad. Under Saddam Hussein, it was notoriously known for horrible conditions, tortures and executions. Prior to the U.S.-led invasion, the Iraqi dictator released prisoners from the jail.

When troops took over the site, it was full of Iraqis&#8217; trash, said Capt. Thomas Janousek, commander of the 14th Medical Detachment, an Army Reserve unit from Springfield, Mo., that conducted health assessments at the camp.

When the detachment arrived at Abu Ghraib in June, conditions were horrible, said Spc. Sara Bailie, 21, an environmental specialist assigned to the detachment. Bailie described the place as a &#8220;mass grave,&#8221; with &#8220;wild dogs running around with bones and body parts.&#8221;

The detachment made several trips to the prison for assessments and to teach troops about field sanitation, Bailie said.

In a Dec. 16 report, Janousek described awful camp conditions: rodents with plenty of garbage to feed upon, unsanitary showers with pools of &#8220;gray water&#8221; forming below and &#8220;black water&#8221; or raw sewage dumped near the prison walls, &#8220;an immediate reservoir for fecal oral disease.&#8221; The team recommended that the Army drain standing water throughout the complex to avoid further insect and rodent infestation.

The report, which was posted on soldiers&#8217; bulletin boards, did not outright condemn the camp, but it may have helped &#8220;push the ball along&#8221; on slow-moving renovations, Janousek said.

On Nov. 19, Col. Thomas Pappas, commander of the 205th MI Brigade, assumed control of the base camp. Pappas did not return phone calls. Requests to speak with him were denied by V Corps, his higher headquarters in Germany, because of ongoing investigations into prisoner abuses.

The controversy surrounds a small number of soldiers from the Army Reserve&#8217;s 372nd Military Police Company, a subordinate unit to the 800th Military Police Brigade.

In January, the Army ordered Maj. Gen. Antonio Taguba to investigate the 800th Military Police Brigade&#8217;s operations. While the brigade was responsible for all Army-run prisons in Iraq, Taguba&#8217;s report focuses on Abu Ghraib. The internal report was recently published on several Internet sites.

&#8220;The quality of life for soldiers assigned to Abu Ghraib was extremely poor,&#8221; according to Taguba&#8217;s report, which also noted there was no military-run dining facilities, post exchange, barbershops or any Morale, Welfare and Recreation activities. Contracted civilians provided food while soldiers mostly shopped at small bazaars run by local Iraqis.

When walking outside, soldiers often wore full combat gear in case of attacks. By January, troops appeared numb to the random incoming mortar. Some soldiers described one attack where three dozen mortars walked into their living area.

According to the report, investigators suggested that &#8220;psychological factors, such as the difference in culture, the soldiers&#8217; quality of life, the real presence of mortal danger over an extended time period, and the failure of commanders to recognize these pressures contributed to the perversive atmosphere,&#8221; at the prison.

As early as last summer, the Army considered not using prison grounds as a base camp for soldiers, said a senior Army engineer who visited the site. He visited Abu Ghraib in January as engineers began a new phase of improvements.

The Vilseck, Germany-based 94th Engineer Battalion, under the command of Lt. Col. Paul Grosskruger, set to work last summer. They cleared much of the trash and built prisoner holding areas. In September, they renovated prison cells where soldiers lived and created partitions inside prison buildings for living and office space.

In early January, engineers began a $1 million project to expand the prison and upgrade soldiers&#8217; quarters, said Capt. Kevin John, 32, of Hazelton, Pa., a base engineer.

Plans were for up to 1,200 soldiers to move into mobile trailers, allowing them to vacate prison cells they called home. Kellogg, Brown & Root was tasked to provide a mess hall, troop morale programs and base maintenance, John said.

Engineers began building tent cities within the prison walls to house 2,000 prisoners and allow military intelligence personnel to separate up to another 1,000 prisoners for interrogation. The prisoner tents were designed to have concrete floors and be surrounded by a chain link fence, John said.

Janousek, an entomologist who has now returned to his civilian life in Omaha, Neb., knew the engineers were working hard to make improvements and was glad to see that his detachment&#8217;s work had helped, he said.