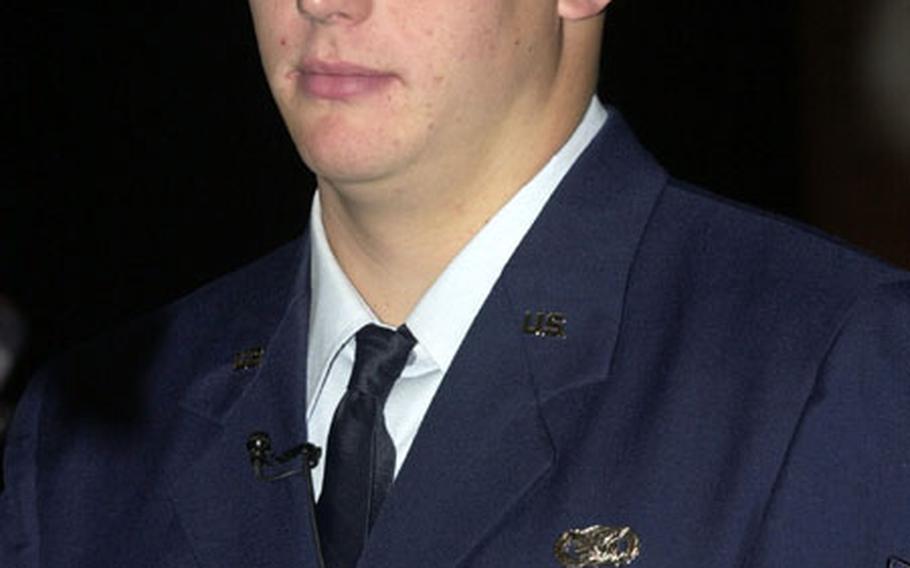 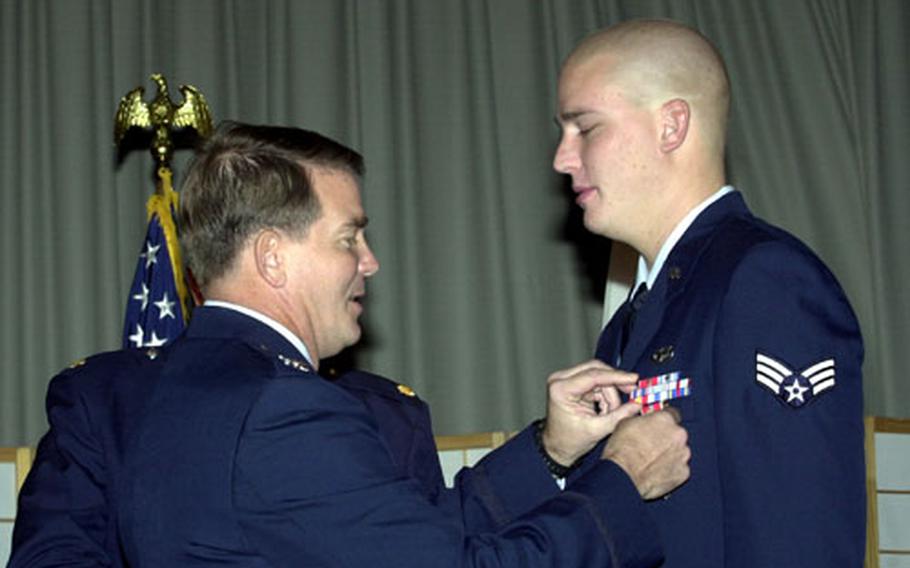 YOKOTA AIR BASE, Japan &#8212; The incident barely caused a stir.

CNN broke the story the same day, Nov. 7, 2001, with all of five sentences on its global Web site.

But for the Yokota airman who saw bullets from an AK-47 rifle sail toward him in slow motion, the surreal firefight changed his life.

Senior Airman Clinton Boyd killed a man. And on Thursday morning, at a ceremony here, he received the Bronze Star for valor, the nation&#8217;s fourth-highest combat award.

The act outside Al-Udeid Air Base, Qatar, was more than self-preservation: Boyd potentially saved the lives of 20 Americans, officials said, and in the eyes of one Air Force general, prevented a new terror attack from escalating the nation&#8217;s fears on the heels of Sept. 11.

For 30 seconds, it was an intense battle between two men with guns.

President Franklin D. Roosevelt established the Bronze Star Medal in 1944 by executive order. The medal &#8212; a red, white and blue ribbon atop a bronze star &#8212; is awarded for heroic or meritorious combat achievement or service, not involving aerial flight.

Boyd, 22, appeared stoic while base leaders and 374th Security Forces Squadron members gave him a standing ovation. He tried to ignore the applause, he said later.

The award might lead to swifter promotions or career-building assignments, but Boyd said that day in Qatar changed his life more than the piece of metal now pinned to his uniform.

&#8220;The whole idea of killing someone and having to live with it, having no remorse because that man was trying to kill you,&#8221; he explained. &#8220;I was told after it happened, I would probably break down and cry. It never once crossed my mind.&#8221;

In late 2001, the U.S. military started building up Al-Udeid, a remote base in the central Persian Gulf, about 20 miles from Qatar&#8217;s capital, Doha.

Members of Yokota&#8217;s 374th SFS deployed to Qatar in mid-October, soon after the war on terrorism began. A tent city was raised, and computer monitors, communications gear and intelligence equipment were installed. The base&#8217;s primary mission is tanker support for KC-10 and KC-135 aircraft, said Capt. William Barron, who, along with Boyd, was in Yokota&#8217;s Security Forces group at Qatar.

Barron was working in the base defense operations center when the call came in: &#8220;The gate was under attack.&#8221;

A mile from the base, Boyd and an unarmed Qatari guard stood at a traffic checkpoint. Authorized contractors were permitted to deliver food and water on base. That day, 12 Security Forces troops were in the so-called &#8220;search pit&#8221; to look in vehicles, while eight U.S. military escorts waited to ride with contractors onto base.

The search area was built a mile away due to logistic difficulties in controlling traffic inside the gate, Barron said.

Boyd had been at his post since 2 in the morning. At 10:30 a.m., he noticed the muzzle of an AK-47 rifle protruding from the driver&#8217;s window of a private vehicle that approached him and the guard outside the checkpoint. The 6-foot-6-inch Boyd immediately ducked behind a concrete barrier and drew his M-9 pistol.

The driver began shooting, and Boyd had returned fire when the man left the car and ran toward the Qatari guard. The guard knelt on the ground, with hands over his head, while the attacker shouted in Arabic and held him briefly at gunpoint. The guard then ran off, unharmed.

Boyd said he stopped firing at that point, because he didn&#8217;t want to hit the guard.

But the assailant wasn&#8217;t finished: He began moving out from behind the gate shack toward Boyd, all the while firing.

He was &#8220;15 feet and closing&#8221; from Boyd before he was felled. Boyd unloaded an entire 15-round magazine from his handgun, shooting his attacker six times. The gunman, meanwhile, had reloaded his semiautomatic rifle with a second 30-round magazine during the firefight.

&#8220;It would have been better to have an M-16 out there,&#8221; Boyd said. A U.S.-Qatar agreement prohibits military members from carrying rifles off base.

Boyd and his parents, who flew in from the United States, talked about the incident after the medal ceremony.

&#8220;One of the things that he told me was that he saw one of the rounds come out of an AK-47 and track all the way at him like it was in slow motion and hit the Jersey barrier where he was firing from,&#8221; said Maj. Stan Boyd, an active-duty reservist from Scott Air Force Base, Ill.

Qatar officials named the attacker as Abdullah Mubarak Tashal al-Hajiri, a Qatari. The man was said to have been mentally unstable, &#8220;but that&#8217;s probably just a cover-up,&#8221; Boyd said.

Boyd&#8217;s parents feared retribution from other attackers after the incident, but Boyd remained in Qatar until March 2002, when his squadron returned to Yokota.

Mentemeyer said, as Barron noted in his speech, that &#8220;at a moment when force protection was a constant worry and threats to troops were a nagging fear, even a handful of casualties from a new terror attack could only have inflamed fears further. Instead, the incident quickly faded away.&#8221;

Boyd doesn&#8217;t know when he&#8217;ll return to the desert. He&#8217;s been selected for promotion to staff sergeant and soon will start a new assignment at Sembach Air Base, Germany, with the contingency-response group there.