Qatar blockade unlikely to affect US troops at al-Udeid base, officials say 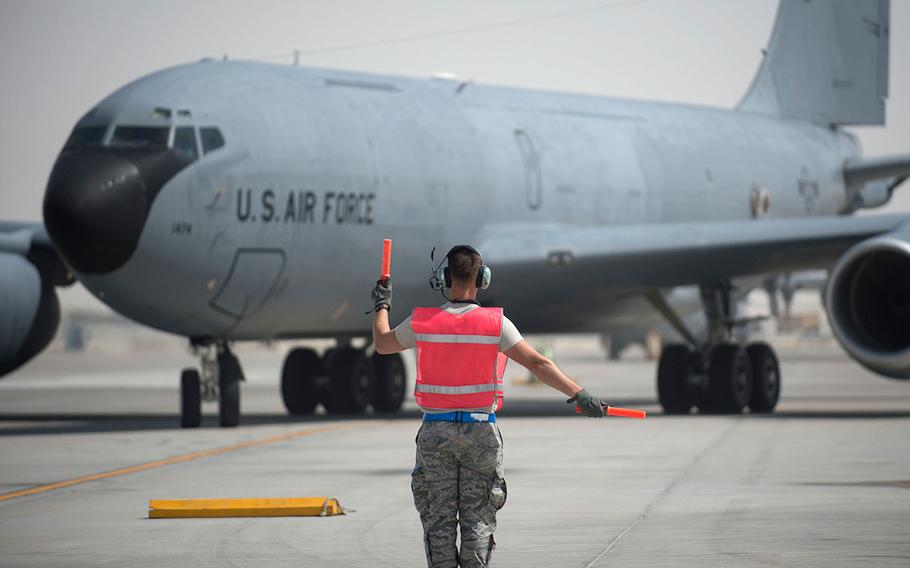 A land blockade from Saudi Arabia into Qatar has not halted the flow of goods into the U.S. military's strategic Al-Udeid Air Base, which relies "very little" on ground transportation, U.S. military officials said Tuesday.

Atanasoff couldn’t get into specifics on how the sprawling base is supplied due to operational security, but said the military maintains a range of transportation options to avoid any breakdown in the base’s supply chain.

Flights in and out of the base, a key staging area for U.S. operations against the Islamic State in Iraq and Syria, are also continuing despite a growing diplomatic row in the region that threatens to engulf some members of the U.S.-led coalition.

“The United States and the Coalition are grateful to the Qataris for their longstanding support of our presence and their enduring commitment to regional security,” Atanasoff said. “We encourage all our partners in the region to work towards common solutions that enable regional security.”

However, the dispute between the tiny Gulf state of Qatar and four other countries that include regional powerhouse Saudi Arabia is among the area’s most significant diplomatic clashes since the 1991 Gulf War. And on Tuesday, President Donald Trump appeared to take sides.

“During my recent trip to the Middle East I stated that there can no longer be funding of Radical Ideology. Leaders pointed to Qatar — look!,” Trump said in a morning tweet.

Kuwait is now attempting to serve as a mediator between Qatar and its opponents, Qatari’s foreign minister said Tuesday.

Saudi Arabia, which has accused Qatar of funding terrorist organizations, imposed an economic blockade on Monday by stopping overland shipments of food and other goods. A peninsula-state whose only land border is with Saudi Arabia, Qatar is heavily reliant on food shipments from that country. Egypt, Bahrain and United Arab Emirates also said they were cutting diplomatic ties with Qatar and threatening to sever air and sea travel.

However, the more than 11,000 Americans stationed at Al-Udeid are unlikely to be affected, U.S. Air Forces Central said. Some 500,000 meals are served at base dining facilities every month, a 2016 379th Air Expeditionary Wing release said.

While Bahrain, home to the Navy’s 5th Fleet, is among the nations at odds with Qatar, operations there have also not been affected, according to Navy officials.

The dispute between the Gulf states comes two weeks after Trump’s high-profile visit to Saudi Arabia, which rolled out the red carpet for the new American president with ceremonies full of regal pomp. The visit culminated with Trump getting six Gulf state to sign a communiqué that stated each nation would fight to eliminate the funding of jihadist organizations.

Now, members of that coalition are lashing out at Qatar on a range of issues, such as its support for the Muslim Brotherhood, ties to Iran, and alleged funding of al-Qaida’s affiliate in Syria. Damascus itself has repeatedly accused Qatar of also funding and equipping the Islamic State militants who still occupy wide swathes of Syria and Iraq.

Washington has been suspicious of Qatar’s support for Islamic militant groups going back to the Bush administration, even as the American military rooted itself at Al-Udeid.

Defense Secretary Jim Mattis has played down the divisions among Gulf States and said the fight against the Islamic State group would move forward.

“I am positive there will be no implications coming out of this dramatic situation at all, and I say that based on the commitment that each of these nations that you just referred to have made to this fight,” Mattis said in Australia on Monday.