Qada chief: No retreat from al-Qaida in Iraq Pfc. Tyler Frame of the 1st Battalion, 14th Infantry Regiment guards an alleyway during a patrol on the city of Tarmiyah Tuesday. The area has been the target of several al-Qaida in Iraq attacks in recent days. (Leo Shane III / S&S)

Pfc. Tyler Frame of the 1st Battalion, 14th Infantry Regiment guards an alleyway during a patrol on the city of Tarmiyah Tuesday. The area has been the target of several al-Qaida in Iraq attacks in recent days. (Leo Shane III / S&S) 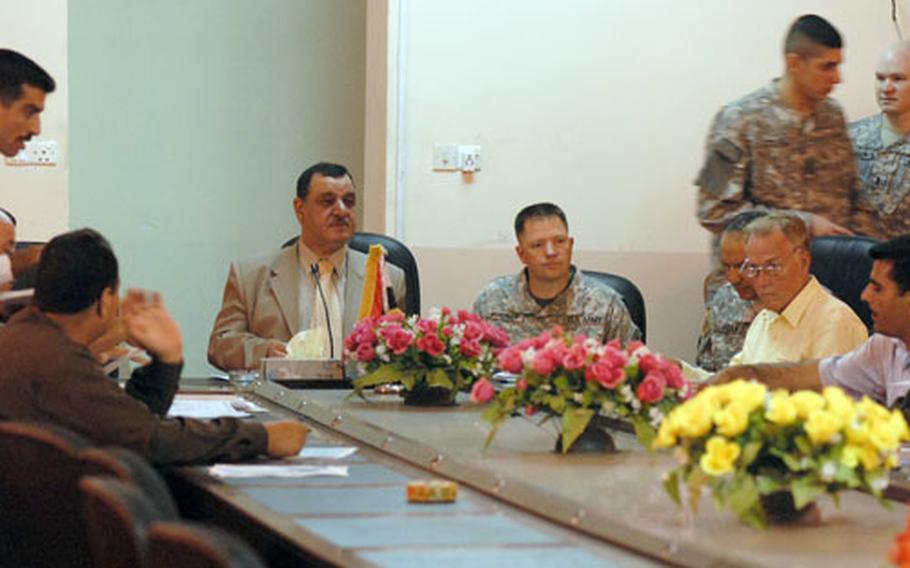 TARMIYAH, Iraq &#8212; Less than a week after his son was nearly killed by a suicide bomber, council chairman Sa&#8217;ed Jassim al-Mashadani opened the weekly qada government meeting with an emphatic speech to his fellow elected officials.

The attack, which happened less than a block from the council&#8217;s meeting chamber, killed seven others, including members of the "Sons of Iraq."

Al-Mashadani&#8217;s son was head of the local chapter, making him a natural target for insurgents in the region.

U.S. officials pinned the attack on al-Qaida in Iraq, calling it the latest in a series of attacks by the group here in recent weeks.

Violence in the region, which sits just an hour drive of Baghdad&#8217;s northern borders, has been down significantly from a year ago, officials said. But Maj. Todd Woodruff of the 1st Battalion, 14th Infantry Regiment, said security forces are still dealing with a significant underground presence in the area.

"This is a strategic waypoint for them, as they move between places like Baghdad, Mosul and Diayla," he said. "It&#8217;s a place where the enemy has decided to try and retain a presence."

About an hour before Tuesday&#8217;s council meeting, another roadside bomb detonated at a nearby Sons of Iraq checkpoint, killing a local civilian.

Woodruff&#8217;s patrol had passed through the post just minutes earlier.

The previous day, U.S. forces in the same area captured two men they believe are al-Qaida leaders connected to the bombing. They discovered another roadside bomb before it detonated Tuesday afternoon.

But they still expect more attacks in the city and surrounding neighborhoods through Ramadan.

"The good news here is we&#8217;ve been able to absorb the attacks so far," Woodruff said. "They hit us, or the Iraqi police and Sons of Iraq, and we grieve. But the local citizens have been largely able to continue their normal lives."

Iraqi government officials in the area are funding construction of a new bank, renovations to the city&#8217;s water lines, and 17 different school improvement projects in the region.

Members of the qada council spent much of Tuesday&#8217;s meeting discussing those projects and similar reconstruction efforts. But they also took time to condemn the recent attacks, and to vent their frustration at the still-fragile security situation.

When one council member demanded to know when the Iraqi army would root out the local al-Qaida terrorists, another angrily responded that they shouldn&#8217;t have to wait for help from Baghdad.

Al-Mashadani, though visibily upset and angry about the attacks, urged a calmer approach, working with the coalition and Iraqi security forces to find the culprits and bring them to justice.

Meanwhile, he encouraged his council members to stick to the most important part of their job: rebuilding the area to make it safe and more hospitable for law-abiding residents.

"What these terrorists do has nothing to do with Islam," he said.

"We&#8217;ve pledged to our local citizens that we will work for them. I will not retreat."

U.S. officials said the condition of al-Mashadani&#8217;s son worsened on Tuesday, and medics had to amputate one of his legs.

They are providing the council leader with daily updates on his status.