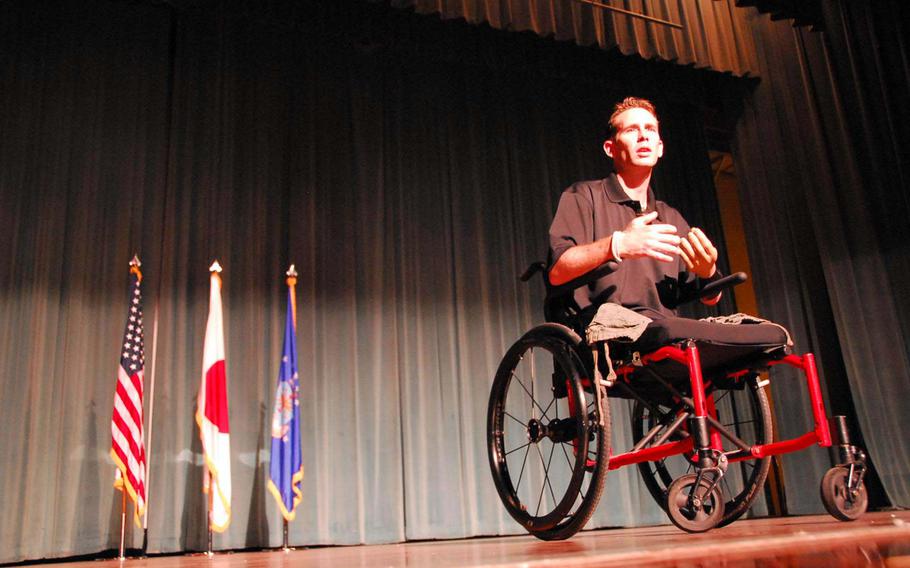 Buy Photo
Bryan Anderson, an Iraq war veteran and triple amputee, speaks June 18 at the Keystone Theater at Kadena Air Base on Okinawa. Anderson, who won a regional Emmy for his PBS series, also appeared in ''The Wrestler,'' with Mickey Rourke. (Travis Tritten/Stars and Stripes)

CAMP FOSTER, Okinawa — Bryan Anderson is living proof that even the most severe wounds of war can be overcome.

The Chicago native shipped out with the Army on Sept. 12, 2001. On his second deployment to Iraq in 2005, he lost both legs and his left hand to an improvised explosive device.

Since then, his perseverance and positivity as a triple amputee has captured the nation’s imagination—in magazines, documentaries and even a comic book—and shown what is possible for a new generation of wounded combat veterans.

Anderson is a spokesman for the post-9/11 veterans aid group USA Cares, a sometimes actor and stuntman, a wheelchair design consultant, television host and aspiring pilot. He recently won a regional Emmy Award for hosting “Reporting for Duty with Bryan Anderson” on PBS, appeared in the 2007 HBO documentary “Alive Day Memories: Home from Iraq” and made the cover of Esquire magazine.

Relying on a robotic hand prosthetic, Anderson is known for pushing his physical limits by rock climbing, skateboarding, snowboarding, white-water rafting, skiing and other sports usually deemed too demanding for multiple amputees.

He travels often as a motivational speaker, sharing his story with military and civilian audiences. Stars and Stripes sat down with Anderson on June 18 during a speaking tour of U.S. military bases on Okinawa.

Q: You always seems busy with some new project. Besides motivational speaking, what are you up to these days?

A: I have, like, six jobs, and one of them is being the spokesman for this wheelchair company. I get to help test and design wheelchairs, and really, I just get to beat the crap out of wheelchairs. I try to make them sturdier and stronger. The first thing I said to the CEO when I walked in there was, “Why do we have to make wheelchairs so ugly?” I want somebody to be watching me roll down the street be like, “I want one of those.” Five years later, our chairs are actually pretty cool looking. I’m going to continue doing that. But I always want to be doing something for the first time, because ... that’s what you learn from.

Q: You recently received a regional Emmy Award for your PBS series, which focused on an urban farm for kids and other community services in Chicago. What were you trying to accomplish with the series?

A: To show there are people making a difference in the community. They don’t have to be big corporations. It could just be a Joe Schmo doing something. Second, it was to get that person who wants to volunteer, who is looking for something to do but just doesn’t know what to do. Here is this triple amputee digging in the dirt with the kids, you know, just getting down and dirty. Maybe they will think if he can do it, I can do it.

Q: Did the Chicago community help in your recovery after you came home from Iraq?

A: Chicago embraced me, and that made it OK for me to venture out and do things, to just go out in public instead of being shy. I wanted to give back to Chicago because they’ve given me so much. They’ve given me the right mindset and shown me that anything can be done.

Q: You’ve said your injuries don’t define you. Even with all your success, do people still try to pigeon-hole you as a veteran amputee?

A: People who don’t know who I am, all they see is a triple amputee and think, “Oh, I feel so bad for you.” But that is just because they don’t know that I’m OK with it. I try to make it OK by my attitude and my actions. ... I’m trying to prove people wrong. Just because there’s a guy rolling around in a wheelchair or there’s a triple amputee doesn’t mean you have to feel so bad for them.

Q: Even before your injuries, you dreamed of becoming a stunt man and have worked on movies and TV shows. Is that something you’re still pursuing?

A: Absolutely. Because I do so much and I travel so much, I don’t really go out and look for those types of jobs, but every once in a while those jobs tend to present themselves. When they do, I definitely jump on that. Maybe when I have a little more time I will actually go out and get an agent to help find those kinds of jobs. But right now having that opportunity come once or twice a year is absolutely fine with me.

Q: What was it like working on “The Wrestler,” the 2008 movie starring Mickey Rourke?

A: The stunt coordinator had seen me in Esquire and said, “I want to give him a shot.” We were all standing in a circle -- just me, (director) Darren Aronofsky, Mickey Rourke and Douglas Crosby, the stunt coordinator – saying, “What can we do, what can we do?” The first ideas were to have Mickey Rourke and the wrestler actually wrestle into me and knock me over. I would come rolling out of my chair and get pissed off and start fighting with them. But then they were like, “Do your legs come off?” So instead, I stop Mickey Rourke from hitting him with the chair and say, “No, no, no, use my leg.” I pull off my leg and I hand it to him. He picks up my leg and hits the guy with it.

Q: Immediately after you were injured by the IED in 2005, you cracked jokes to the soldiers who helped save your life. How do you stay so positive?

A: I get that question every so often, and it seems like the answer is always different. It sucks to be depressed, and why would you want to put yourself in that situation? ... If you can find something good out of every bad situation, it doesn’t make it so bad. I was like, “Why don’t I just try to start doing that all the time?” ... Every time I’ve felt like the world’s crashing down on my shoulders, like I can’t possibly pull out of this, it’s ended up being the best thing that’s ever happened to me.

Q: What was the hardest part of your recovery?

A: First it was the mental battle. I had a positive attitude for the first four months and then I hit a depression. There were a lot of different things that helped me out of it -- music and also another triple amputee. He was exactly a year and two days wounded before me, so he’d already been through this a year ahead of me. What he said was, “You have to accept that this is the way that you are. You can’t change it – your legs are gone, your hand is missing. Are you going to sit and dwell on it or accept that this is who you are now and move on from there?” That was the turning point for my mental battle.

Q: What would you say to severely injured servicemembers who are now just starting that journey?

A: I know things hurt and you feel raw. You feel like you’ve been kicked and you’re down for the count. But you need to take it a day at a time. You have to let things unfold and see where it goes, then start making decisions and taking back your life. It certainly doesn’t mean that your life is over. I’ve seen amazing things from guys who are missing all four limbs. It is all in how you perceive it and what your attitude allows you to do.