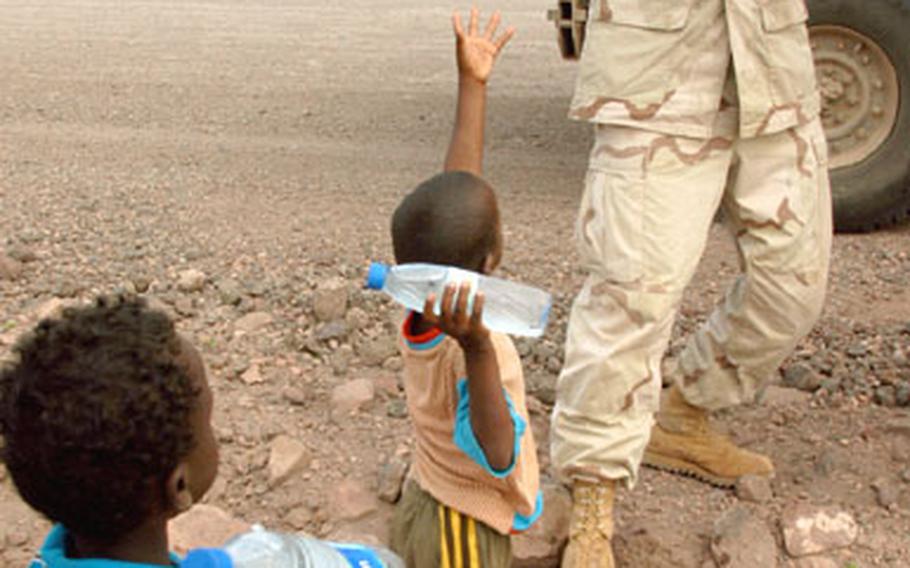 Staff Sgt. Arthur Dodds, 35, an Army reservist from Hopedale, Ohio, hands out water to Djiboutian children on a road that he helped repair near Djibouti City. (Kendra Helmer / S&S)

Staff Sgt. Arthur Dodds, 35, an Army reservist from Hopedale, Ohio, hands out water to Djiboutian children on a road that he helped repair near Djibouti City. (Kendra Helmer / S&S) 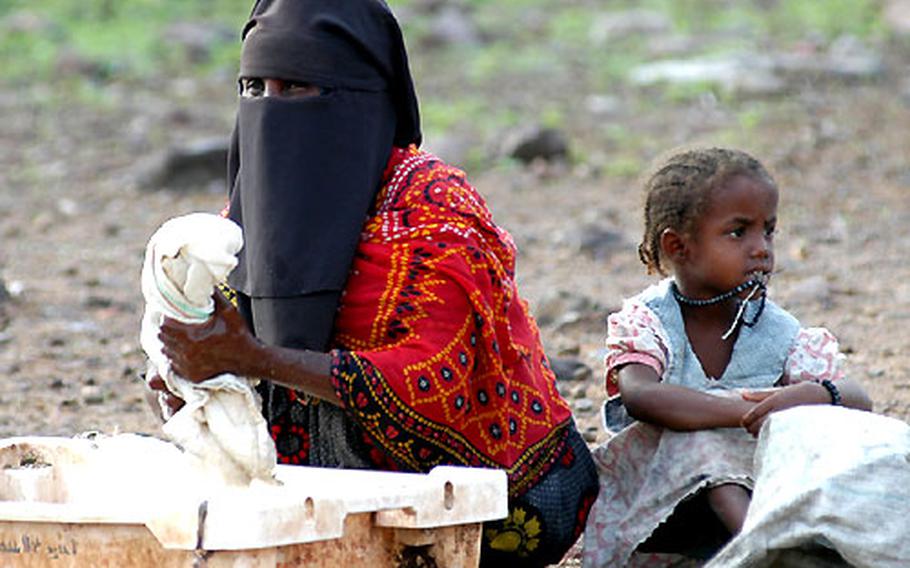 A Djiboutian woman and her child sit in a dry riverbed while their relatives&#39; goats and camels are tended to by the 412th Civil Affairs Battalion during a civil action program in a remote valley near Tadjoura. (Kendra Helmer / S&S) 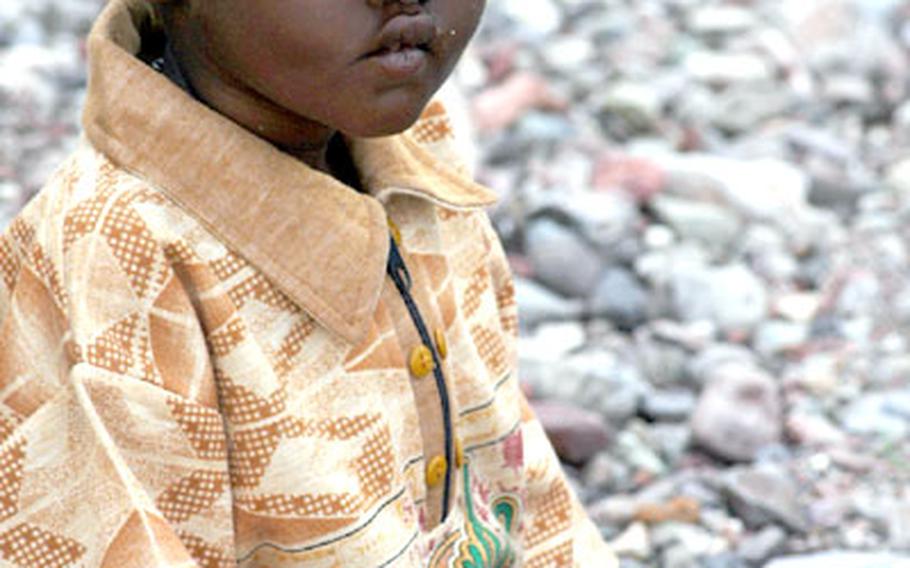 A shy Djiboutian child waits for his family’s goats and camels to be treated by reservists with the 412th Civil Affairs Battalion. (Kendra Helmer / S&S) 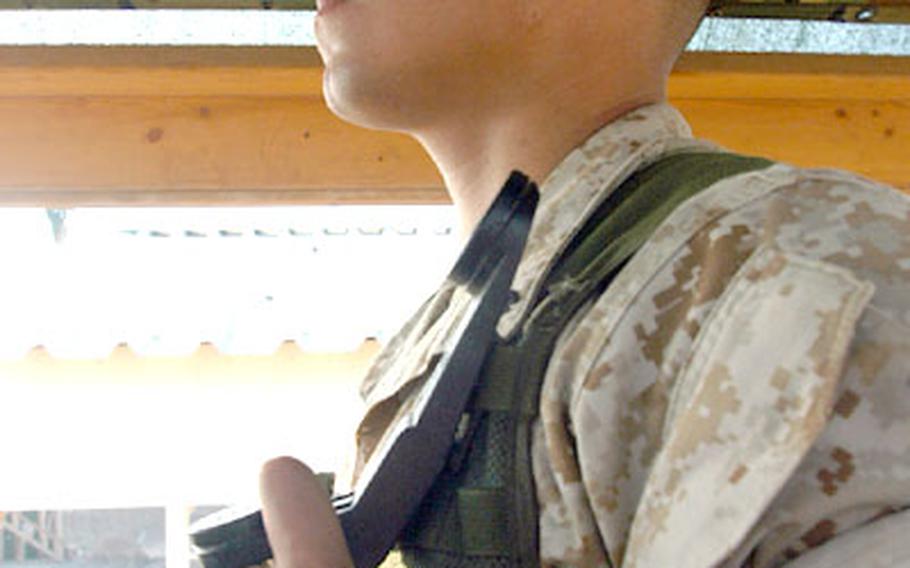 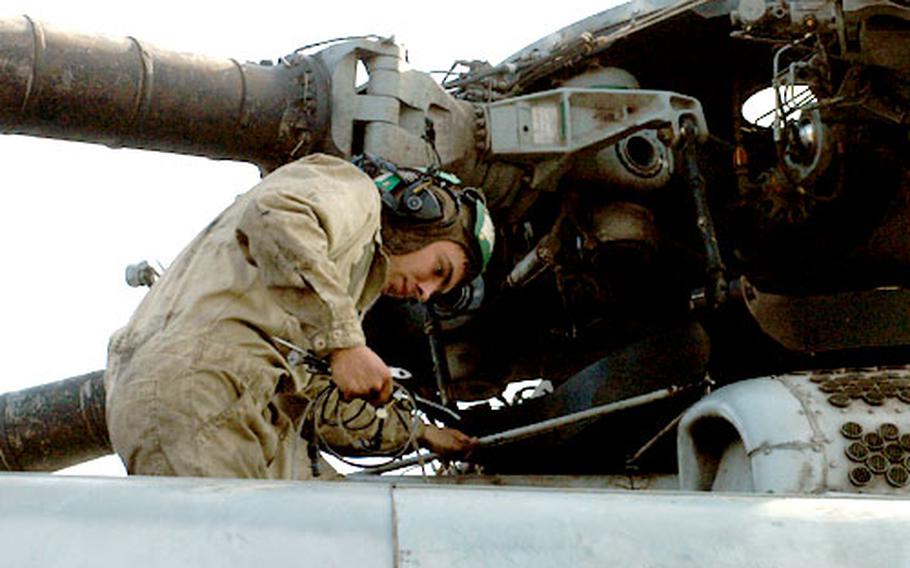 CAMP LEMONIER, Djibouti &#8212; From an arid camp in northeastern Africa, U.S. forces are fighting a less visible war on terrorism.

Through intelligence gathering, training local militaries and promoting a positive image of Americans, the U.S. military hopes to keep transnational terrorists from finding a safe haven in the Horn of Africa.

U.S. troops moved into the former French Foreign Legion post in summer 2002 to stem any terrorist flow out of Afghanistan.

&#8220;I think our goal has gone from protecting the flank and catching the bad guys from Afghanistan to assisting the states in the region to fight the terrorist threat that&#8217;s already existing,&#8221; said Marine Lt. Col. Walter Lundin, head of the task force&#8217;s plans division.

Djibouti, a country the size of Massachusetts, is an ideal location for the task force&#8217;s headquarters because the country has good relations with its neighbors, Lundin said. The CJTF-HOA&#8217;s region covers the total airspace and land areas of Kenya, Somalia, Sudan, Eritrea, Djibouti, Yemen and Ethiopia and the coastal waters of the Red Sea, Gulf of Aden and Indian Ocean.

Djibouti is an hour&#8217;s boat ride from Yemen, where terrorists bombed the guided-missile destroyer USS Cole in October 2000. The al-Qaida network is also suspected in other attacks in the region, including the 1998 bombings of U.S. embassies in Kenya and Tanzania, and the November 2002 bombing of a Kenyan hotel and the attempted attack on an Israeli airliner. Al-Qaida cells are known to operate in Somalia.

The 90 troops involved in humanitarian projects are among the more than 520 personnel assigned to the task force. About 400 more troops are assigned to Marine Central Command, in charge of base operations.

Also based at the camp are about 45 personnel with the Joint Special Operations Task Force. They work with Djiboutians, Yemenis and Kenyans in predominantly maritime and border security training, said Lundin, 39, from New Orleans.

By teaching coastal units basic maritime skills and boarding procedures, they hope to deter the illicit movement of drugs and weapons, said Lundin, noting, &#8220;We&#8217;re not interested in enforcing the local laws on drug trade and all that. We are interested in those activities that finance or support transnational terrorism.&#8221;

Lundin said that while U.S. forces have not apprehended any suspected terrorists, Kenyans and Ethiopians regularly are in battles with the enemy.

Lundin said U.S. forces have come under attack once in the region, when they took rounds from unknown attackers while training in Ethiopia. No one was injured.

One U.S. servicemember died while serving in Djibouti. In a training accident on June 22, an Air Force B-52 dropped bombs near two CH-53E helicopters, killing Marine Capt. Seth Michaud, a helicopter pilot, and injuring seven other Marines and a sailor.

While no forces have been attacked in Djibouti, troops are reminded to keep a low profile, and the liberty policy changes daily to avoid a pattern. Because the military wants to gain people&#8217;s trust, troops conceal their weapons when working off base with some exceptions, such as during missions in rural areas.

There is a more visible presence of French troops in Djibouti, France&#8217;s largest foreign military base. Djibouti gained independence from France in 1977.

Lundin said he thinks there will be a U.S. presence in the region for about 10 years, which will gradually decrease as local states create a stable environment where terrorists cannot operate.

U.S. troops rotate into and out of the area on a regular basis, with a deployment varying from a few months to a year. The experience has been an eye-opener for many troops who have never been overseas. In the summer, they sweat it out in 130-plus-degree temperatures. In January, it&#8217;s 90 degrees in the shade.

Some Marines with the 3rd Battalion, 2nd Marine Regiment, 2nd Marine Division, said it&#8217;s been a difficult transition from infantry duties in Iraq to pulling guard duty in Djibouti.

It&#8217;s also been a change of pace from Iraq for Heavy Marine Helicopter Squadron 464, which spent nine months of the past year deployed, said Capt. Gary Wilds, 33, a pilot from Vero Beach, Fla.

Unlike in Iraq, he said the 70 or so squadron members usually get one day off a week here when they aren&#8217;t running supply missions to U.S. infantrymen at the newly established Camp United in Ethiopia or doing inserts and extracts with special forces.

And troops at Camp Lemonier say though their role in the war on terrorism may not be as visible as that of their counterparts in Iraq and Afghanistan, &#8220;We&#8217;re definitely playing a part, whether it&#8217;s a minute part or not,&#8221; said Spc. George Meacham, 23, of the 3rd U.S. Infantry Regiment.

Camp Lemonier, an 88-acre camp near Djibouti City, Djibouti, serves as the expeditionary headquarters for Combined Joint Task Force-Horn of Africa, supporting counterterrorism operations across the region. More than 1,000 servicemembers are deployed to Djibouti and the surrounding region.

There are more than 520 personnel with Combined Joint Task Force-Horn of Africa. Here&#8217;s a breakdown of that force:

&#8226; CJTF-HOA staff: about 280 drawn from all branches of the armed forces, excluding the Coast Guard

Other commands that reside on Camp Lemonier: