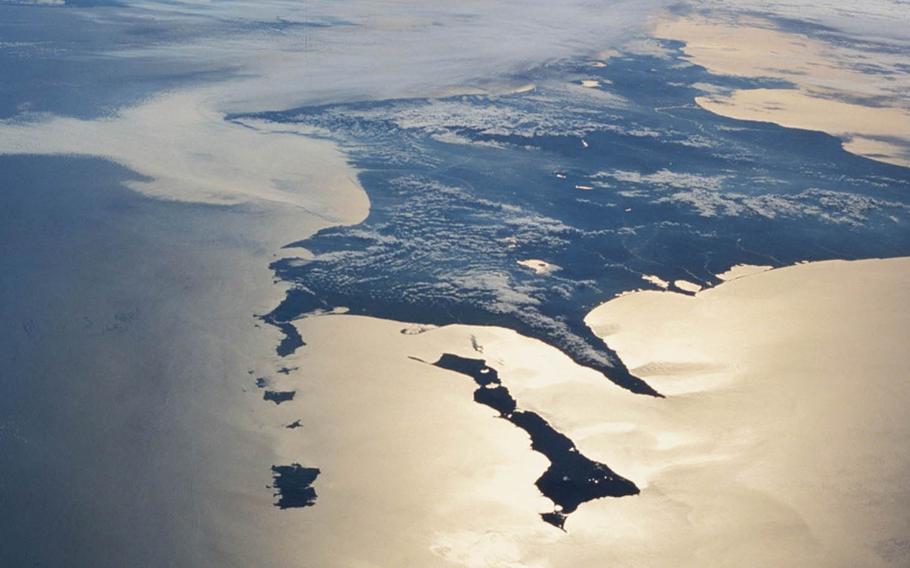 This undated NASA photo taken from space shuttle Endeavor shows the large Japanese island of Hokkaido, background, and several Russian-controlled smaller islands, including Kunashiri, front right, Shikotan, front left, and the Habomai rocks. Japanese Prime Minister Shinzo Abe is seeking the return of the islands, which were seized by Russia in the final days of World War II. (Courtesy of NASA)

Japanese Prime Minister Shinzo Abe, who met with Putin earlier this month in Vladivostok, is seeking the return of four islands — Etorofu, Kunashiri, Shikotan and the Habomai rocks — that are part of the Kuril island chain north of Hokkaido seized by Russia in the final days of World War II.

The leaders will meet again Dec. 15 in Japan’s Yamaguchi Prefecture. Chances of making progress in the 7-decade-old dispute will be helped by the fact that both leaders have been in power for years and preside over stable governments, Shinji Hyodo, director of the Regional Studies Department at the Japanese National Institute for Defense Studies, told the Foreign Press Center Japan in Tokyo recently.

“When the Japanese prime ministers were being replaced almost every year, we didn’t expect progress on this dispute,” he said, adding that Putin and Abe want to normalize relations and conclude a formal peace treaty — something the territorial dispute has prevented.

The goal is for negotiations to be done by the time Abe’s term ends in 2018, Hyodo said.

Putin planned to visit Japan in 2014, but the trip was delayed because of Russia’s annexation of Crimea and the ongoing crisis in the Ukraine.

“Russia’s relationship with the West has deteriorated,” Hyodo said. “Recent developments give us a chance to look at the [Japan-Russia] relationship from a global point of view.”

The Congressional Research Service recently reported that Putin had turned his attention to East Asia after much of the West imposed sanctions in response to his actions in Eastern Europe.

Putin’s most high-profile outreach was a summit with Chinese President Xi Jinping in May 2014, when the leaders announced dozens of economic cooperation agreements. Putin has also reached out to both Koreas in his bid to step up engagement with Northeast Asia, she said.

“If Moscow’s engagement efforts succeed, it could undermine U.S. efforts to impose sanctions on Russia and isolate Putin diplomatically for his intervention in Ukraine,” Chanlett-Avery said. “It could also create mistrust between the United States and its allies Japan and South Korea if those countries’ leaders are drawn closer to Russia.”

The territorial issue isn’t the only reason for Japan to improve things with Russia. Better relations would benefit stability in all of Northeast Asia, Hyodo said.

China’s economy has grown to four times that of Russia. It is still a weaker military power, but its strength is growing, he said.

“To stop itself being downgraded into China’s junior partner, Russia is seeking closeness with India, Vietnam and Japan,” he said. “Both Japan and Russia think it is beneficial for them to normalize the relationship in the context of Northeast Asia, including China.”

A joint declaration ratified in 1956 by the Japanese and Russian governments envisaged the return of two of the smaller islands. This should be Japan’s starting point for the negotiations with the goal of also securing the larger islands, Hyodo said.

“Let’s identify impediments to normalization and define the Russia-Japan relationship in the global context,” he said.

Putin and Abe should work out what benefit they can enjoy from strengthening the relationship, Hyodo said.

“Given the sluggish Russian economy, they have a strong appetite for economic cooperation with Japan,” he said. “Security dialogue is also important.”

Russia, concerned about China increasing its Arctic presence and eager to develop a trade route to Europe along its northern coast, is pumping up its military presence in the Kurils, planning a new naval base on Matua Island, Hyodo said.

“If Japan and Russia can reconcile their own security-related issues, it will be an important factor in the territorial negotiations,” he said.

But talks won’t be limited to Japan and Russia, Hyodo said.

“It has to include the U.S. [Japan’s most important security partner] for advancement of the discussion,” he said.