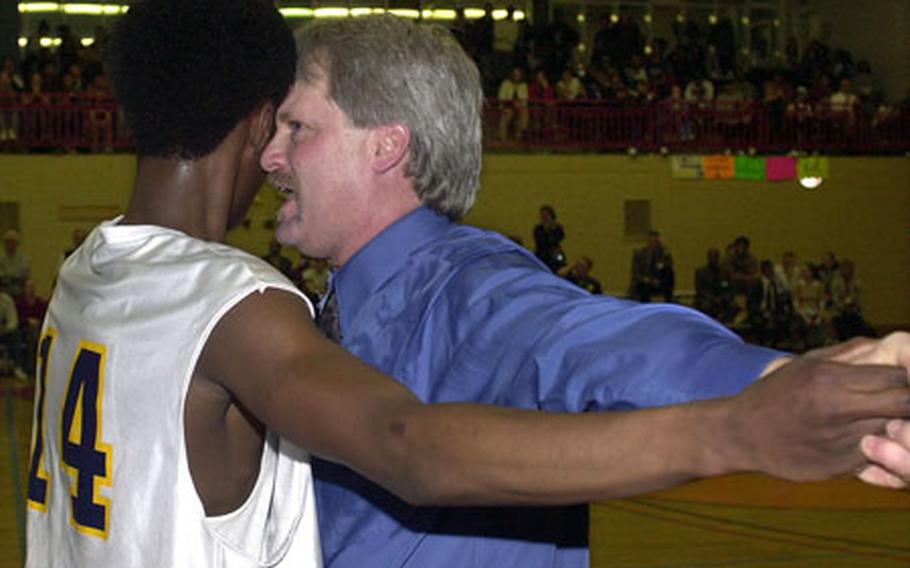 Heidelberg Lion head coach Brad Shahan congratulates one of his players during the final moments of the 2003 Division 1 basketball championship game in Mannheim, Germany. For Shahan it was the fourth title in as many years. Shahan was removed as coach this month for disciplinary reasons. (Michael Abrams / S&S)

HEIDELBERG, Germany &#8212; The Heidelberg Lions will start their quest for the European high-school boys&#8217; basketball championship Wednesday without the services of the coach who led them to five previous titles.

Brad Shahan, whose Lions won five straight European Division I championships from 2000-2004, was removed from his coaching duties Feb. 8 for actions he took on the football practice field last Aug. 22, according to Department of Defense Dependents Schools-Europe spokesman David Ruderman.

Shahan, along with school athletic director Keri Domko, had their extra-duty contracts terminated, Domko said by telephone on Sunday, for &#8220;failure to support the rules and regulations regarding corporal punishment.&#8221;

According to Domko, the corporal punishment in question was the requirement by Shahan that all players who attended football practice on Aug. 22 do 200 push-ups in increments of 20. Domko said Shahan imposed the punishment because the players had left trash on the field the day before.

Two players, who quit the team after undergoing the punishment, allegedly sought medical treatment for muscle damage they claimed they suffered from doing the push-ups, Domko said. She declined to name the complainants.

Simpson said he believed doing 200 push-ups during a two-hour practice could be rigorous enough to cause muscle damage in some people.

Domko, a substitute teacher, said she was removed for failing to supervise Shahan properly, even though she had not been informed of the school system&#8217;s rules on corporal punishment.

Moreover, Domko said, she had no power to modify Shahan&#8217;s actions on the field, despite her title as the school&#8217;s athletic director. She said an AD&#8217;s job mainly deals with paperwork and checking athletes&#8217; grades to make sure they meet eligibility requirements.

A Stars and Stripes query regarding the disciplinary actions taken against educators and rules regarding corporal punishment was not answered by deadline Tuesday.

Domko said she was stunned by her removal that came months after the fact.

In some states, it&#8217;s described as any infliction of physical pain as punishment. That means forcing students to run laps or do push-ups might, or might not, be viewed as corporal punishment.

In 1989, California&#8217;s attorney general ruled that &#8220;the prohibition against corporal punishment extends to any and all forms of willful pain infliction, &#8230; It would seem clear that willfully causing physical pain through forced exercise is prohibited in all school contexts with the exception of the pain or discomfort which is inherent in certain types of physical education, intramural or interscholastic sports programs &#8212; and then only to an extent which would be consistent with an appropriate training regime. It is the causing of pain which is prohibited &#8212; not the particular method or methods by which it is caused.&#8221;

But an order forbidding forced exercise for discipline was rescinded when &#8212; after hearing from angry coaches &#8212; the superintendent said he didn&#8217;t believe forced exercise was corporal punishment.

According to some experts, forced exercise remains a common form of discipline.

&#8220;Forced exercise is one of several unacknowledged forms of corporal punishment,&#8221; said Jordan Ryak, executive director of Parents and Teachers Against Violence in Education, in an interview published online.

&#8220;Though the practice is unequivocally condemned by physical education experts, it is widely used, even in states that ban corporal punishment,&#8221; he said.