Push is on in Japan for more participation in COLA surveys 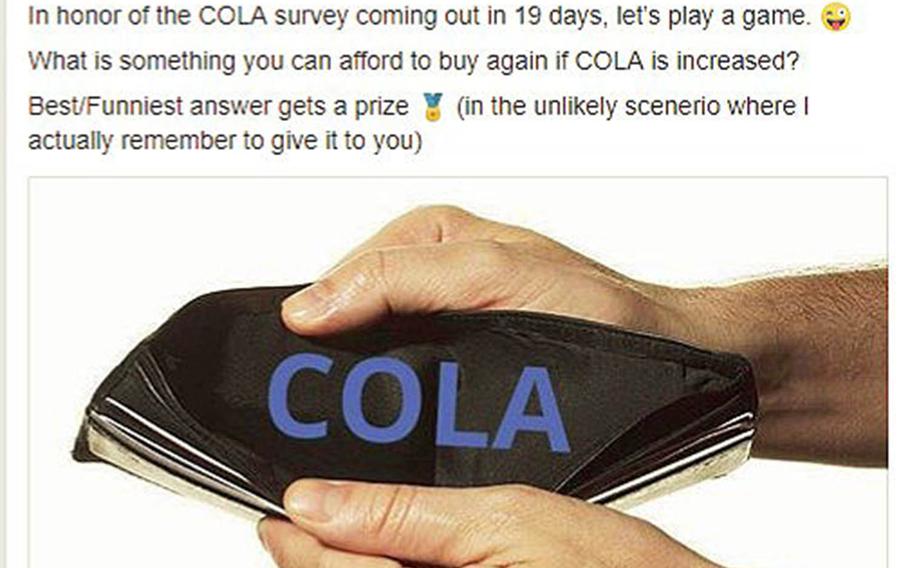 YOKOSUKA NAVAL BASE, Japan — A cost-of-living survey that’s about to do the rounds of U.S. bases in Japan could impact allowances that were slashed for servicemembers there earlier this year.

The living pattern survey, which happens every three years, asks servicemembers how and where they buy goods and services and helps set COLA rates that compensate personnel for higher prices overseas.

Personnel in Yokosuka and Yokohama will have from April 15 to May 31 to complete the survey. All other military bases in Japan will hold theirs May 1 through May 31.

In 2018, all but two U.S. bases in Japan — Naval Air Facility Atsugi and Camp Fuji — experienced COLA reductions. The largest drops came at Yokosuka, where servicemembers saw rates drop about 45 percent, and at Yokota Air Base, where they fell by about 30 percent.

To get the most accurate information to determine allowances for the next three years it’s important that as many people as possible fill out the surveys, Yokosuka spokesman Sean Kelly said.

“If you only have a small fraction of the eligible servicemembers filling out the survey, the data may not be as accurate as it needs to be,” he said.

Young troops are less likely to participate than older folks, even though they make up two-thirds of the military population, according to a 2015 RAND Corp. study.

At a Yokosuka town hall event in February, base commander Capt. Jeffrey Kim encouraged families to do the surveys together.

“All our active duty service members — or spouses, though only one survey will be accepted per active duty DoD ID number — are most strongly encouraged to complete this survey to provide the best pool of data to the Defense Travel Management Office, which administers the Overseas COLA entitlement,” Kim told Stars and Stripes Friday in an email.

The Navy is promoting the survey to Yokosuka spouses — not just servicemembers, who are the only ones technically eligible to take it, Kelly said.

“Many of the spouses probably never took the survey [in years past] because it was incumbent on sailors,” he said. “We are looking at how can we push this so the spouses who may be doing most of the shopping know when [the survey] starts, when it ends and how to take it.”

This year the Navy is making a concerted effort to get the word out with more social media posts and emails, Kelly said.

“If you have eyes, you will probably see this somewhere,” he said. “There is always going to be somebody who is going to miss it, but we are doing our best to minimize those somebodies.”

Some residents at Marine Corps Air Station Iwakuni were frustrated when they heard about a recent 14 percent COLA drop.

Rocky Rozhanskiy, a former sailor whose husband is attached to Strike Fighter Squadron 27 at Iwakuni, said her family spends about $335 on road tolls each year to shop at Costco in Hiroshima once a week.

“It’s very disappointing to hear [about the COLA reduction] considering how expensive the food is at the commissary on base,” Rozhanskiy said. “There are families here with hungry mouths to feed, and this adds to servicemembers’ decline in morale. Adding stress to an already overstressed forward-deployed force is detrimental to the Navy as a whole.”

At Yokosuka, Navy spouse Ellie Jackson posted information about the survey on the 5,500-member “Yokosuka Military Spouses” Facebook group, which she helps manage.

“We moved from Miami where the cost of living was pretty high, but Japan is considerably higher,” she said. “We rely on COLA to make up the difference.”

There’s a perception that COLA was cut at Yokosuka because of the low number of responses to the last survey, Jackson said. “Many have said they did not take the survey because it was not advertised well and they did not know when or how to participate,” she said.

Humor seems to be the best way to spread the word, said Jackson, who offered a prize last week for the funniest answer to: “What is something you can afford to buy again if COLA is increased?”

Answers ranged from “produce” to “ear plugs so I can tune out all the complaining about COLA.”

Jackson said her top post about the survey reached thousands of people.

“If I can use humor to engage with 3,000-plus people about the COLA survey, I feel like it’s my responsibility to do so,” she said.

Still, Kelly said it’s important to remember that the allowance may not increase no matter how many people do the survey. COLA rates can change based on whether prices are climbing or falling in the U.S. versus overseas locations.

“There is no guarantee that it will go up. If prices in the states have gone up, it’s potential that ours won’t go up either,” Kelly said. “But the more data you have, the more accurate the COLA information can be.”