Purchasing Wii off base could backfire 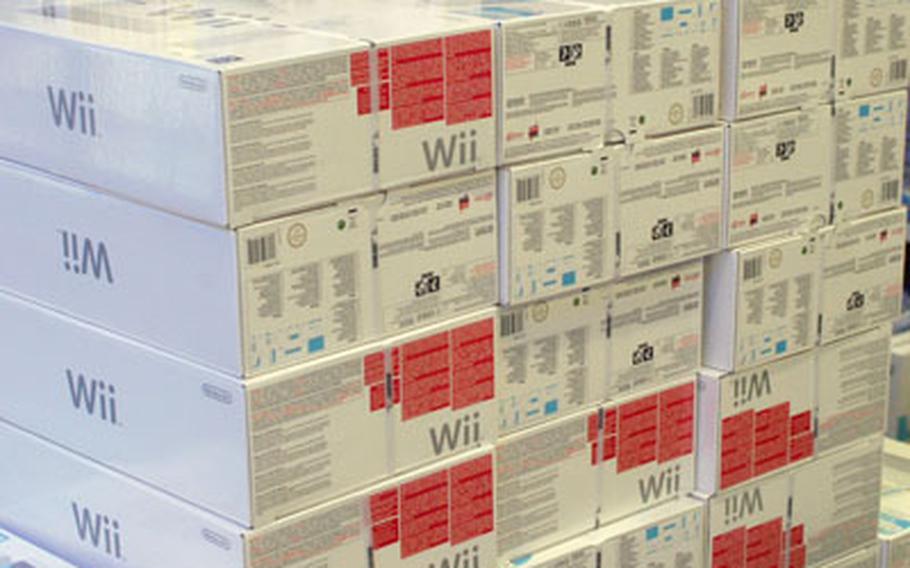 A small mountain of Nintendo Wii video game consoles dominates the video game aisles at the Saturn electronics store in Darmstadt, Germany. Similar piles of Wii consoles, which are nearly impossible to find in the United States or at military exchange stores, have been sighted across Germany. (Matt Millham / S&S)

Nintendo&#8217;s Wii is nearly impossible to find at Army and Air Force Exchange Service and Navy Exchange stores, yet one can hardly navigate an off-base electronics store in Germany without crashing into a pile of them.

With Christmas drawing near, it&#8217;s tempting to run out and plop down a little extra cash and a value added tax form at an off-base shop to keep from disappointing the kids.

But there&#8217;s something you should know about the European Wii: It might not play well with your American television.

The most difficult to overcome is the difference between U.S. and European broadcast standards. The U.S. uses an NTSC color encoding standard; most of Europe uses PAL.

Because of the difference, &#8220;Games and systems purchased for use in other countries will often not function properly in the U.S. or with made-for-U.S. products,&#8221; and vice versa, according to Nintendo&#8217;s Web site.

Anyone planning to buy and modify a European Wii so it will play U.S. games should beware. The company has issued cease-and-desist orders to mod chip sellers in Germany and demanded to know who manufactured them, according to tech gadget blog Gizmodo.

Gizmodo has even speculated that Nintendo might send out a firmware update to &#8220;brick&#8221; the modified consoles, essentially turning them into expensive paperweights.

Even though some American televisions can process both NTSC and PAL signals and work with both U.S. and European consoles, to keep Nintendo off your back you&#8217;ll have to purchase European games, which cost more.

A much-easier-to-overcome incompatibility issue noted by Nintendo&#8217;s Web site is the difference in electrical standards used by the States and Europe. This hurdle is easily cleared with a power converter, or simply by purchasing a different power supply.