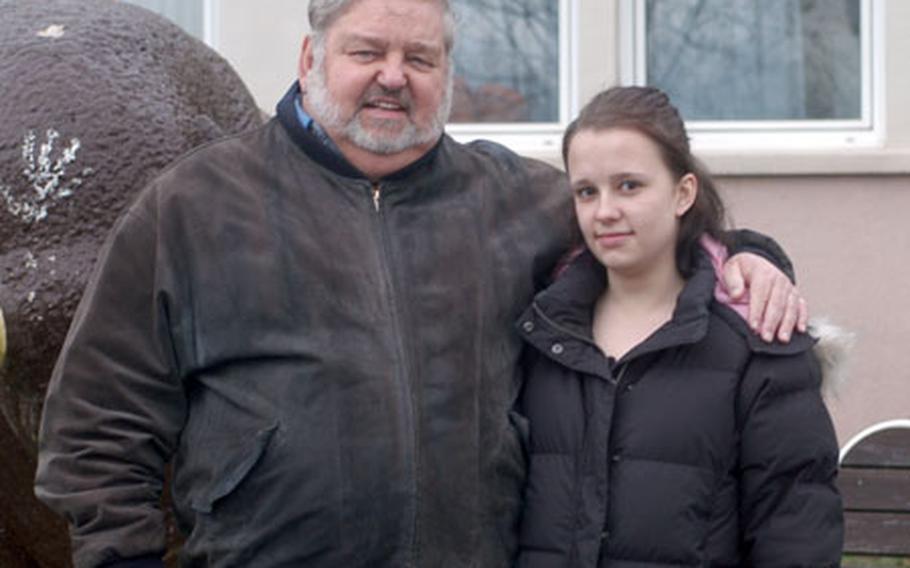 Larry Fillmore and his daughter, Megan, stand in front of Mannheim High School, where Megan was disciplined with an in-school suspension for fighting after being punched by another student. Her father says she should be able to defend herself without repercussions. (Nancy Montgomery / S&S)

MANNHEIM, Germany &#8212; She&#8217;s 3 inches shy of 5 feet tall and weighs in at 105 pounds. But when an argument with a boy more than a foot taller took a nasty turn over lunch by the shoppette, and he punched her, Megan Fillmore knew what to do.

But that was the wrong response, according to Department of Defense Dependents Schools policy. Her retaliatory punch, and the ensuing scuffle landed her, along with the boy, in an in-school suspension at Mannheim High School.

Larry Fillmore, Megan&#8217;s father, a retired sergeant first class and current Army computer security chief, said he believes it&#8217;s the policy and school that are wrong. Fillmore is outraged that Megan, 18 and a senior, was punished for practicing &#8220;self-defense&#8221; and what he says is a fundamental human right.

This is a position he&#8217;s held through the rearing of three daughters, including after he was widowed seven years ago. All of them put his teachings into practice, he said, when confronted at school. &#8220;Every one of them, and I&#8217;m very proud of that,&#8221; he said. &#8220;And in May, both of [the older ones] graduate from college. I raised the girls to take care of themselves so that I don&#8217;t have to worry about them when they go out in the world. They are to defend themselves at any time. I&#8217;m a firm believer in that.&#8221;

Fillmore asked the principal to reconsider. No dice. Then he appealed to the local school superintendent. Same answer.

&#8220;The young man started the physical portion of this fight, but Megan was also a participant,&#8221; superintendent Elizabeth Walker wrote. &#8220;This does not indicate that we are teaching students that they have to accept abuse. Our responsibility is to teach students that there are alternatives for solving disagreements.&#8221;

The disagreement began, according to Megan and several student witness statements, over Megan&#8217;s dislike of the boy&#8217;s girlfriend. Megan said she then took a call on her cell phone, and then the boy, who is apparently a junior, &#8220;punched me in the face.&#8221;

There is little disagreement about who hit first. Most student witness accounts said it was the boy, and school officials agreed.

School officials declined to be interviewed, Ruderman said. It was his understanding, he said, that Megan, though tiny, became the aggressor, even if she didn&#8217;t strike the first blow. &#8220;She proceeded to beat this kid up,&#8221; Ruderman said. &#8220;She was not just protecting herself. I understand he had some scratches the young lady didn&#8217;t have.&#8221;

Megan said she was muddy and marked when she went to report the fight to the vice principal after it ended. She said the vice principal, Joe Malloy, told her she should have put the boy in a &#8220;bear hug&#8221; to prevent his hitting her.

But Ruderman said Malloy denied having said anything about a bear hug.

Ruderman said the policy is just common sense, necessary for a safe learning environment. &#8220;If someone is picking on you, go away from them,&#8221; he said. &#8220;If you have to push somebody to get them off you, our administrators can make adjustments. This is not the Bible. It doesn&#8217;t say turn the other cheek.&#8221;

The policy is in keeping with those of many school districts across the United States. Fighting &#8220;will result in the suspension from school of all students involved,&#8221; according to a Detroit, Mich., school Web site. &#8220;Whenever a student feels threatened or thinks a fight is likely to occur, that student must report the circumstances to either his/her counselor, teacher, the Student Development Center, or the Main Office before anything happens. This is a student obligation.&#8221;