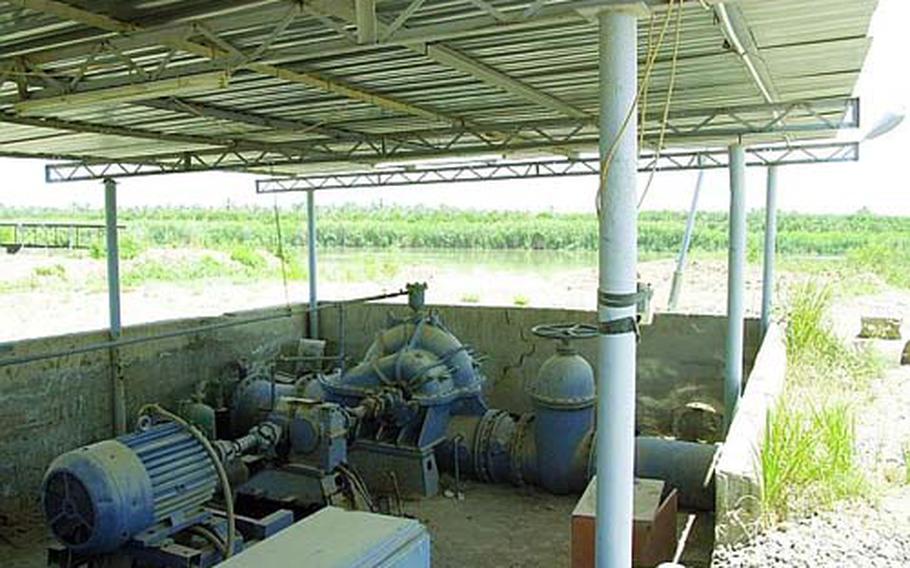 The water pumps in Rashadiyah, a farming community northeast of Baghdad, stood quiet on Monday. The power substation that feeds the pumps had shut down Monday. (Teri Weaver / S&S)

ISTAQLIL, Iraq &#8212; It&#8217;s taken Iraqi government officials eight months to bury a high-voltage power line along the two miles between a power substation to a water-pumping station on the eastern edge of the Tigris River.

The $900,000 project, paid with Iraqi government money, began late last fall with attention from multiple agencies, including the ministries of electricity, water and agriculture. It&#8217;s meant to vastly improve irrigation to 8,000 farms across 20,000 acres on land northeast of Baghdad.

Yet, as of this week, the power line still had about 50 meters to go.

The crew leader for the Ministry of Electricity has for days refused to do the final hookups, according to Capt. Derek Drouin, whose job as commander of Troop C, 1st Squadron, 7th Cavalry Regiment, 1st Cavalry Division, includes keeping tabs on the project.

The crew leader said his orders allow him to attach the cable to the pumping station. But those same orders don&#8217;t specify hookups for the three working transformers at the station.

"If I could forge it, I would," Drouin said in frustration about the missing paperwork.

For Drouin and many other U.S. troops working in Iraq, it&#8217;s a common situation. The Americans find lower-ranking Iraqi troops and workers rarely move forward without explicit instructions from those above.

For Haithem Al-Bdrane, the engineer who runs the water pumps in Rashadiyah, it&#8217;s equally frustrating. He&#8217;s offered several solutions, including running the cables above ground and rewiring his pumps so they will work off only two transformers. But he needs the expertise from the crew leader to do the final hookup.

"Why don&#8217;t you arrest him?" Haithem asked Drouin, with little humor.

On Monday, Haithem also had to deal with more than a dozen local farmers and residents who came to him to complain about the lack of water and power. Some farmers planted this spring in anticipation of the project, Drouin says.

"My orchards have been dead for six years," one farmer pleaded.

The pumps do more than irrigate crops. They also provide water to a nearby village of about 10,000 people, Drouin said. Without the pumps, they get water for drinking and cooking about every three days.

Until the crew leader gets a new letter that lists the exact number of transformers, the pumps in Rashadiyah will continue to work two out of every six hours. And that&#8217;s on a good day.

Monday was not a good day.

The substation, which feeds the power line, has problems of its own. So many people have illegally tapped power from the station that it often can&#8217;t provide power to its authorized feeders. The power demand on Monday overwhelmed the system, and the substation was turned off.

When the pumping project is completed, it&#8217;s unclear whether the power substation will produce enough electricity to sustain the water pumps.

A team of Iraqi and Army officials went to look at the substation on Wednesday. The two transformers that service the substation were installed in 1982; the Army is considering whether to replace them. The cost would be more than $1 million.