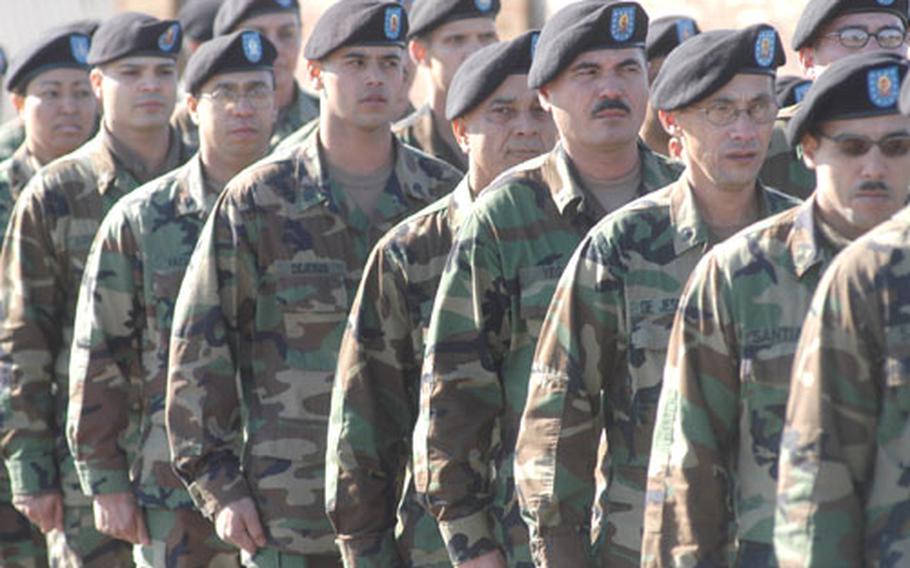 Members of Company A, 192nd Support Battalion of the Puerto Rico Army National Guard march on their way to training at RAF Lakenheath, England, on Friday. The soldiers will assist with security measures on the base for six months. (Ron Jensen / S&S)

Members of Company A, 192nd Support Battalion of the Puerto Rico Army National Guard march on their way to training at RAF Lakenheath, England, on Friday. The soldiers will assist with security measures on the base for six months. (Ron Jensen / S&S) 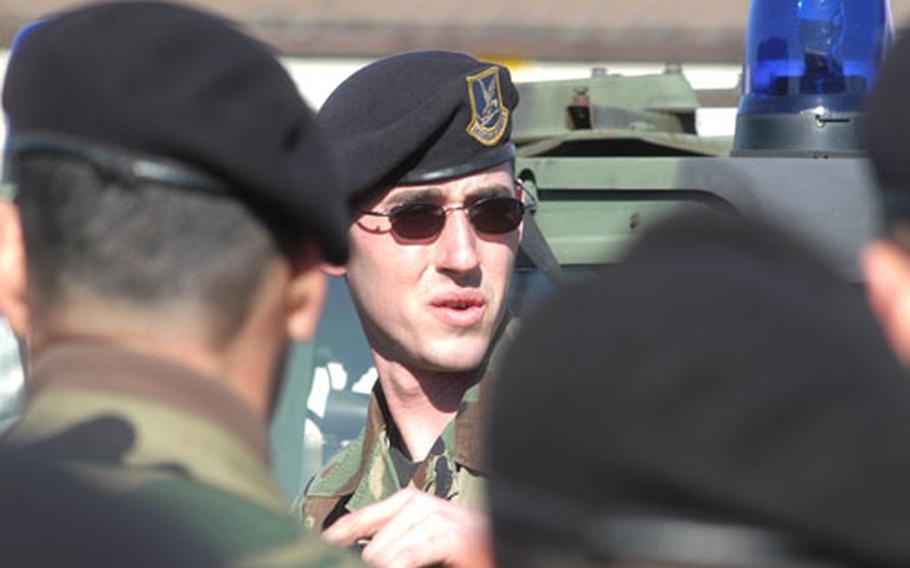 Staff Sgt. David Ellinson of the 48th Security Forces Squadron at RAF Lakenheath, England, instructs members of the Puerto Rico Army National Guard on the nuances of the Humvee on Friday. The soldiers are at the base to help with force protection efforts. (Ron Jensen / S&S)

The soldiers will be working at RAF Lakenheath, RAF Molesworth and RAF Mildenhall in England; Aviano Air Base, Italy; and Incirlik Air Base, Turkey. German soldiers already are helping provide security at air bases in Germany.

The guardsmen will be deployed for six months and replaced by troops from other Guard units.

He said the help of about 100 soldiers will give his troops time for needed training, and, more importantly, let them take some time off.

Since the Sept. 11, 2001, terrorist attacks in America, force protection measures have been stepped up at military bases worldwide. About 9,000 guardsmen in the United States are providing security help at 163 stateside bases.

Delaney said his troops have been working 65 hours per week since the attacks.

Senior Airman Roberto Perez is happy to see the Guard, and not just because he can speak Spanish with them.

The 12-hour shifts, he said, are really more like 14- or 15-hour shifts because of the need to check out weapons and get briefed before the shift, and then turn in weapons after the shift.

Capt. Adlyn Pedraza, commander of Company A, 192nd Support Battalion, which arrived at Lakenheath on Monday, said the soldiers spent one month at Fort Dix, N.J., for training in such areas as searching a car or a person, plus some weapons training.

Pedraza is a teacher when not in uniform. She said she will keep in touch with her students via e-mail and tell them what she is doing.

Pfc. Laura Feliciano, 19, a biology student back home, is on her first deployment.

She said there is no difference between protecting an Army base or an Air Force base.

Spc. Joel Dejesus, 20, is also on his first deployment, missing his job in the packing and handling department of a Procter & Gamble Co. warehouse back home.

He said the morale is high and members of the company keep one another&#8217;s spirits up.

Delaney said the 48th Fighter Wing historian told him that soldiers have not been stationed at RAF Lakenheath since 1967. Also, guardsmen have never made a home at the base.

But, he said, it is the way of the world in the aftermath of Sept. 11 and the ongoing war on terrorism, as well as the military buildup for possible war with Iraq.

His security forces have been joined on the job for the past 18 months with augmentees from other units. He said that program will remain.