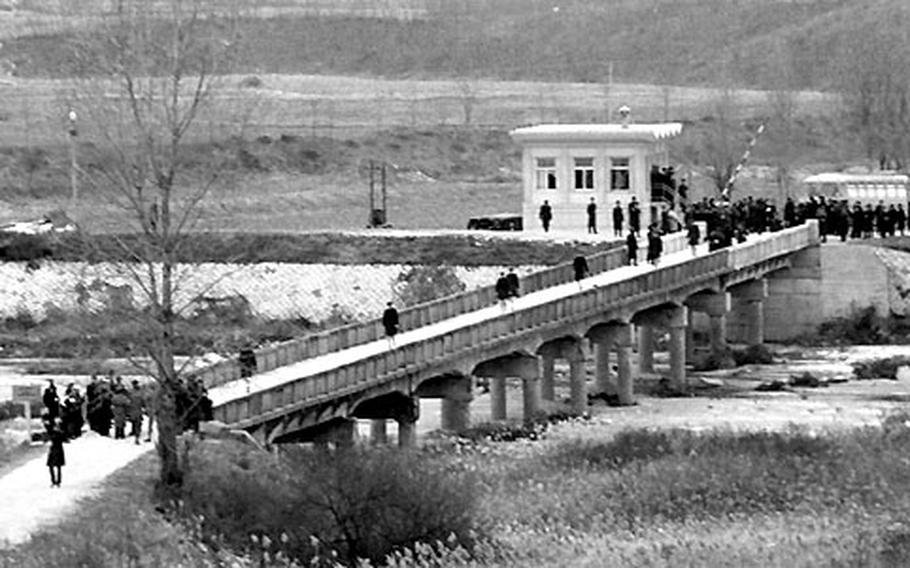 Buy Photo
USS Pueblo crew members cross the bridge from North Korea at Panmunjom after their release on December 23, 1968. (Pete Vegell/Stars and Stripes)

Buy Photo
USS Pueblo crew members cross the bridge from North Korea at Panmunjom after their release on December 23, 1968. (Pete Vegell/Stars and Stripes) 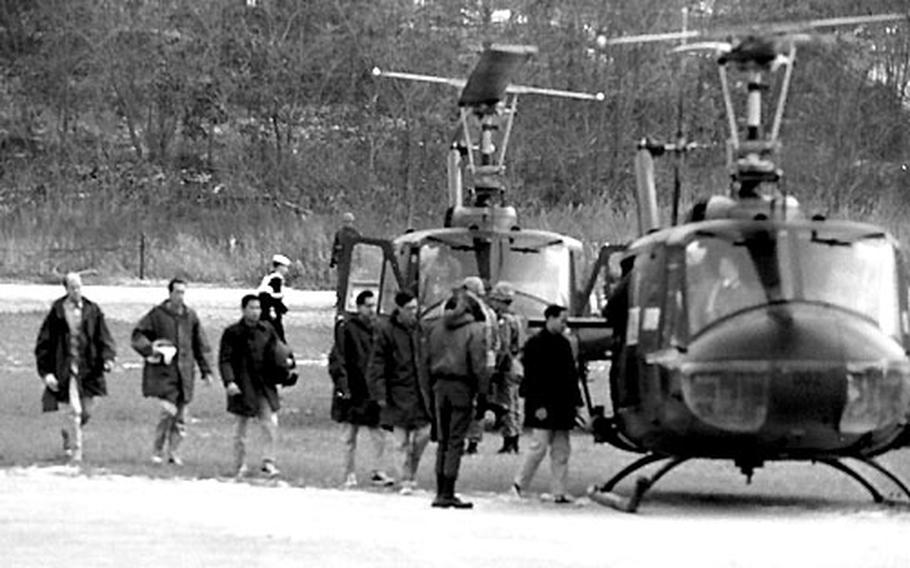 Buy Photo
Pueblo crew members board helicopters for a trip to the 121st Evac. Hospital at ASCOM following their release from North Korean captivity. (Pete Vegell/Stars and Stripes) 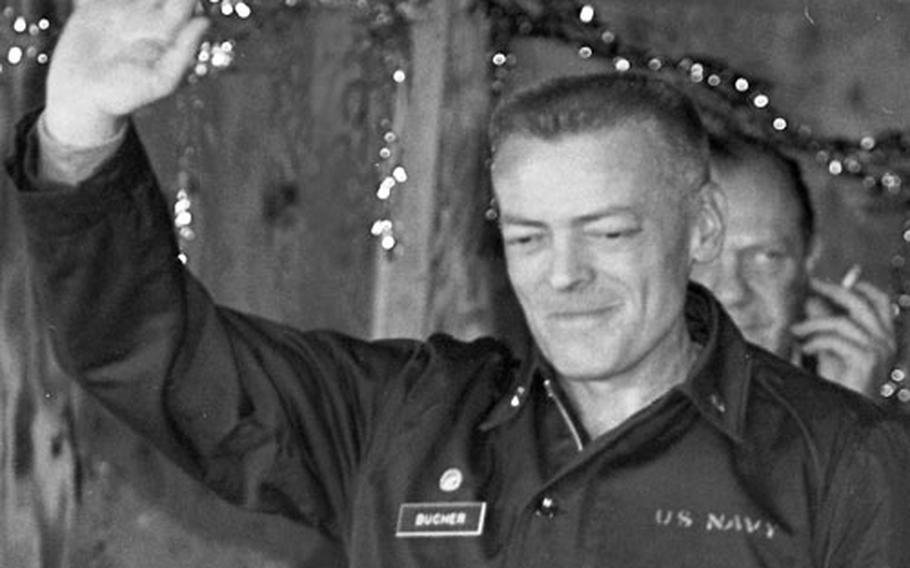 Buy Photo
A haggard-looking Cmdr. Lloyd Bucher, just released from North Korea after 11 months in captivity, waves as he arrives for a press conference in the NCO Club at the U.S. advance camp near Panmunjom. (Pete Vegell/Stars and Stripes) 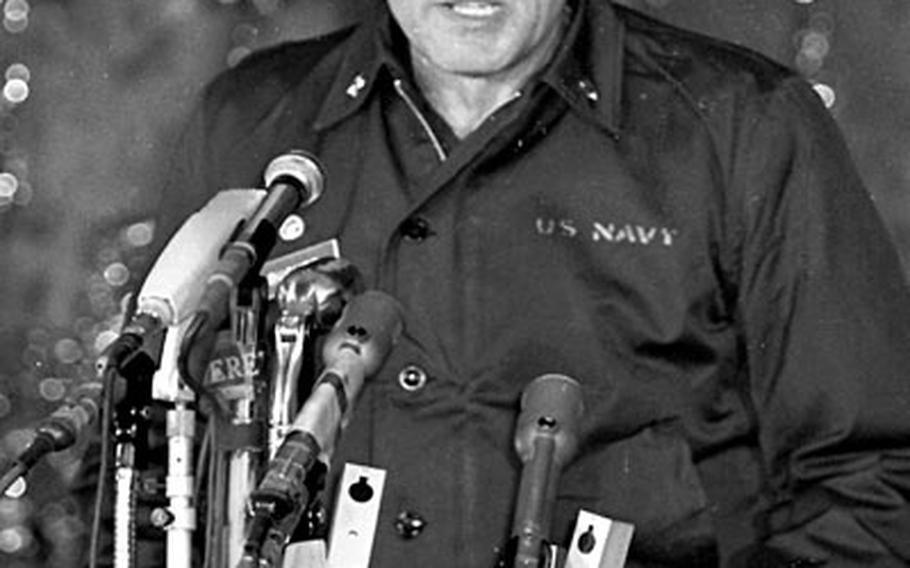 PANMUNJOM — The 82 crewmen of the USS Pueblo began their trek to freedom Monday at 11:30 a.m. Korean standard time across a small footbridge nicknamed "the bridge of no return" leading from North Korea to the truce site at Panmunjom.

Cmdr. Lloyd M. Bucher, the captain of the Pueblo who came under much fire for not putting up a struggle at the time of the seizure, was first across the bridge as a steady snow fell.

He identified the six officers, 74 enlisted men and two civilians who filed into the Panmunjom Joint Security Council after him.

The body of Seaman Duane D. Hodges, of Creswell, Ore., who was seriously injured when the ship was captured and died later, was also returned.

The formal signing of the document which handed the crew over to the U.S. was conducted at Panmunjom at 9 a.m. Monday between senior United Nations command delegate Maj. Gen. Gilbert H. Woodward and North Korean spokesman Maj. Gen. Pak Chung Kook.

In the document prepared by the North Koreans and read by Gen. Woodward said that the Pueblo had illegally intruded into North Korean territorial waters and conducted espionage activities.

Immediately after reading the statement Gen. Woodward followed up with a repudiation in which he said U.S. authorities have found "no convincing evidence that the ship at any time intruded into the territorial waters claimed by North Korea."

He explained at a press conference after the signing that he did not think it meant "a humiliation" for the U.S. government.

The U.S. never did "apologize" for the alleged intrusion as the North Koreans had insisted in countless propaganda broadcasts.

However, a U.S. Defense Department spokesman said the U.S. concurred to sign the "purported agreement" since the North Koreans had taken a firm stance in the 28 secret meetings held at Panmunjom since the seizure that "the crew would be held indefinitely if the statement was not signed."

In Woodward's repudiation he firmly asserted that "the ship was not engaged in illegal activities" and that "he could not apologize for action which he did not believe took place."

At the brief 9 a.m. meeting across the Panmunjom conference table North Korea's Gen. Pak told Woodward that "the crew was in normal condition." Woodward said in Pak's terms this means the 83 crewmen were in good health.

North Korea's delegate Gen. Pak during the meeting threatened to delay the release since he said the U.S. State Department had violated the agreement between the two nations about publicizing the time of the release. However, he later reneged and delayed the return only a half-hour.

Woodward said he was certain there was no compensation paid to the North Koreans by the U.S. for the men's freedom.

After the Pueblo crew was exchanged at Panmunjom's joint security area they were scheduled to be taken to the UNC advance camp, four miles south of the truce area.

At the advance camp they were to clean up and be given a meal in private. Then they were to be transported to the 121st evacuation hospital at ASCOM near Seoul where each crew member was to receive a physical examination.

A Defense Department spokesman said plans called for the crew members to be taken to a U.S. naval hospital in San Diego upon leaving Korea..

Their scheduled departure time from Korea is still tentative, but the spokesman said naturally everyone hoped the crew would be able to be home for Christmas.

The Pueblo was seized last January and precipitated a crisis in the U.S. which saw President Lyndon Johnson activate over 14,000 Air Force reservists and dispatch the nuclear aircraft carrier Enterprise off the coast of North Korea.

Many U.S. congressmen branded it an act of war and a speedy military buildup in South Korea was carried out.

Since then the U.S. and North Korean negotiators have been locked in verbal combat over how and when the surviving crew members would be returned. It appears that the major breakthrough took place at the 26th Pueblo meeting at Panmunjom on Dec. 17.