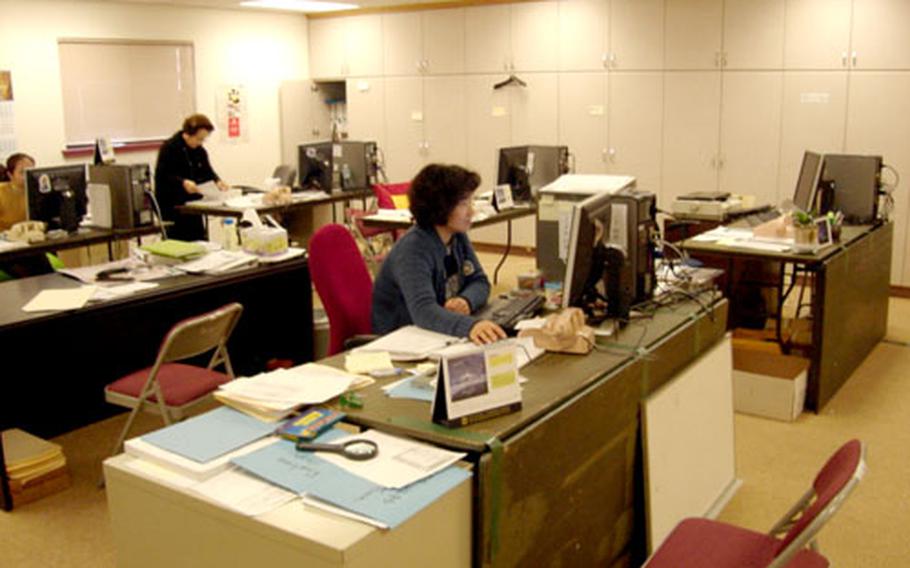 Employees of the Area IV public works department go about their work Monday in the Camp Henry offices they moved into after a Dec. 22 fire gutted their one-story office building. (James C. Hamilton / U.S. Army)

Workers will demolish what remains of fire-ravaged Building 1510 and the site eventually will be turned into a much-needed parking lot, said James C. Hamilton, public works chief with the Army&#8217;s Area IV Support Activity in Daegu.

The department has set up offices in Building 1639 at Camp Henry in the wake of the Dec. 22 fire that did an estimated $2.8 million in damage. Fire officials have said a piece of wood that touched or came too close to a building furnace caused the fire.

It was too early to know whether the department might eventually move into more permanent quarters, Hamilton said.

Meanwhile, the department continues getting its new quarters into shape.

Modular work stations and other spare furniture will be brought in next week from several other locations within Area IV and Area I, Hamilton said.

&#8220;So we hope that in the next week or maybe 10 days we can send back some of these green Army tables that most of the DPW staff are still using, and be in modular work stations that will make it a much better workplace for our employees,&#8221; he said.

A contractor is slated to demolish Building 1510 by Jan. 21, Hamilton said. The one-story structure is just inside Camp Henry&#8217;s perimeter fence on a side of post where parking is scarce.