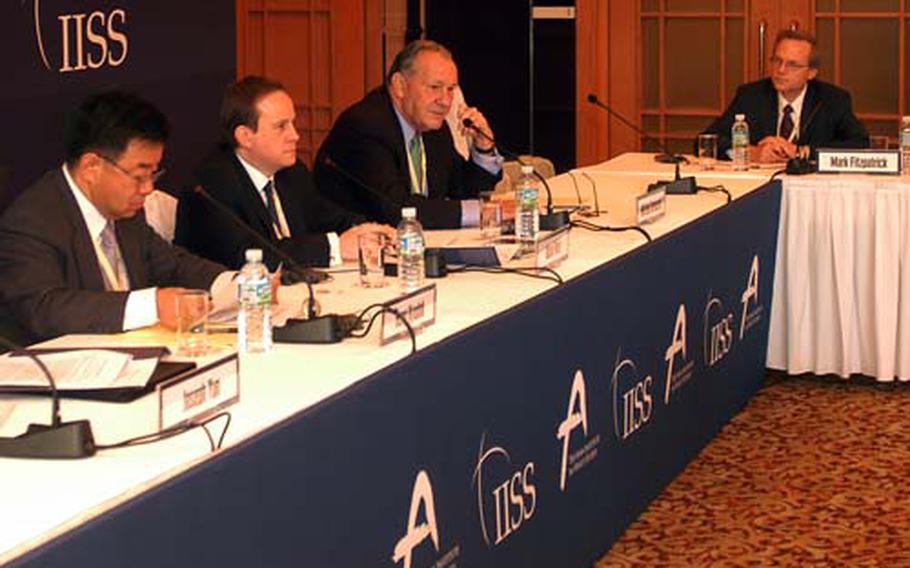 Michael Armacost, third from left, answers questions during a panel discussion on strengthening the U.S. and South Korean relationship Saturday at the Westin Chosun Hotel in Seoul. Armacost is a fellow at Stanford University&#39;s Asia-Pacific Research Center and former U.S. ambassador to Japan and the Philippines. The talk was part of a three-day conference sponsored by the International Institute of Strategic Studies and the Asian Institute of Policy Studies. (Erik Slavin / S&S)

The comments came during two sessions on U.S.-South Korean relations during the second day of the three-day Korea Forum, sponsored by the International Institute for Strategic Studies and the ASAN Institute for Policy Studies and held at the Westin Chosun Hotel.

Although older generations still broadly support the U.S. military presence in South Korea and regard the United States as a close ally, polls and protests in recent years have shown declining sentiments among younger South Koreans with less emotional connection to the Korean War.

A feeble attempt at public diplomacy "could lead to an erosion of public support and renewed call for a reduction, or even a withdrawal of all U.S. forces in Korea," said Edwin Feulner, president of the Heritage Foundation, a conservative think tank.

Lee and the next U.S. president must guide the alliance into something more than its primary mission of deterring North Korean aggression and into a broader framework of cooperation based on shared democratic values, Feulner said.

That could be difficult, regardless of whether the next president is Sen. John McCain or Sen. Barack Obama, said Michael Armacost, former U.S. ambassador to Japan and the Philippines.

Either would have to rebalance the current focus on the Middle East, re-examine an overstretched U.S. military and work with a large budget deficit, Armacost said.

McCain also would have to deal with a Democratic congressional majority, while Obama&#8217;s party would likely steer toward domestic issues as a first priority.

"Whoever is elected is going to face large constraints ... [but] I firmly believe Asia deserves a much higher priority because of its strategic importance," Armacost said.

But strategic goals can be derailed by domestic sentiment, as Lee discovered when hundreds of thousands protested plans to pass a free trade agreement with the United States over fears that U.S. beef could be tainted with bovine spongiform encephalitis, better known as mad cow disease.

"I think it will be reduced when the footprint of U.S. troops is much smaller," he said.

Despite a recent South Korean newspaper poll that showed South Koreans roughly split on their support of the U.S. military presence, Yun believes most South Koreans have a comfort level and esteem for the United States they don&#8217;t share with most other countries.

Conversely, that same feeling leads them to feel comfortable protesting U.S. beef over mad cow disease fears &#8212; despite no proof of anyone contracting it &#8212; but not Chinese milk and snack food that have actually killed people.

"Can you imagine if the Americans beat up on Koreans? There would be enormous protests," Yun said.