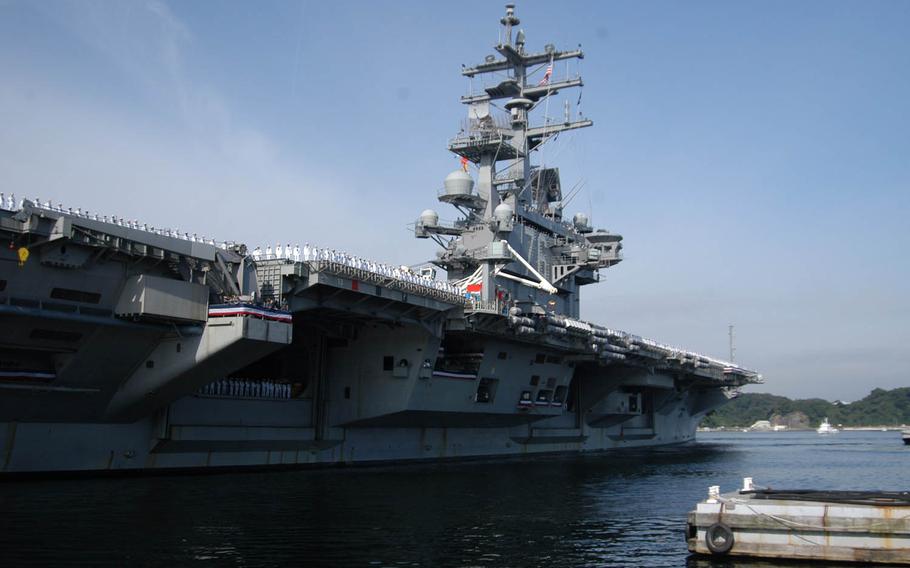 Sailors aboard the USS Ronald Reagan man the rails as the ship pulls into port Oct. 1, 2015, at Yokosuka Naval Base, Japan. The Ronald Reagan replaced the USS George Washington as the U.S. Navy's forward-deployed aircraft carrier in the Pacific. The ship will be open for public tours Monday, Oct. 12, 2015, between 10 a.m. and 3 p.m. (Tyler Hlavac/Stars and Stripes)

YOKOSUKA NAVAL BASE, Japan — The public can get up close and personal with the U.S. Navy’s only forward-deployed aircraft carrier when the USS Ronald Reagan opens for tours on Monday.

The Ronald Reagan, which arrived at Yokosuka Oct. 1, is the second newest aircraft carrier in the Navy and the centerpiece of Pacific forces. It played a key role during Operation Tomodachi, the U.S. military’s relief effort after a devastating earthquake and tsunami struck northeast Japan in 2011. The ship served as a floating refueling station for Japanese and U.S. helicopters flying relief missions to the battered coast.

The ship’s arrival sparked several small protests from groups that oppose a nuclear-powered aircraft carrier in Japan. Nuclear power remains a controversial topic in Japan after the tsunami caused a meltdown at the Fukushima Dai-ichi power plant. Fifty-nine percent of Japanese residents oppose restarting nuclear reactors that were shut down after the meltdown, and 77 percent said they would support a plan to phase out nuclear energy, according to an Asahi Shimbun poll conducted last year. Kyushu Electric Power restarted a reactor at its Sendai nuclear power plant in August.

Monday’s tours of the Ronald Reagan will take place between 10 a.m. and 3 p.m via Yokosuka’s Mikasa Park gate. Visitors must be at least 6 years old. For entry, Japanese residents must bring either a passport, basic resident registration card with photo or a driver’s license. Junior and high school students can use their student identification. Status of Forces Agreement personal need their military I.D. card. Non-Japanese, non-SOFA personnel must bring a passport or special permanent resident certificate.