Pub crawls in Britain get extra legs, thanks to change in licensing law 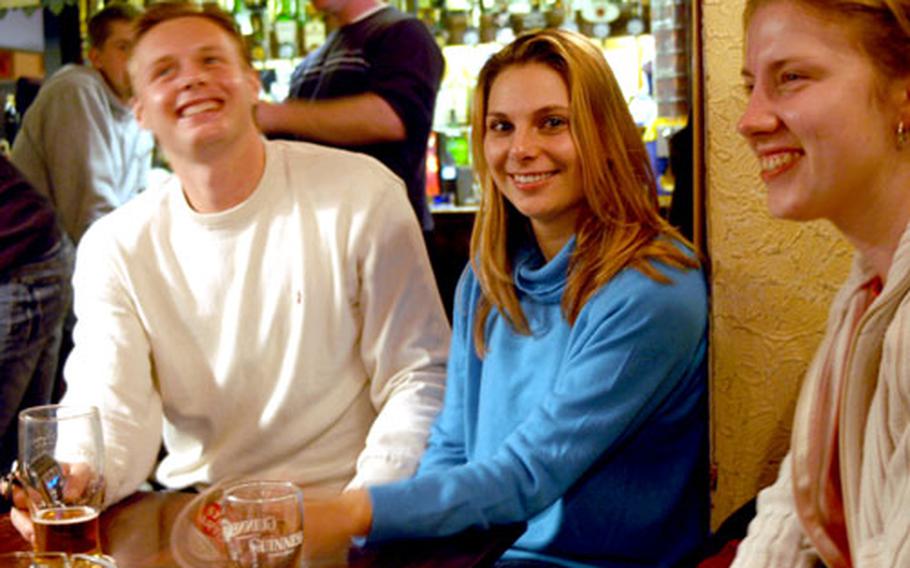 Czech Republic natives, left to right, Petr Zemek, Mirka Krockova and Petra Dudova enjoy a drink as business hours wind down at The Locomotive pub in Cambridge recently. The pub, like most in England, closed at 11 p.m., but starting Thursday it will be open until 2 a.m. on weekends. (Ben Murray / S&S)

Czech Republic natives, left to right, Petr Zemek, Mirka Krockova and Petra Dudova enjoy a drink as business hours wind down at The Locomotive pub in Cambridge recently. The pub, like most in England, closed at 11 p.m., but starting Thursday it will be open until 2 a.m. on weekends. (Ben Murray / S&S) Marvin Tillman, owner of The Chequers pub in Eriswell, pulls a pint of ale for one of his customers. (Ben Murray / S&S) 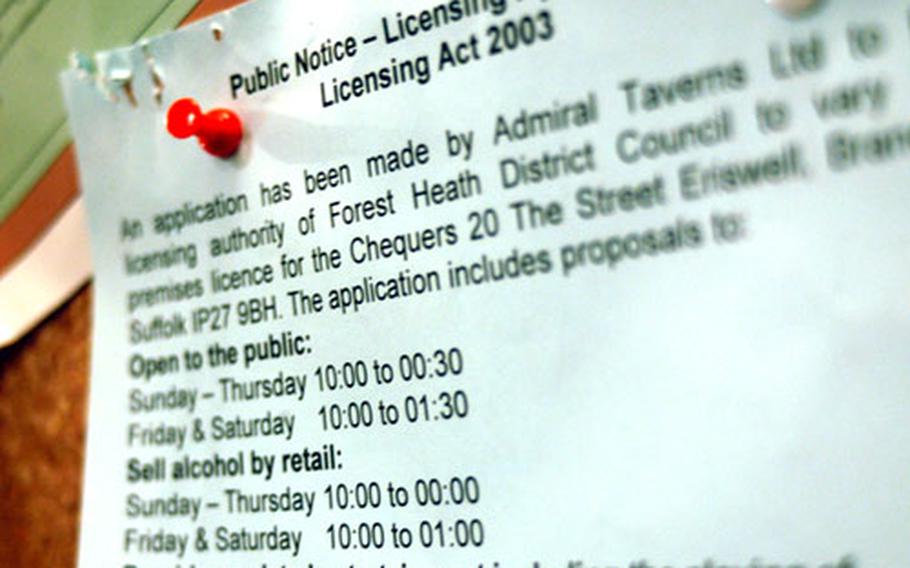 On a corkboard inside the The Chequers in Eriswell, a sign displays the once unheard-of business hours of the pub, which now will be allowed to sell drinks until midnight on weekdays and 1 a.m. Fridays and Saturdays, beginning Thursday. (Ben Murray / S&S)

The first time Claudia Sofia Lopes went out for a night on the town in England, she followed the nightlife schedule favored by many young Europeans and Americans.

The RAF Mildenhall employee sipped some early evening warm-up drinks before heading to a bar sometime after 10 p.m., ready to start a night of drinking and dancing.

But on this night, Lopes said she was surprised to find that almost every pub in England, by law, was turning out its lights by 11 p.m.

But starting Thursday, that will all begin to change, when a long-awaited set of licensing rules for bars, pubs and clubs will go into effect. The new rules will &#8212; for the first time since the 1920s &#8212; allow the vast majority of bars to stay open past 11 p.m.

Part of a larger scheme, called the Licensing Act 2003, to modernize the regulation of food, alcohol and nighttime entertainment in English bars, the new plan essentially allows pubs to stay open as long as they want, said Inspector Geoff Nunn from the Suffolk County Constabulary.

It&#8217;s a fluid structure, Nunn said, built to battle the crime and public disturbances that take place every weekend &#8212; in the minutes immediately after pubs shut down and almost every pub crawler in England is pushed out into the street.

To foil the problem, the new laws have been designed without a mandatory closing time, allowing each establishment to apply for whatever hours it wants to have. One pub might choose not to apply for extended hours, while the one next door may get approval to serve until 2 a.m., just as the club across the street gets permission to keep its doors open for the maximum allowable license, a 24-hour, nonstop permission to sell, Nunn said.

It&#8217;s a program that has sparked widespread debate across the United Kingdom as the nation makes a public push to combat binge drinking. Opponents say allowing bars to stay open later gives people more chance to booze it up.

But Nunn said the point of the relaxed hours is to take the pressure off people to slam down their entire night&#8217;s intake before the 11 o&#8217;clock bell rings, and to dissipate the crowds moving in and out of pubs.

The revamped hours also create a new nighttime social structure that could cause upheaval for many in the industry, said Marvin Tillman, a former nightclub security manager and owner of Chequers Pub in Eriswell, near RAF Lakenheath.

&#8220;It&#8217;s a big issue because it turns everything on its head,&#8221; Tillman said. Nightclubs used to enjoy the luxury of a monopoly on post-11 p.m. entertainment, allowing them to charge heavy cover fees and prices for drinks, he said.

Airmen in the United Kingdom reacted favorably to the idea of longer pub hours.

Joanne Rainey, 20, said the early curfew often made going off base for drinks and entertainment seem useless.

Others agreed that, while English citizens&#8217; habits may change substantially with the new laws, many airmen will likely stick to their ways simply because they can&#8217;t afford to be out for more hours &#8212; the pound is just too heavy against the dollar.

A history of alcohol regulations in England:

13th century: First regulations on the sale of alcoholic drinks are established by individual communities.

1886: Sale of alcohol banned to children younger than 13.

Source: Department for Culture Media and Sport, 2001 government report &#8220;Time for Reform: proposals for the modernization of our licensing,&#8221; Appendix 1.