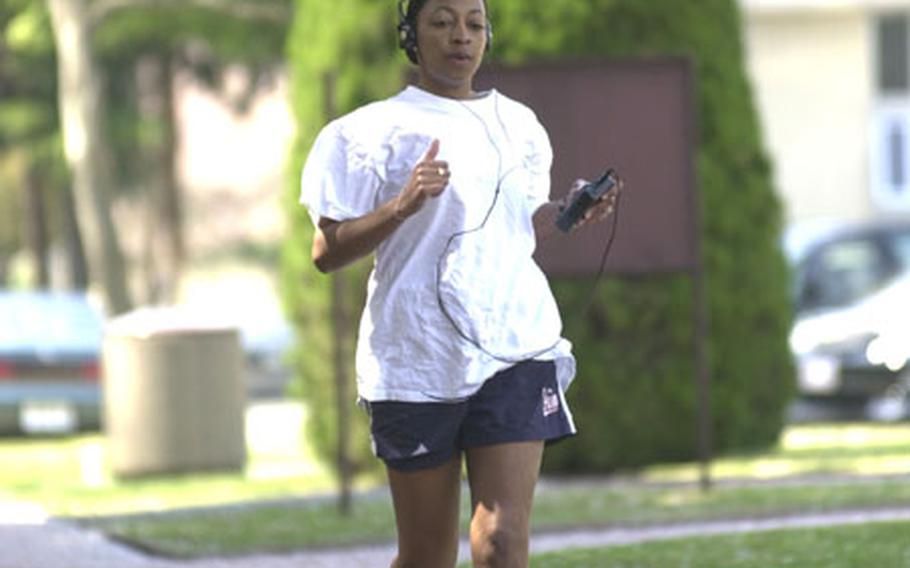 Tech. Sgt. Jennifer Shelton of the Air Force Office of Special Investigation stays in shape by running the track by the main gym at Yokota Air Base. (Jim Schulz / S&S)

Tech. Sgt. Jennifer Shelton of the Air Force Office of Special Investigation stays in shape by running the track by the main gym at Yokota Air Base. (Jim Schulz / S&S) 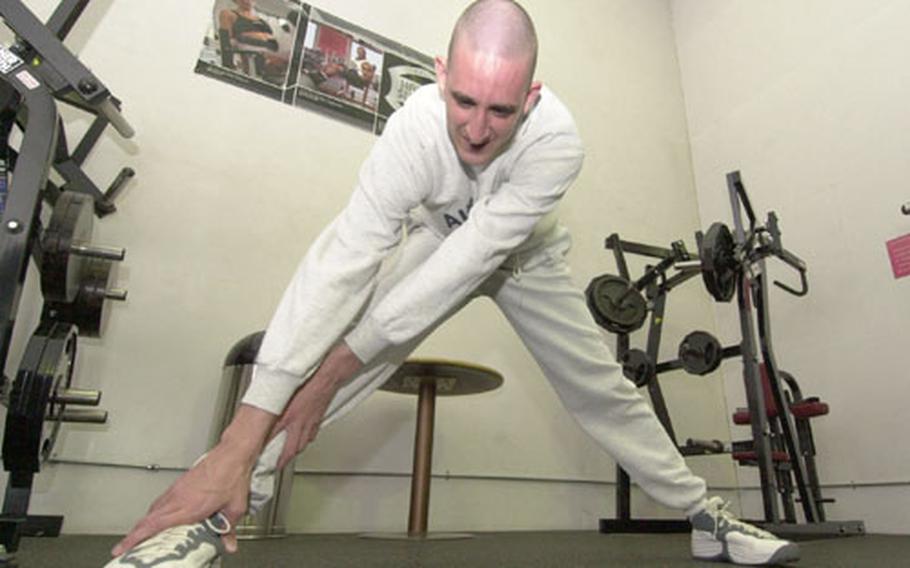 Senior Airman Joshua Fisher of the 374th Operation Support Squadron stretches his hamstrings before he begins his cardio workout at Yokota Air Base on Tuesday. (Jim Schulz / S&S)

He blames the injury on doing too much too soon &#8212; joining his unit&#8217;s new routine in the morning and playing basketball later that day. Two months later, the 27-year-old is just starting to exercise again.

Since the Air Force launched a new physical training program Jan. 1, airmen across the Pacific have reported an increase in injuries &#8212; up to 100 percent more injuries at some bases, officials say, although they were unable to provide injury statistics.

&#8220;With so many people increasing their fitness regimen, you&#8217;re bound to see more injuries,&#8221; said Joel Richardson, exercise physiologist and fitness program manager at Hickam Air Force Base in Hawaii. &#8220;Mostly it&#8217;s, perhaps, a little too much enthusiasm.&#8221;

Air Force officials expected a rise in injuries, Richardson said. Some say the aches and pains show the new program is working and expect injury rates to continue, although they hope with lower numbers.

Air Force Chief of Staff Gen. John Jumper said too many injuries had pulled airmen out of the theater. The Air Force, he said, wasn&#8217;t ready &#8212; and it was a result of poor fitness.

&#8220;The amount of energy we devote to our fitness programs is not consistent with the growing demands of our warrior culture. It&#8217;s time to change that,&#8221; Jumper said in the fall issue of Deployment Quarterly, a Department of Defense magazine.

The Air Force implemented mandatory weekly training and returned to an annual fitness test based on running, sit-ups, push-ups and body composition.

Officials said the service had been using a cycle ergometry test &#8212; testing fitness on a stationary bicycle &#8212; for about a decade because several airmen suffered heart attacks and other injuries during previous annual running tests.

This time, to prevent injuries, the service decreed that airmen wouldn&#8217;t be in charge of their own fitness. Led by unit fitness managers and PT leaders, airmen spend a few hours a week training not only to pass the annual tests but stay in general good shape.

Betty-Anne Mauger, a spokeswoman for the Air Force Surgeon General at Bolling Air Force Base, Va., said the same regulation that created the fitness program requirement specifies that such programs must be developed with the assistance of a qualified fitness professional.

&#8220;There are a lot of words in place (in the requirement) to make sure everyone does this smartly and doesn&#8217;t go gung-ho,&#8221; Mauger said in a Thursday telephone interview.

Unit commanders &#8212; or whomever they designate to devise a fitness program &#8212; must seek assistance from a &#8220;fitness program manager,&#8221; an exercise physiologist who staffs the service&#8217;s fitness centers, Mauger said.

According to Air Force Instruction 10-248, the fitness program mandate that went into effect on Jan. 1, the fitness manager &#8220;is responsible for providing guidance and approval of group PT programs, and to monitor their safety and effectiveness,&#8221; Mauger said.

With third parties now responsible for airmen&#8217;s fitness, some airmen may find themselves pushed harder than they&#8217;re ready for, trainers said.

Lt. Col. Gale Skousen, chief of medical services for the 36th Medical Group at Andersen, said that is the new program&#8217;s limitation.

And airmen who had been exercising on their own now must work with a group, costing them the freedom they&#8217;re accustomed to.

&#8220;There&#8217;s plenty of people who have been frustrated that their regular exercise regimen has been shattered,&#8221; Skousen said.

Base fitness personnel have worked to teach unit fitness leaders how to deal with all abilities and body types and how to help people develop, not burn out.

&#8220;People do need to be in better shape and in the long run, the benefits of good health far outweigh a few aches and pains,&#8221; said Capt. Kelly VandenBos, physical therapist at Osan Air Base, South Korea. &#8220;On the other side of that, the majority of the injuries we are seeing could easily be prevented with proper training.&#8221;

They&#8217;re taught to vary the routines and intensity, and to prevent injuries.

&#8220;That was my problem. It wasn&#8217;t the run, it was the actual running on the uneven roads,&#8221; said Senior Airman Erik Williams, a satellite communications operator with the 607th Air and Space Communications Squadron.

Although many injuries are related to running, such as shin splints and sprained ankles, many stem from sports such as basketball and even extreme Frisbee. Anything new can cause an injury.

Those injured have come from all ages and fitness levels. Some have been commanders and first sergeants, officials said.

After two months on the sidelines, Downey from Misawa is ready to get back to the grind. He realized enthusiasm for good health is a good thing, as long as airmen don&#8217;t push too hard.

Officials at Pacific air bases have noticed an increase in injuries since the service&#8217;s new physical training program was implemented Jan. 1.

Most injuries &#8212; all minor &#8212; stemmed from working unused or underused muscles. Even people in shape can be injured if trying a new sport or working out without proper preparation, officials said.

Most bases offer running shoe clinics, flexibility and stretching classes, and other wellness and exercise programs to help exercisers get started safely. Check with base Health and Wellness Centers for details.

Officials said you should start with a baseline assessment to determine where you are and where you want to be.

Here are tips to avoid the injuries seen so far from Health and Wellness officials at local air bases.

The key is wearing running shoes, not court or walking shoes, to run, he said.

&#8226; Warm up: It&#8217;s important to warm up and stretch before activity. But don&#8217;t stretch cold tendons, said Capt. Marc Bernson, health promotion manager for the 36th medical group at Andersen Air Base, Guam. A light warm-up followed by stretching is best. End workouts with a thorough stretch as well. Also, eat something before early- morning workouts for energy.

&#8226; Intensity and duration: Build up by 10 percent. If you start with 30 minutes of activity, add three minutes the next time. Doing more can risk injury. The same for weights, repetitions or anything. Add small increments to improve fitness, said Danielle Knutson, fitness program manager for the Health and Wellness Center at Andersen.

Also, vary routines. Run a long, slow run one day and a shorter one with intervals or bursts of faster runs the next. Change activities to work different muscles and muscle groups.

&#8226; Aches and pains: The adage &#8220;no pain, no gain&#8221; holds true to some degree, said Lt. Col. Gale Skousen, chief of medical staff at Andersen Air Base. But if muscles are very sore, said Knutson, ice them for a few days, keep pressure on the area to reduce swelling and keep it elevated as much as possible.