Psychologist: Headway made on treatments for PTSD 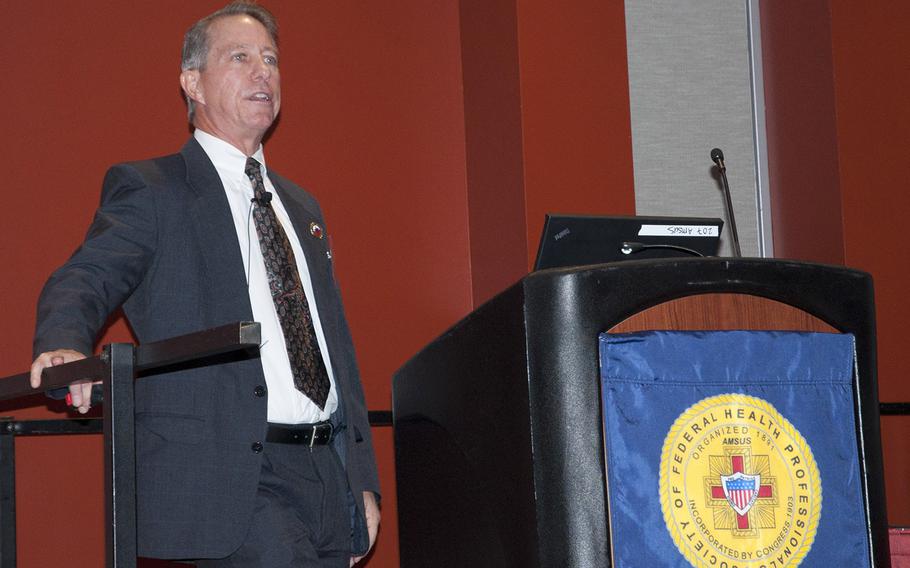 Clinical psychologist, Dr. Alan Peterson, a professor at the University of Texas Health Science Center at San Antonio and a research scientist with the South Texas Veterans Health Care System, talks about the effects of the blast at a federal health conference in San Antonio on Dec. 2. (Dianna Cahn/Stars and Stripes)

Before he launched into his lecture on the long-term consequences of “the blast,” Alan Peterson, a clinical psychologist, took a moment to pay tribute to his subjects — and to get his audience’s attention.

“This time of year, keep in mind, we have a lot of people who are deployed,” said Peterson, who is the behavioral medicine chief at the medical school of the University of Texas Health Science Center at San Antonio. “For our troops who are deployed, Merry Christmas, Happy Hanukkah and …”

Beside him, images flashed across a screen: ripped, ragged limbs, pools of blood, furniture — and people — thrown like rag dolls.

He paused. The screen stopped on an image of the tent, giant holes torn through its walls and roof in jagged, violent angles. Peterson turned to the room full of medical colleagues.

“That’s the way that blast occurs, right?” he said. “You are at a rock concert, in Paris, you are having a good time, the next thing you know it is mass, mass chaos.”

The IED, or improvised explosive device, is considered the number one culprit for battle wounds in the Iraq and Afghanistan wars. It evolved into the go-to weapon for enemies of U.S. forces as they patrolled the streets trying to reach out to people. Nearly 80 percent of combat injuries to U.S. forces in those conflicts were from blasts — the highest proportion in the history of large-scale conflict, Peterson said.

For U.S. forces, that has meant myriad complex injuries ranging from burns and amputations to musculoskeletal, skin, genital, organ and brain injuries, as well as psychological consequences that can last decades.

But the proliferation of the blast also has meant a robust focus on protection and treatment. Forces are now equipped with better body armor, bomb detectors, robots and protective vehicles, along with more focused training and human intelligence. Far more survive.

And while some injuries — to the brain in particular — are still confounding scientists, doctors are making tremendous headway in treating not only the physical wounds of these wars, but also another signature injury: post-traumatic stress disorder.

PTSD and traumatic brain injury often overlap, said Peterson, who is part of a south Texas consortium studying the treatments of PTSD. Often, those suffering from TBI have PTSD as well. Many of the symptoms are similar — trouble sleeping, memory problems, poor concentration, depression, anxiety and irritability.

But there are differences as well. TBI patients struggle with headaches, dizziness, fatigue and light and noise intolerance, while symptoms unique to PTSD involve re-experiencing the trauma, avoiding reminders or triggers, negative changes in thought processes and moods and heightened excitement.

The symptoms compound each other, Peterson said. A PTSD sufferer stops going outside, doing his or her favorite things for fear that something will trigger symptoms. That leads to isolation and depression, he said.

Military forces can train for the horrors of war and to be resilient, Peterson said. But the trauma comes when the unexpected happens. So while special operations forces might be the most resilient and prepared, they are also the most exposed and at risk of experiencing things that one could not have imagined in advance.

“Things occur that no human being could possibly anticipate would occur,” he said. “Oftentimes, these are the things people struggle with.”

The cost for these injuries is also staggering, Peterson said. The costs for disability payments alone for a servicemember claiming PTSD can tally $500,000 during a lifetime, he said. That’s not including medical, unemployment and other associated costs.

Though many treatments might work, the departments of Defense and Veterans Affairs have sanctioned two of them for pervasive use: prolonged exposure therapy, in which a patient reviews the traumatic experience again and again until the event becomes historical and stops setting off triggers, and cognitive processing therapy, in which the patient reviews symptoms and accounts of the trauma and works to modify thoughts and beliefs related to it — more of an adaptation of perspective.

A 2012 study found 80 percent of civilians treated with these therapies were basically cured, and remained that way five years later.

But doctors have yet to conclude that it works as well on military veterans. Part of the problem, Peterson said, is that active-duty servicemembers don’t manage to show up for sessions during a 12-to-15-week period. Doctors are now trying compressed treatments, in which the sessions are daily for two weeks, rather than spread out over a longer period.

In Israel, a 2011 study found early intervention following a trauma can help prevent the full onset of PTSD. The study divided nearly 300 participants into five groups receiving exposure therapy, cognitive therapy, medication, one placebo and one on a wait list. At the end of five months, 20 percent of the two therapy groups developed full-blown PTSD while 60 percent of the other three groups developed the symptoms.

More than 25 PTSD research studies are being conducted by the consortium at the UT Health Science Center, where Peterson is one of more than 100 investigators. The group, called STRONG STAR — the South Texas Research Organizational Network Guiding Studies on Trauma and Resilience — is the largest of its kind in the world, involving more than 30 collaborating institutions, including the VA’s National Center for PTSD.

Several of the studies are being conducted by the doctors who developed exposure and cognitive therapies, Peterson said.

One being conducted at Fort Hood, Texas divided 370 people into four groups, comparing standard prolonged exposure therapy with the same therapy compressed into two weeks. A third group that did standard therapy, known as present center therapy, and a fourth group received minimal contact. Those results are not out yet.

Ultimately, he said, treating PTSD is oddly similar to treating cancer. There are all these different treatments, Peterson said. If one doesn’t work, keep trying until you find one that does.