An Afghani boy seems to be thinking, "Are you sure this is a boy&#39;s sweater?" as Sgt. Olga Roemer, a linguist with the Provincial Resconstruction Team, outfits him with donated apparel. (Terry Boyd / S&S)

An Afghani boy seems to be thinking, "Are you sure this is a boy&#39;s sweater?" as Sgt. Olga Roemer, a linguist with the Provincial Resconstruction Team, outfits him with donated apparel. (Terry Boyd / S&S) 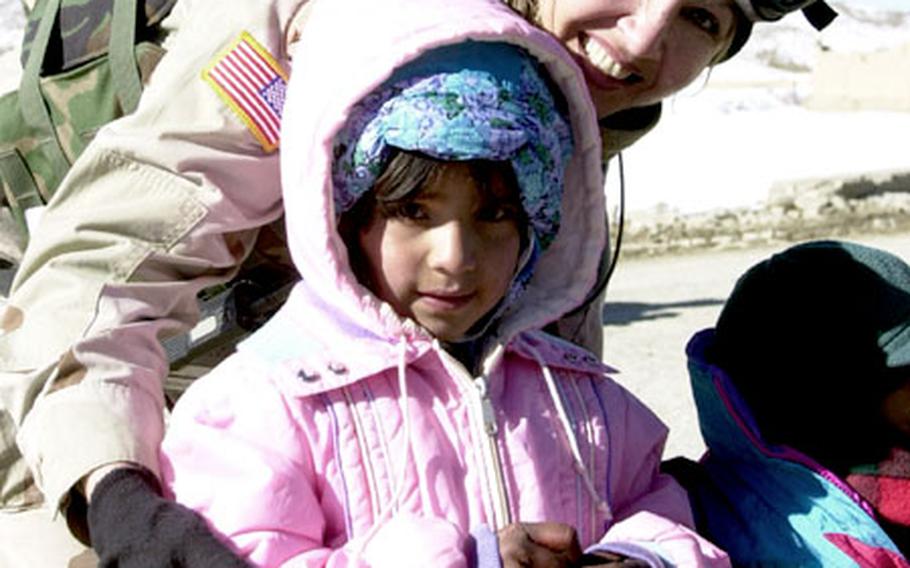 Winning the confidence of young people is a top priority for Provincial Reconstruction Team members. Sgt. Olga Roemer decks out a girl in winter clothing at a remote mountain village in Afghanistan. (Terry Boyd / S&S) Kids wave and smile at PRT convoys even in the town of Gardez, Afghanistan, where insurgents regularly attack coalition forces and aid agencies. (Terry Boyd / S&S) 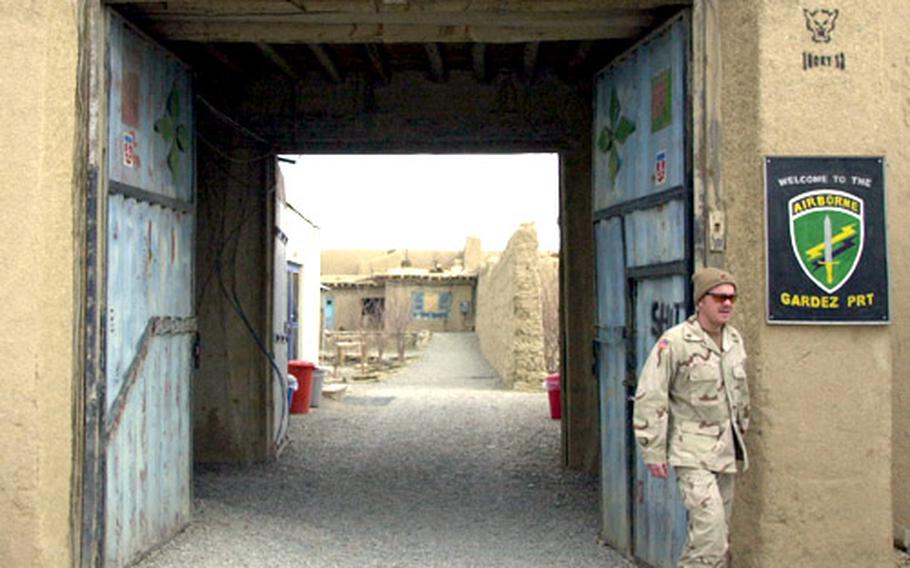 Staff Sgt. Thomas Mitchell, a medic with the Provincial Resconstruction Team, strolls out of the old mud fort the PRT uses as its base at Firebase Gardeyz, Afghanistan. (Terry Boyd / S&S)

GARDEZ, Afghanistan &#8212; In a war fought mostly by secret warriors from Special Forces units, Provincial Reconstruction Teams are the friendly public face of the U.S. Special Operations Command in Afghanistan.

An expanding effort to bring stability to Afghanistan&#8217;s wild, impoverished regions is one piece of a two-part strategy to defeat the bad guys, said reconstruction team soldiers, officers and civilians in remote Gardez.

If the PRT mission of extending security outside Kabul fails, so will the military mission, said Lt. Col. Dan Breckel, Gardez PRT commander with the Oregon-based 364th Civil Affairs Brigade.

&#8220;Security and prosperity go hand and hand,&#8221; Breckel said. Soldiers can chase Taliban and al-Qaida out of the surrounding Paktia province, he said, but if the central government can&#8217;t prove its value to locals, they&#8217;ll welcome them back.

If reconstruction teams fail to extend the Afghan government&#8217;s authority from Kabul to the provinces, &#8220;there is no Plan B,&#8221; Breckel said.

Gardez was the first of six PRTs, said Col. David Bennett, Civil Affairs spokesman in Afghanistan. A year in, the Gardez team has built $2.5 million worth of projects including six schools, said Maj. Brad Domby, an engineer assigned to the PRT.

Combat-at-arms soldiers often deride civil affairs efforts as window dressing, but Breckel stresses that his mission is a long way from handing out soccer balls.

Though this is the oldest PRT site, Gardez &#8212; 31 miles from the Pakistani border &#8212; is still a war zone. Chinook helicopters fly in from Bagram, unloading grim, M-4 toting CIA operatives and jovial Special Forces soldiers with their longer hair and beards.

Down the hill is the reconstruction team&#8217;s fort, basically a warren of billets, a dining facility and a tactical operations center inside mud walls.

If locals ask the local leader for irrigation, and they get it courtesy of the nongovernmental organizations, known as NGOs, or the U.S. Army, it makes the fledgling government look responsive, said Hank Nichols, U.S. Agency for International Development field program officer at Gardez. &#8220;Before that, how did they know they had a government?&#8221;

Reconstruction team officials make certain that locals know the government in Kabul and its friend the U.S. military can make real improvements in their lives: roads, electricity, schools, clinics, water.

Army officials plan to turn over reconstruction operations to the United Nations, coalition partners and the local governments, &#8220;and the U.S. presence goes away,&#8221; Breckel said. Before that can happen, the PRTs have to go to areas too dangerous for aid groups.

Civil affairs operations ceased in the volatile town of Skhin after attacks on the firebase. In the sprawling grit of Gardez, insurgents set off bombs four consecutive days last week. A Taliban commander told Reuters the bombing that killed 16 people in Kandahar was a botched attempt to destroy the reconstruction team there.

Fundamentally, there are simply too few personnel to handle the mission of trying to modernize the lives of people essentially living in the 17th century. Yet, U.S. commanders announced recently that reconstruction teams would expand in an effort to provide security in southern and eastern border regions where Taliban and al-Qaida attacks are increasing.

Plans call for having teams in all 32 of Afghanistan&#8217;s provinces, according to Gardez reconstruction team officials.

&#8220;Lieutenant General Barno wants us to push these people out, and that&#8217;s how we&#8217;re going to win the war,&#8221; leaving Afghanistan a moderate Islamic republic and western ally, Breckel said.

But expansion is proving problematic.

When Breckel&#8217;s reservists took over at Gardez three weeks ago, they found they were going to have one, 25-person team for their huge area, down from two teams the previous rotation. There are only 4,500 people in civil affairs, and 90 percent are reservists, Bennett said. All are either coming back from deployments, deployed or getting ready to deploy, he said.

Still, team members soldier on at Gardez, and clearly there is passion for the job, somewhat tempered by the reality of myriad missions &#8212; from security to voter registration.

Domby, the reconstruction team engineer, worked on almost 50 projects during his deployment. He left last week. A reservist from Texas, he said he found the work so fulfilling that he plans to come back on active duty and return to Afghanistan.

The PRT effort hinges on &#8220;getting to the kids,&#8221; said Staff Sgt. Kirk Hill, a medic from the 321st Civil Affairs Brigade with a degree in human services. When insurgents planted mines in culverts outside Firebase Gardez, local children came to the base and led soldiers to the mines, said Hill and Domby.

The reconstruction team effort will work, Hill said, but the Gardez team is up against roving bands of fundamentalist preachers who take over local mosques and spew Taliban rhetoric.

One sign of success is that al-Qaida is actually copying reconstruction teams, setting up its own aid operation in the town of Skhin.

Moreover, he said, there can be no stability until the border with Pakistan is sealed, stopping the influx of Taliban and al-Qaida.