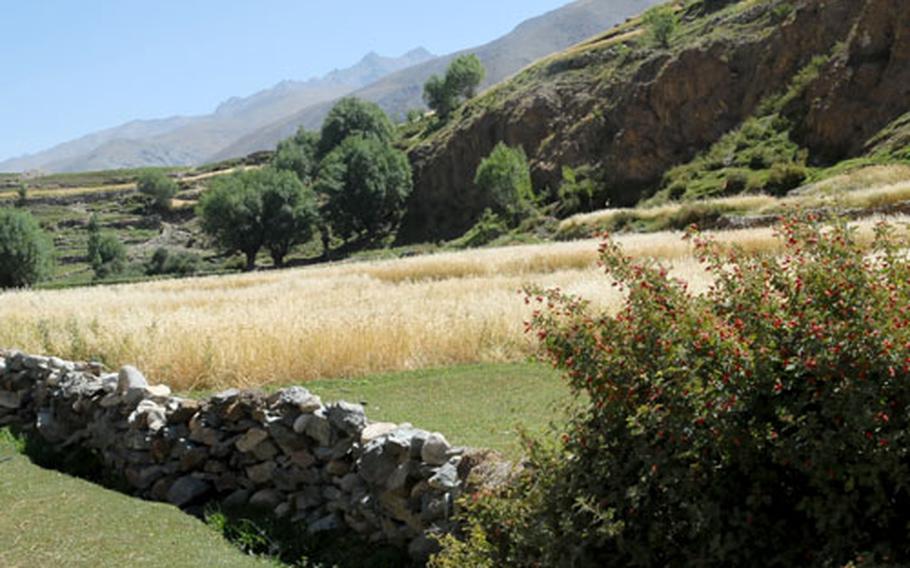 With views like this, deep snows in the winter and a lively river, U.S. troops serving in the Panjshir Valley see considerable potential for the development of a tourist economy. (Michael Gisick / S&S)

With views like this, deep snows in the winter and a lively river, U.S. troops serving in the Panjshir Valley see considerable potential for the development of a tourist economy. (Michael Gisick / S&S) 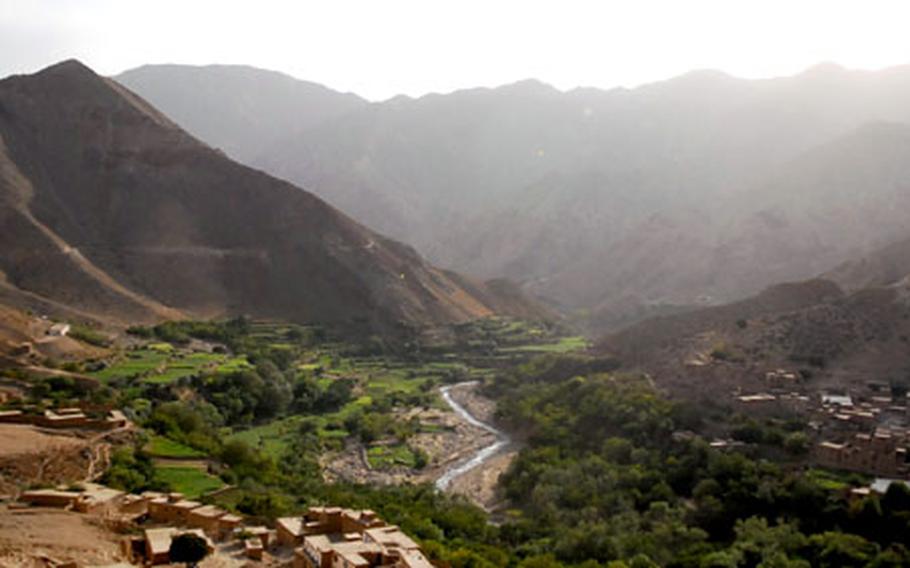 Another view of the Panjshir Valley. (Michael Gisick / S&S) 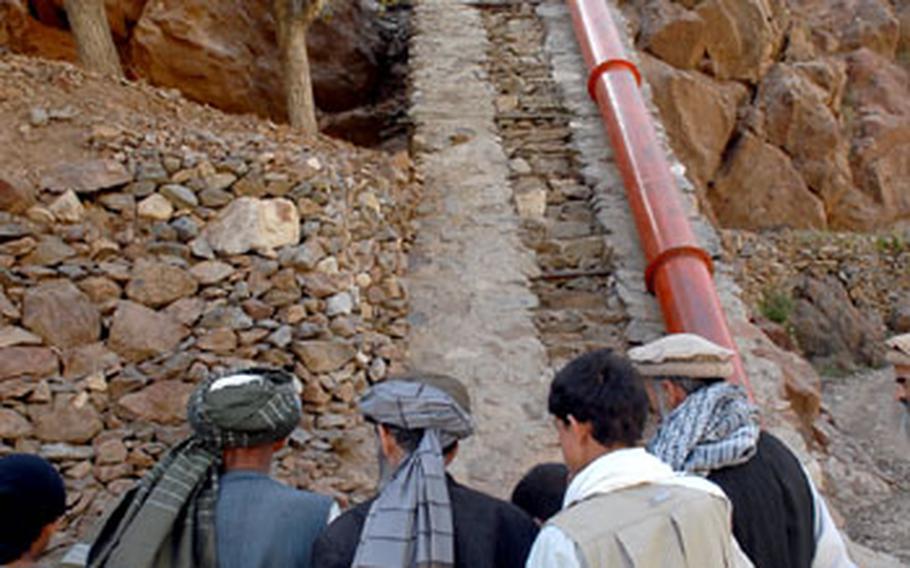 Villagers gather at a "micro-hydro" plant, one of the environmentally -friendly projects U.S. troops are pursuing in the Panjshir Valley. (Michael Gisick / S&S) 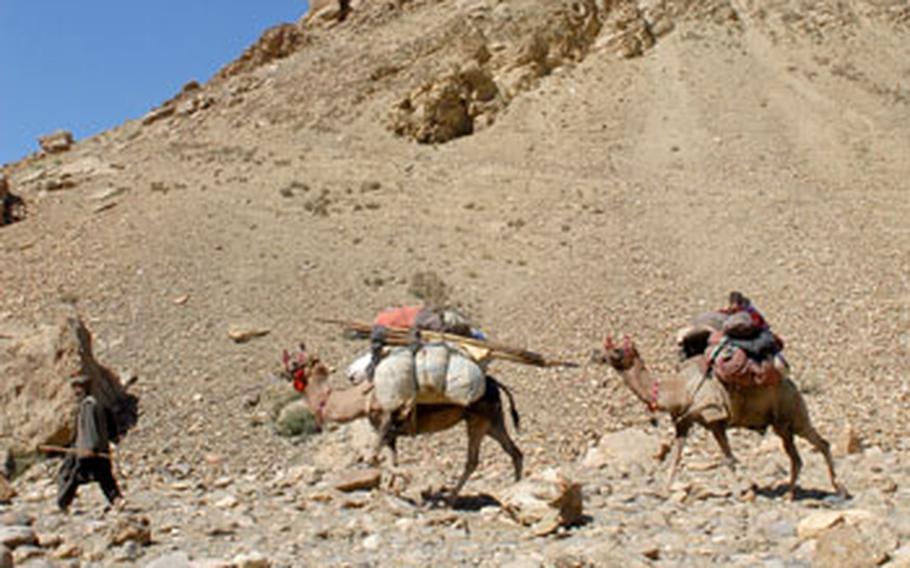 At present, the semi-nomadic Kuchi people, with their flocks of camels, sheep and dogs, are the Panjshir Valley&#39;s main travelers. (Michael Gisick / S&S)

PANJSHIR VALLEY, Afghanistan &#8212; Driving through the Panjshir Valley, the signs of the modern world are few &#8212; the rusting hulks of Russian armor, though not particularly useful, being among the more common.

But increasingly, a more utilitarian brand of modernism has begun to make a tentative appearance. Small solar panels glint from the roofs of many of the valley&#8217;s mud brick homes. A 10-turbine wind farm stands atop a mountain. Rudimentary electrical lines sway across several villages, powered by miniature hydroelectric plants.

With its fleet of gas guzzlers and penchant for causing explosions, the military isn&#8217;t generally known for its Earth-first attitude. But in the remote Panjshir, many of the projects being pursued by a U.S. Provincial Reconstruction Team have taken a decidedly eco-friendly direction.

Besides the windmills and solar panels, they include ultraviolet water purification systems, a tree planting effort and several initiatives to jump-start the valley&#8217;s agricultural production.

If it all sounds like part of a master plan for someplace in northern California, that&#8217;s not the point. With little modern infrastructure to tie into, members of the reconstruction team say small-scale, sustainable development is the only thing that makes sense.

"Our focus is on trying to improve people&#8217;s day-to-day lives, but obviously we also want to do that in a way that makes sense environmentally," says Army Maj. Nicholas Dickson, 33, of The Woodlands, Texas, a civil affairs officer with the Panjshir PRT.

Still, the nature of the projects being pursued here also reflects the scale of the challenges facing reconstruction efforts across much of Afghanistan. Whereas the rebuilding effort in Iraq has focused, for example, on expanding the country&#8217;s electrical grid, in Afghanistan there is no grid. And, after more the two decades of war in a country that wasn&#8217;t terribly advanced to begin with, there&#8217;s not much of anything else either.

The most recent Human Development Index released by the United Nations placed Afghanistan 174 out of 178 nations, describing it as "one of the worst in the world."

Most of the projects here will do little to boost Afghanistan&#8217;s gross domestic product, but U.S. troops and locals say they&#8217;re making a difference. A single "micro-hydro" plant, several of which have been built along the Panjshir River, can provide electricity for 500 people, enough to power most of the villages here, while having little effect on the river&#8217;s flow.

A $3 million plan to plant fast-growing hybrid poplar trees will provide building materials and firewood during the valley&#8217;s harsh winters, officials say. And projects like beekeeping, poultry farming and fruit drying will help boost the incomes of families struggling to rise above subsistence while reinforcing the valley&#8217;s traditional agricultural economy.

Other, potentially more environmentally disruptive projects are also afoot. The province&#8217;s governor is lobbying for construction of a major hydroelectric dam that could significantly alter the narrow valley. And U.S. officials hope that expanding and improving the valley&#8217;s network of roads will jump-start mining, which focuses on emeralds and lead.

But, Kaskel adds, "the future of the valley lies underground."

Many of the U.S. troops serving among the Panjshir&#8217;s dramatic mountains, lush fields and sparkling rivers also can&#8217;t help but see another sort of potential. Admittedly, it would take some geopolitical rearrangement, but the valley is a natural for adventure tourism, they say &#8212; the southern Colorado of Central Asia. And after all, it wasn&#8217;t so long ago that Afghanistan was a main stop on the "hippie trail."

"They could have ski slopes, hiking, rafting," says Air Force Staff Sgt. Dorothy Silva. "Whether they realize it or not, these people are sitting on a gold mine."