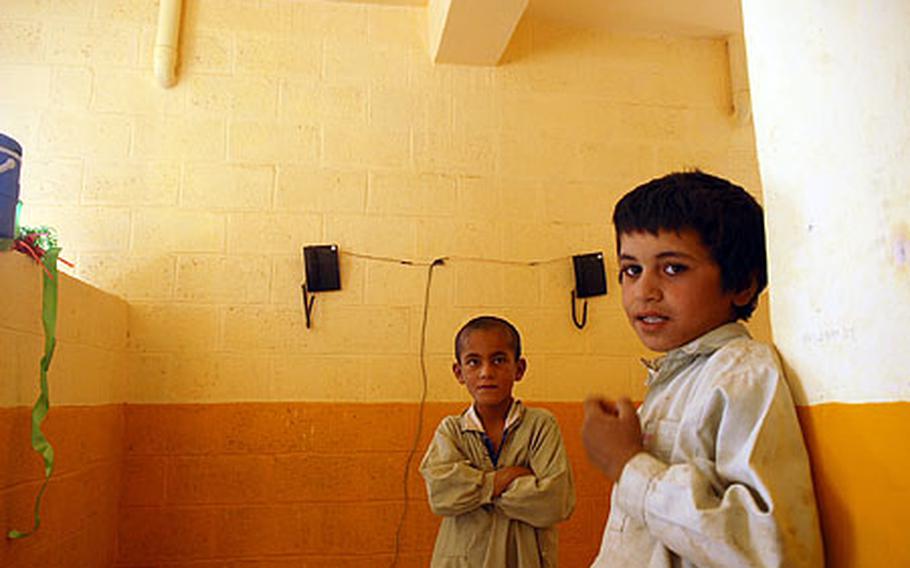 Two Afghan boys view the interior of a new telecommunications center that was opened recently in the village of Lash-e-Juwain. (Monte Morin / S&S)

Two Afghan boys view the interior of a new telecommunications center that was opened recently in the village of Lash-e-Juwain. (Monte Morin / S&S) An Afghan man covers his face with a shamaugh during a recent sandstorm in the village of Lash-e-Juwain. (Monte Morin / S&S) 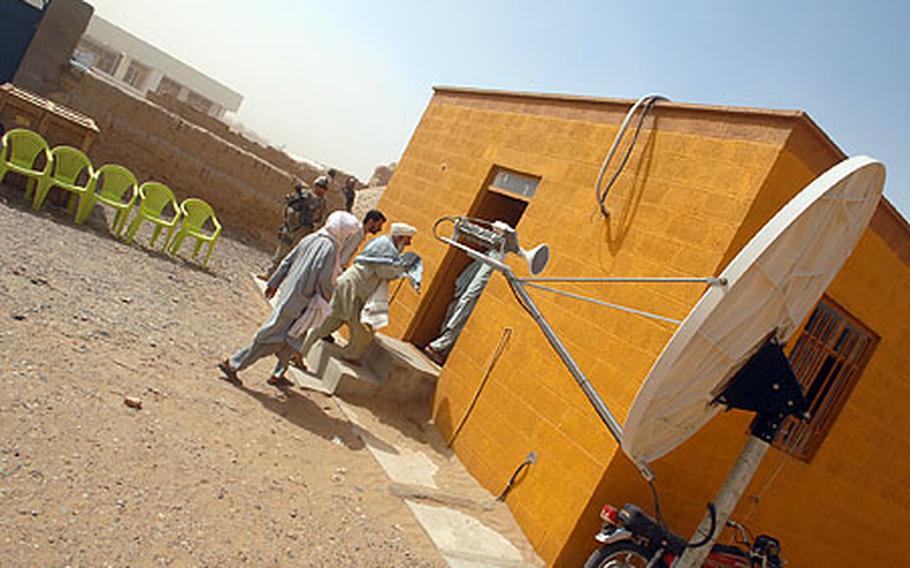 Afghan villagers troop into a newly opened telecommunications center in Lash-e-Juwain. Officials with the Farah Provisional Reconstruction Team hope to build such centers in each district of Farah Province. (Monte Morin / S&S) 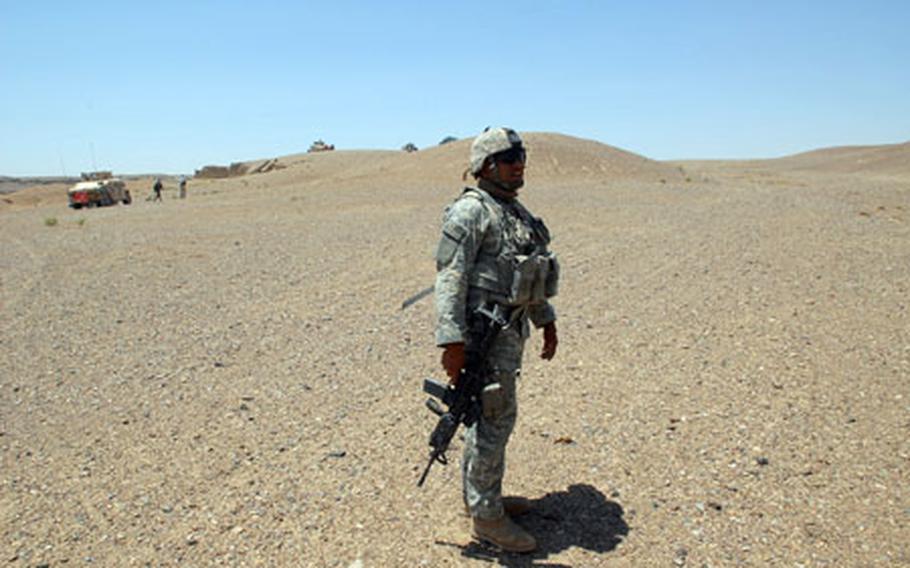 On the map, the highway leading to the village of Lash-e-Juwain was a bold, red line cutting neatly through southwest Afghanistan.

In reality, the &#8220;highway&#8221; was a worn and rutted trail that plunged and climbed through flour-soft sand dunes, rocky wastelands and mesa-studded desert under a blistering sun.

As the convoy of 7-ton Humvees rattled and clanked down the roadway, thick clouds of dust boiled up from their tires and poured into their open gun hatches.

When the vehicles finally reached their destination after a five-hour haul, the Arizona Army National Guardsmen were greeted with a sandstorm that blasted grit into their ears and beneath their clothing.

A few of those locals who braved the storm to watch the soldier&#8217;s arrival wore welding goggles for protection.

As the security element of the Farah Provincial Reconstruction Team, Company D of the 1st Battalion, 158th Infantry Regiment has seen its share of needy villages and dusty roads in the last four months. The provisional reconstruction team, or PRT, has one of the largest areas of responsibility in Afghanistan &#8212; roughly the size of West Virginia &#8212; and has covered thousands of miles initiating new construction projects and encouraging cooperation between the province&#8217;s 500,000 residents and Afghanistan&#8217;s central government.

On Tuesday, soldiers from Company D escorted civil affairs officers and a civilian coordinator for the U.S. Agency for International Development to a newly built telephone communications center roughly 20 miles from the Iranian border.

The small, blockhouse communications center sported five telephones, rigged to a satellite dish. For 10 to 15 cents a minute &#8212; not a small sum in a country where $5 a day is considered to be a good wage &#8212; villagers can make national and international calls to relatives, friends or government agencies. The PRT hopes to establish similar communications centers in each of the province&#8217;s eleven districts.

Aside from the sandstorm, the ribbon cutting went off without a hitch. However, not every mission is as quiet.

When Company D underwent three months of training at Fort Bragg, N.C., before deploying to Afghanistan, they were told that Farah province had been quiet since the fall of the Taliban.

Since arriving in this remote western province, however, the company has encountered two car bombers, several roadside bombs, and at least one rocket attack. The Afghan National Army and police units working alongside the company have suffered even more attacks. Two weeks ago, eleven Afghan soldiers and police were killed in a heated battle with Taliban forces along one of the province&#8217;s main highways. Several dozen enemy fighters were killed in same battle.

Of particular concern is the village of Shuwan, roughly 40 kilometers east of the PRT&#8217;s tiny compound. The village sits on one of the province&#8217;s two paved roadways, and has seen heavy Taliban activity in recent months. Officers say the enemy distributes its own newspaper in the area and has laid numerous explosives for passing vehicles. It was also at this village that Afghan and Taliban forces squared off recently.

The Farah region is also known for intense heat. But, the Arizona-based guardsmen say they are used to extreme heat.

&#8220;People who just came back from leave told us that the temperature in Arizona is still comparable to this,&#8221; said Staff Sgt. Bill Williamson, 40, of Scottsdale, Ariz.