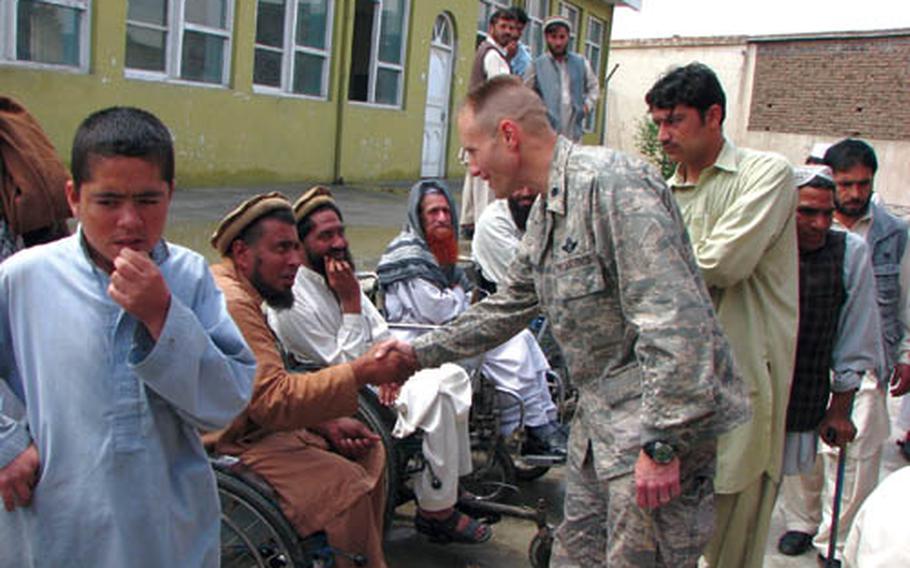 Lt. Col. Paul Donovan, Nangarhar Provincial Reconstruction Team commander, shakes hands with Afghan men during a ribbon-cutting ceremony for an $80,000 facility that will house more than 200 disabled men who had been sleeping in tattered tents. (J. Elaine Hunnicutt / Courtesy photo)

Teams of soldiers and airmen throughout Afghanistan are making strides restoring provinces devastated after more than 30 years of war and conflict, say Pacific troops deployed to the country.

The Provincial Reconstruction Teams are paving roads, repairing schools and building friendships among the Afghans, especially with the children.

"They seem to be the most excited or interested when our convoys roll into their villages," said Capt. Gary Moore of 5th Air Force out of Yokota Air Base, Japan, in an e-mail to Stars and Stripes.

"Seeing the children made me realize these kids are innocent and no different from those in America," he said. "I&#8217;m sure most parents from every nation just want to see their children grow up healthy and happy." Moore is a lead civil engineer for the PRT at Bagram Air Field.

For the past two and a half months, Moore and the other 80-plus members of the team have been working with the Parwan province government to establish health clinics, restore wells and refurbish damaged and decaying infrastructure.

Part of the team&#8217;s mission is to strengthen the elected government and restore trust among the locals, Moore said.

"People are a little hesitant to trust that the process will work," he said. "That is why we focus so much time and effort on increasing the capability and capacity of government at all levels." Locals are encouraged to voice their needs &#8212; from a school to running water &#8212; to government representatives who work with the PRT to develop a plan, Moore said.

"Projects are prioritized, built and maintained by Afghans for Afghans," he said.

The collaboration between the PRT, government and locals bridges a cultural gap that can be challenging for the team, Moore said.

The Bagram PRT is spending more than $17 million on rebuilding projects in Parwan and Kapisa, where it has completed more than 60 jobs, including repaving roads, building district centers and supporting agricultural growth.

In the Nangarhar province, which borders Pakistan, a PRT has been improving security and reconstructing roads and schools since 2004.

The province has about 2 million people and a bustling metropolitan capital, Jalalabad, which boosts a flourishing merchant and business industry.

Electricity and roads continue to be a priority for the people of Nangarhar, Air Force Lt. Col. Paul Donovan, commander of the Nangarhar PRT, said in an e-mail to Stars and Stripes.

Solar panels and generators provide electricity to most rural areas that lack reliable power, said Donovan of the 353rd Special Operations Group at Kadena Air Base on Okinawa.

But greater improvements are under way, he said.

During the next five years, the PRT plans to develop micro-hydro turbine and later, large-scale watershed and dam projects that will provide affordable power across the province, Donovan said.

"There&#8217;s always more to do than manpower available or equipment allows," he said.

For Donovan, with 19 years in the Air Force, the gratitude from locals who now have light in their homes or the smiles on children&#8217;s faces who have a new school to attend give him the greatest satisfaction.

"They truly appreciate the fact that coalition forces will leave their families for a year to help rebuild their country," Donovan said.

Provincial Reconstruction Teams began coming to Afghanistan around 2002. There are 26 teams in Afghanistan and another 25 in Iraq.

The teams are primarily staffed with military personnel accompanied by State Department employees and other civilians, including workers from the U.S. Agency for International Development.