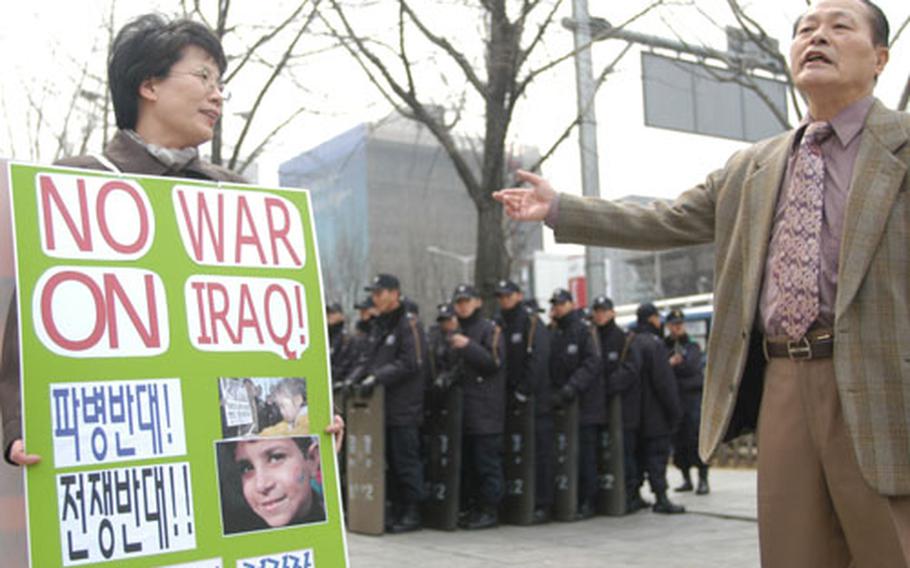 Hur Jin&#8217;s heated harangue burst from a street corner near the U.S. Embassy in Seoul on Friday afternoon, as the 62-year-old Korean man dished out a piece of his mind to an anti-war protester.

The protester, Chong Kang-cha, who stood alone among dozens of young riot police, waited impassively as Hur ranted on his belief that the U.S.-led war against Iraq is justified to maintain the world&#8217;s safety. She merely averted her eyes as Hur&#8217;s voice rose to a commanding crescendo, lavishing praise on Bush.

Hur stamped his foot, saying North Korean leader Kim Jong Il should be next on the Bush hit list, shouting &#8220;Hallelujah&#8221; after his speech.

Three older men &#8212; attracted by Hur&#8217;s impassioned tirade &#8212; stopped by to lend their support. One said he remembers eating food provided by U.S. soldiers when he was 3 years old.

The debate summarizes a divided South Korean population, one that is both praising and criticizing the U.S. war against Iraq. At the same time, tensions with North Korea over its nuclear development have strained South Korea&#8217;s relationship with the United States.

On Friday, a number of protests were scheduled at U.S. military installations throughout South Korea.

About seven people gathered at Yongsan Garrison, the main U.S. Army base in Seoul, using a large, horn-shaped speaker hooked to a car battery to blast anti-U.S. slogans toward main post. Signs slammed the U.S. war against Iraq, while the protesters jeered the American presence in South Korea.

Added to the mix are talks of moving U.S. soldiers stationed near the Demilitarized Zone south or possibly reducing the number of troops here now, U.S. and South Korean officials have said. The protest &#8212; and the attack on Iraq &#8212; come at the height of the U.S. military&#8217;s Foal Eagle exercise in South Korea, designed to sharpen defenses in case of a North Korean attack.

&#8220;The evermore reckless saber-rattling of the U.S. imperialists is, in a nutshell, a premeditated move to mount a pre-emptive nuclear attack on the DPRK,&#8221; according to the Korean Central News Agency, the official North Korean mouthpiece.

On Thursday, South Korean president Roh Moo-hyun stuck by the ally he criticized during his campaign last fall. South Korea supports U.S. actions against Iraq, Roh said, and he plans to contribute 750 noncombat soldiers to the effort.

National Security Adviser Ra Jong-yil said a battalion of 500-600 military engineers and about 150 military medical officials will be sent to the war zone within seven to 11 weeks.

&#8220;We believe that this action by U.S. and the international community is inevitable after diplomatic efforts failed to promptly eliminate Iraq&#8217;s weapons of mass destruction,&#8221; Roh said.

A citizens group handed out copies of a letter it wrote to Bush, which was mailed to the U.S. Embassy. It read, in part: &#8220;The duty of a major nation must be to exert itself for world peace by talks without it repeating a fault again.&#8221;

Some high school students attempted to hand a petition to the embassy but were denied by police. Arguments broke out between the protesters and police after they were stopped from crossing the street.