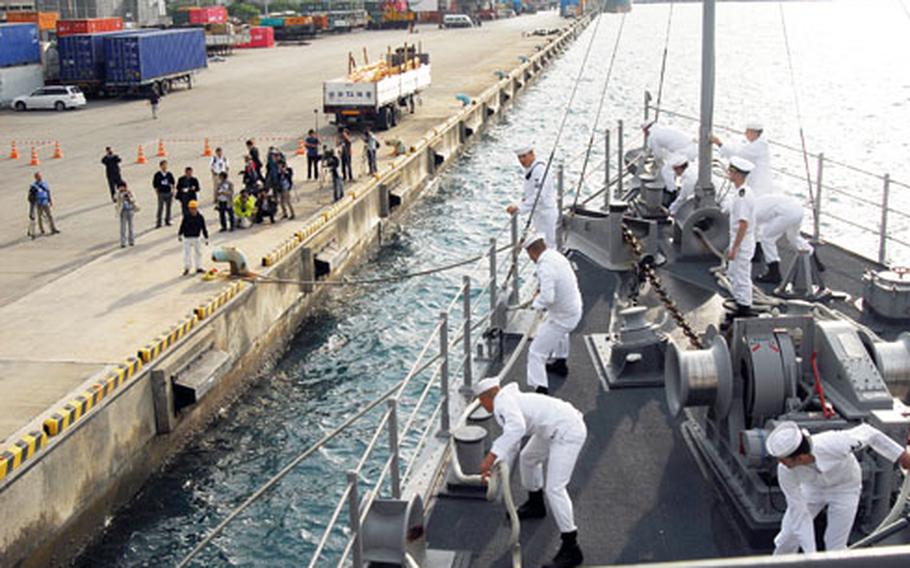 Sailors from the deck department of the USS Patriot, a minesweeper, haul lines Friday to moor the ship to the pier at the Ishigaki port facility. The Patriot and the USS Guardian arrived Friday for a three-day port visit. Their arrival was attended by nearly 100 protestors objecting to the visit. (Denver Applehans/Courtesy of the U.S. Navy)

A goodwill port visit by two U.S. Navy minesweepers at Ishigaki was greeted Friday by a ripple of protesters who blocked the port gate and demanded the vessels leave.

About 100 protesters rallied Friday morning near the pier, preventing about 84 sailors aboard the ships from disembarking and Navy and local officials from entering the dock, said Ishigaki police and port officials.

The island, 465 miles southwest of Okinawa, is home to about 48,000 residents and is a popular tourist destination.

"They can certainly protest," Applehans said. "We believe in freedom of speech just like the Japanese do."

The sailors are scheduled to participate in a community service project and cultural events, but residents have said the presence of warships makes them nervous.

The U.S. visit sparked a protest campaign launched last month by Ishigaki Mayor Nagateru Ohama, who said the military presence would disrupt the port&#8217;s commercial and tourist use. He even wrote to President Barack Obama.

The port call, initially scheduled April 1-3, was pushed back by two days after Ohama objected, saying the space had been scheduled for cruise ships.

Gov. Hirokazu Nakaima said in a statement Friday that the port should be strictly for commercial use unless there is an emergency.

Protesters rallied for nearly nine hours, voluntarily clearing out and dwindling in numbers to around 20 before the gate was opened around 5 p.m., city port officials said. Police reported no injuries and no arrests.

U.S. consul general to Okinawa Kevin Maher was at the port to welcome the ships and help coordinate an exchange between local government and U.S. Navy officials, said consul spokesman Thomas Kreutzer.

"It is absolutely ordinary. We do ship visits all over Japan all the time, so this isn&#8217;t anything special," Kreutzer said.

Stars and Stripes reporter Natasha Lee contributed to this story.