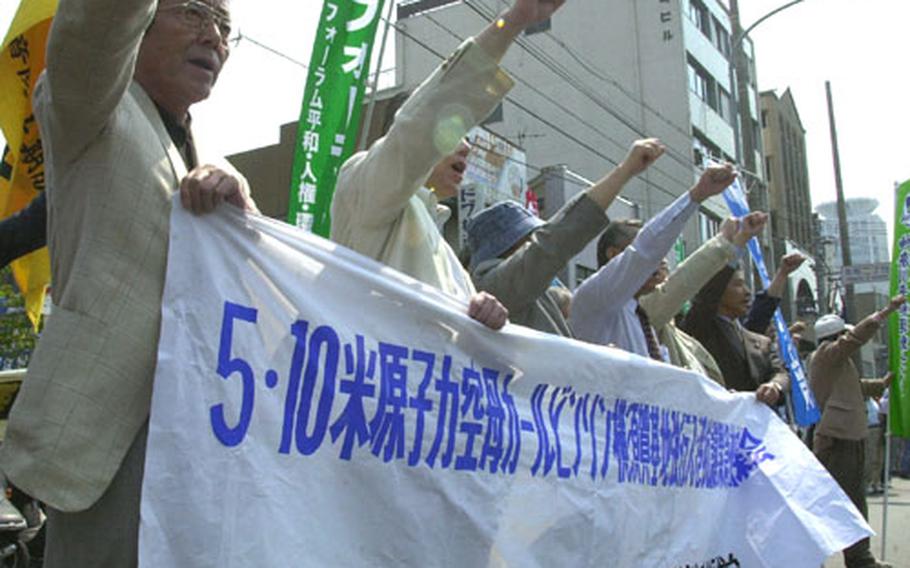 Japanese demonstrators chant slogans protesting the arrival of the USS Carl Vinson, the war in Iraq and the presence of U.S. Navy forces in Japan. (Joseph Giordono / S&S)

Japanese demonstrators chant slogans protesting the arrival of the USS Carl Vinson, the war in Iraq and the presence of U.S. Navy forces in Japan. (Joseph Giordono / S&S) 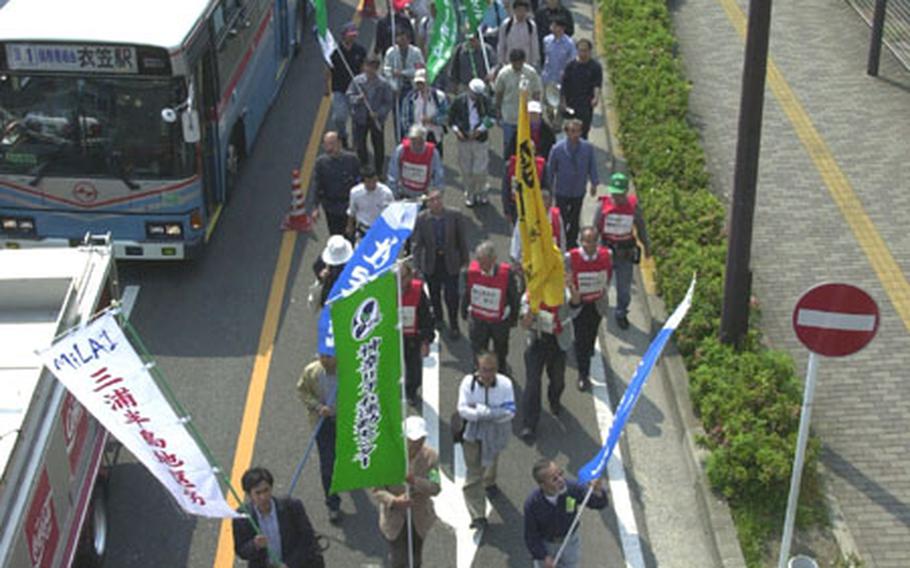 Protesters march toward the front gate of Yokosuka Naval Base on Saturday. (Joseph Giordono / S&S)

YOKOSUKA, Japan &#8212; Hundreds of well-behaved Japanese protesters marched outside the front gate of the U.S. naval base at Yokosuka on Saturday afternoon, voicing their opposition to the arrival of the USS Carl Vinson, the war in Iraq and the presence of American forces in Japan.

&#8220;A nuclear carrier is just a poorly constructed nuclear power plant,&#8221; said Mizuho Fukushima, a member of the Japanese Diet.

The United States is trying to base a nuclear carrier in Japan, she added. Navy officials have consistently claimed that no decision has been made on a replacement for the conventionally powered USS Kitty Hawk, which is scheduled for decommissioning in 2008.

In January, the nuclear-powered Vinson deployed to the Western Pacific to maintain an aircraft-carrier battle group presence there after the Kitty Hawk was ordered to the Persian Gulf.

Navy officials said they expected the protest, but it was smaller than anticipated. Earlier in the week, organizers spoke to about 2,000 or more marchers.

&#8220;The demonstrators are expressing their right of free speech, which is guaranteed them in a free society,&#8221; said Cmdr. David Wells, a spokesman for Commander, Naval Forces Japan, headquarted at Yokosuka. &#8220;The U.S. Navy and [Japan Maritime Self-Defense Force] serve to protect such basic freedoms.&#8221;

But most of the focus was on the war in Iraq.

&#8220;We are protesting the Kitty Hawk itself because it directly participated in the war in Iraq,&#8221; said Shinichi Obara, a member of a Miura Peninsula labor union that marched on Saturday.

The demonstration coincided with thousands of sailors from the Vinson, USS Antietam and USS Ingraham pouring out the front gates on liberty. For many, it was their first time in Japan, and they were somewhat bemused by the proceedings.

&#8220;Nobody knows what the [expletive] they&#8217;re chanting. Maybe more people would listen if they knew what they were saying,&#8221; said one sailor, as he chuckled and took photos of the protesters.

Most sailors accepted handbills &#8212; translated into English &#8212; from the protesters, but quickly crumpled them up or stuffed them in pockets.

Still, many protesters said it was important to voice their opinions.