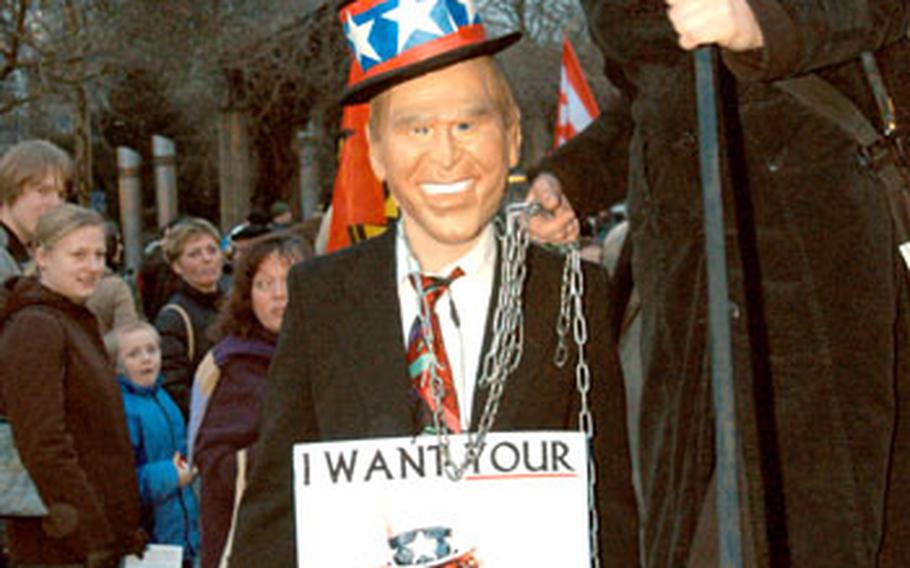 Two anti-war protesters, dressed-up as George Bush and the Grim Reaper, wait for a protest march to begin in Frankfurt. (Michael Abrams / S&S)

Two anti-war protesters, dressed-up as George Bush and the Grim Reaper, wait for a protest march to begin in Frankfurt. (Michael Abrams / S&S) Carrying a banner reading, "There is no way to peace, peace is the way," anti-war protesters march in Frankfurt, Germany, on Monday. (Michael Abrams / S&S) 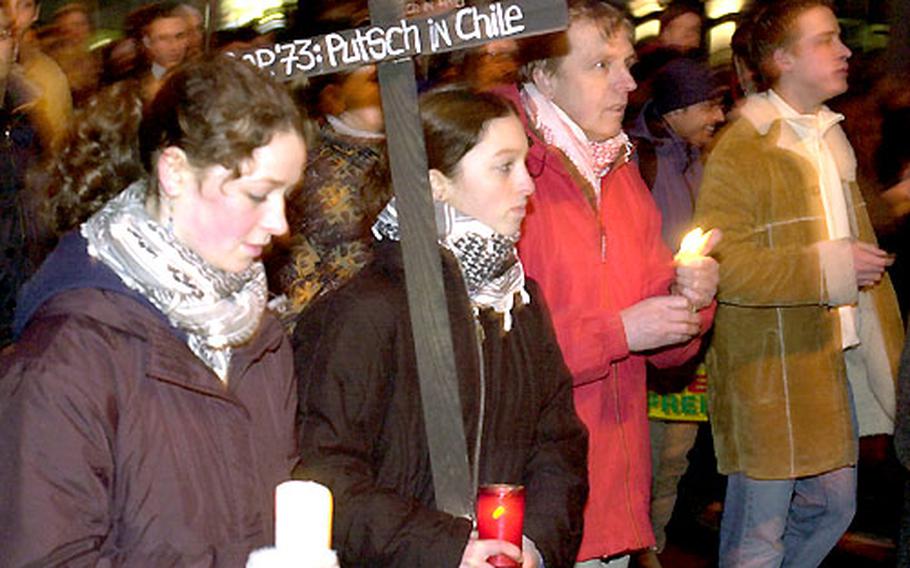 Carrying candles and crosses with what they consider to be past acts of American aggression written on them, anti-war protesters march in Frankfurt, Germany, on Monday. (Michael Abrams / S&S)

With a potential war with Iraq looming, thousands of Europeans are voicing their displeasure over U.S. policy by taking to the streets. Some of those streets are near U.S. bases, although servicemembers say the protests have not affected them much.

Besides seeing e-mails warning soldiers to stay away, Army Staff Sgt. Bruce Punday, assigned to the 415th Base Support Battalion provost marshal&#8217;s office at Pulaski Barracks, said he has not given the protests much thought.

In Germany, where the majority of American forces in Europe are stationed, the government has come out against any action in Iraq. And there have been many demonstrations in larger cities and in front of U.S. facilities.

The Kaiserslautern military community, which includes Pulaski, has had two protests in the last two weeks. Both were outside Ramstein Air Base.

Some locals are a little more enthusiastic about the protests than others.

Watching an estimated 3,000 anti-war protesters in Frankfurt pass by Monday evening, an elderly German who only wanted to be identified by his first name, Erwin, said: &#8220;I really don&#8217;t want war either, but why do they (the protesters) have to be so anti-American? Someone has to do something about Iraq.&#8221;

In England, protests and anti-war demonstrations have become as common as royal scandals. One is planned for Monday outside the main gate at RAF Lakenheath, home of the 48th Fighter Wing. A big one was held Sunday at RAF Fairford, west of London, home of the 424th Air Base Squadron.

About 1,500 people took part, said 1st Lt. Jake Martinez, but it was mainly peaceful. A few people managed to get on the base and a few were arrested.

Mostly, the protests have become part of the landscape.

A few signs, he said, invited the Yanks to return to America, but the main thrust is anti-war, not anti-American.

But the protests are for naught, said one Englishman.

He characterized the protests as 90 percent anti-war, with only a bit of anti-Americanism thrown in.

In Italy, Premier Silvio Berlusconi is a strong supporter of the U.S. administration like British Prime Minister Tony Blair. The Italian leader is scheduled to meet with Bush in the next few days in Washington.

That hasn&#8217;t stopped thousands of Italians from protesting against a possible war with Iraq, though many of the protests have come in larger cities such as Milan and Rome where there are no U.S. bases.

Navy facilities in Naples and Army bases in Vicenza and Livorno have been targeted, mostly by peaceful marchers outside the gates.

Aviano Air Base hasn&#8217;t seen many high-profile protests. And airmen don&#8217;t appear to be too concerned.

Airman 1st Class Bryan Meyer said he sees more protests on television than he does near his base. He said he thinks it is important to listen to what people are saying, even if you have a different point of view.